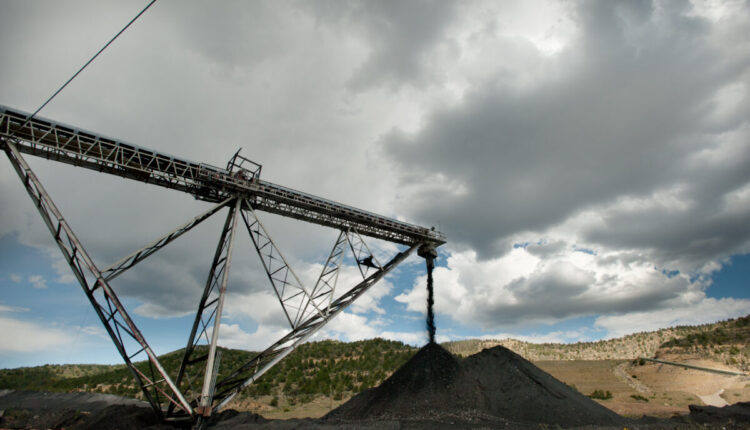 This undated photo shows a plant that processes raw coal and coal waste to produce char, which can be burned in coal power plants at a 75% reduction in pollution, according to South Ogden-based Blue Sky Energy Corp.

Alan Hall, chairman of Prosperity 2020 and president of Weber State University’s Board of Trustees, speaks at a press conference aimed at improving college graduation rates, at the Utah State Capitol on Tuesday, Dec. 16, 2014.

This undated photo shows a plant that processes raw coal and coal waste to produce char, which can be burned in coal power plants at a 75% reduction in pollution, according to South Ogden-based Blue Sky Energy Corp.

Alan Hall, chairman of Prosperity 2020 and president of Weber State University’s Board of Trustees, speaks at a press conference aimed at improving college graduation rates, at the Utah State Capitol on Tuesday, Dec. 16, 2014.

SOUTH OGDEN — It’s not exactly a green revolution, but the CEO of a new Utah company says there’s plenty of societal value in making a variety of far-less-polluting uses of coal and coal waste.

A processing plan, scheduled to open next month in Carbon County, may lead a global metamorphosis toward environmentally maximized coal products, according to the developers.

Consider coal waste, the parts of raw coal that power plants can’t use, said Alan E. Hall, a venture capitalist and entrepreneur who started Ogden-based MarketStar 34 years ago and other companies since.

“There are 60 billion tons of coal waste on the planet, and that waste is polluting the ground, the water supply, it catches on fire,” Hall said in an interview this week. “We see several thousand plants worldwide ingesting that waste, cleaning it up and producing non-fuel-burning products from it.”

Hall, of Roy, is CEO of Blue Sky Energy Corp., which launched this month. Its first plan, in the Price area right in the heart of Utah’s coal country, will be producing coal char, crude coal oil and natural gasses by the first of the year, Hall said.

Renuva Energy Corp., of Salt Lake City, developed the patented technology that Hall’s company has licensed to build the network of processing plants. “He has tremendous resources and a tremendous team to really push this whole thing forward,” said Steve Savage, Renuva’s CEO.

Hall said Blue Sky is working with coal mining companies to supply coal and coal waste for the plants and that the company is talking to PacifiCorp as a potential purchaser of char to burn in its coal power plants. Crude oil output will be sold to refiners, such as Chevron Oil, and much of the natural gas from the processes will, he said, be used to power the Blue Sky plants.

One plant will be able to annually ingest 75,000 tons of coal refuse, generating more than 24,000 tons of industrial-grade charcoal, 187,500 barrels of crude oil and volumes of commercial gasses, including butane, methane and propane, according to Blue Sky’s projections.

“We have sufficient funds to build 2,000 plants,” Hall said. The company intends to open 300 plants across the United States within five years and another 1,200 in coal-mining countries around the world.

“We will make money on this, but our goal is to be charitable, to turn this back into the depressed and impoverished mining communities,” Hall said.

Shanny Wilson, economic development and tourism director for Carbon County, said locals are excited about the Blue Sky project. “We think this is going to benefit our economy immensely,” she said. “I feel like this is going to open doors for economic growth and job opportunities.”

Blue Sky is advertising for plant workers, and Hall said he has hired 12 executives to manage the planned national and global rollouts.

“At a high level, the big point here is that we don’t have enough green energy to keep us going in the economy — we’re not there yet,” Hall said. “What we’re doing is an interim, temporary thing until we come up with other, better ways of producing energy to replace fossil fuels,” Hall said.

Coal is plentiful around the world and the extraction infrastructure will persist for decades, Renuva said. Renuva and Blue Sky can make an immediate impact on the environment now by implementing cleaner processes and boost any coal-producing country’s domestic energy production, according to Renuva.

Savage said the Renuva approach has moved through headwinds, resulting from unsuccessful or disingenuous “clean coal” ventures elsewhere. “So many companies say they have been the ‘clean coal’ solution, but they’ve put a bad name on clean coal,” he said.

But the Renuva and Blue Sky operations will be “almost 100% emissions free,” he said. “We are doing this without putting anything into the air.

“So when people ask, ‘Can clean coal work,’ yes, we have a verified process,” Savage said. Plus, there is no down side and plenty of incentive for everyone to deal with the “mountains and mountains of coal fines that you can’t do anything with,” he said.