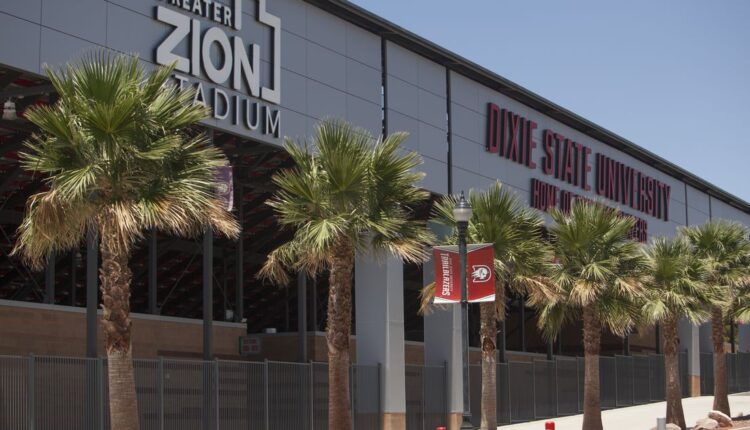 Dixie State University’s new name could still include ‘Dixie’ after all, with changes to bill

After weeks of refusing to hold a hearing on the bill, the Utah Senators finally let go of Monday and tabled a move that would allow Dixie State University to potentially change its controversial name.

However, their vote only took place after substantial concessions and legislative revisions. The updated version of HB278 would essentially require the university to start the renaming process again – back to point one, to form a committee to investigate the issue and gather more community input. And it no longer prevents the final name from still including “Dixie”.

This amendment was approved by Senator Don Ipson, R-St. George representing the area where the university is located. He opposed the name change and was a major force behind efforts to block the bill.

Ipson insisted that in order for HB278 to move this session forward, the name “Dixie” must remain a possibility, as the people of southern Utah, who want more influence over the name they claim as part of their region, are advocating it Identity.

And if the university still decides to ditch “Dixie” after going through the new process and hearing from these people, the new language in the bill requires the school to set up a “Heritage Committee” to set up focused on how to proceed “to preserve the heritage, culture and history of the region on the institution’s campus, including the regional meaning of the term”. These efforts would receive $ 500,000 from the state.

Rep. Kelly Miles, R-Ogden, the sponsor of HB278, told members of the Senate Education Committee Monday that he felt these changes and requirements “strike a really good balance.” And Ipson also said in a statement that he now supports it.

“It allows for additional public input and conversation,” added Miles. “We recognize the great heritage of southern Utah and the Dixie community. … But we realize that times are changing. And that’s where we are. “

With a 6: 1 vote, the bill will now be passed on to the entire Senate for voting. It has to be done quickly when the session ends on Friday. The measure was adopted at the beginning of last month from 51 to 20 years.

The Dixie State government has officially announced that it will change the school name because of its ties to the Confederation and the slave-owning American South. However, the publicly funded university at St. George has no authority to do so without legislative approval.

The university notes that the name change on the 12,000-strong campus “was never intended to erase our great history, but rather to offer our students a better future.”

Last year, a study was carried out that found that 64% of respondents outside of Utah associate the term racism. It also concluded that the name was causing problems for students recruiting jobs and graduate schools in other states. Approximately 22% of the most recent out of state graduates said a potential employer raised concerns about the appearance of “Dixie” on their résumé.

It even happened after the school stopped using the Confederate flag in 1993 and the Rodney the Rebel mascot in 2007, Dixie President Richard Williams told the committee on Monday. The racist images it once adopted are gone, he said, but the name still holds the ties and raises questions. And he thinks it’s time to move school away from it.

“I didn’t look for the name or wanted to change it, but after much thought and study and talking to many people, I think we need to change the name of our institution,” added Williams, noting that he knew it was a strong one Kickback would be exposed to start the process.

The president noted that many local residents believe that the term “Dixie” means something different in Utah than it does in the south. But 19th-century pioneers in southwest Utah also grew cotton, and some of the region’s early settlers were slave owners.

Williams believes celebrating all of this past hurts current students. He wants the school to keep growing – its student body has grown 40% in the last five years – and become competitive in the region. It has the lowest tuition fees in the state, making it a great affordability asset. He believes sticking to “Dixie” is holding back that progress.

“We need a name that reflects the future of our university,” he said. “This does not negate our legacy.”

More than 40 people attended the committee meeting on Monday to speak during the public comment period. Those on either side of the debate said their legacy linked them to the issue.

Grant Bess noted that his ancestor was one of the first white settlers in the area. And he said the same ancestor was involved in the mountain meadow massacre in which Latter-day Saint Church of Jesus Christ militia killed about 120 California immigrants in 1857 in what is now Cedar City.

“I know when it is best to acknowledge the mistakes of our ancestors,” said Bess.

Bess also noted that he was taking a few classes and getting credits at Dixie State, but he chose to finish his bachelor’s degree elsewhere because of the name.

Elizabeth Dahlberg, a Dixie State graduate and former recruiter, said she didn’t include the school’s name on her resume either. And she fears it will deter color students from going to what she saw firsthand when she tried to get some to apply in the past. She said she enjoyed her time at university, but “removing a name doesn’t erase those memories from my life.”

Athletes, the student body president, the current Miss Dixie State, and Washington County’s tourism director also voted for a name change, as did the president of the NAACP Salt Lake City office. Many also gathered outside the Capitol last week to drop “Dixie”.

Sione Siake, a current student at DSU who identified himself as a Tongan American, said he wanted to support his school and wear t-shirts with the logo – but he wouldn’t with the name. “Students should be able to go anywhere and be proud of their name and institution,” he said.

Opponents countered, however, that the abandonment of “Dixie” is an attempt to erase the institution’s history and a misguided response to a “politically correct” culture war that has already resulted in Utah’s Dixie Regional Medical Center in it Year changed its name to Intermountain St. George Hospital. (A representative from the hospital spoke to the committee on Monday to support the removal of “Dixie” from the university as well.)

Greg Brooks noted that he is the fifth generation of his family to live in St. George and that his ancestor Samuel Brooks was one of Dixie State’s earliest students in 1911 when it was originally the St. George Stake Academy. (Samuel Brooks was also the inspiration for the new groundbreaking mascot after it was changed by the Confederate soldier.)

Brooks said he opposes the change and wants the state to stand by its legacy – the name was changed to “Dixie” in 1913 – which he does not consider racist. He also believes the process has been speeded up and the local community “has not been given adequate time to explain how we are feeling”.

Part of it has to do with how the school decided to rename it. After completing the study, the Dixie State Board of Trustees unanimously voted to drive the change forward. That was then approved by the Utah System of Higher Education. The measure had to come into the legislature next, as neither the school nor the university authorities had the power to make it final.

The public could sway on Capitol Hill, but residents said they should have had their say on the Dixie State plain before moving on. They also say they haven’t been given enough time to represent the legislature.

In the committee meeting on Monday, for example, all speakers were limited to 60 seconds during the public comment phase due to the number of interlocutors. The discussion lasted almost two hours and the chairman of the committee tuned out to give both sides the same time, but some said it was “not the way democracy is supposed to work”.

Tim Anderson, a St. George attorney who had driven four hours from southern Utah to attend the meeting, questioned both the time limit and the process of changing the Dixie State name.

“It is quickly undermining the heritage, tradition and culture of Southern Utah,” he said. “It’s a name that shouldn’t just be let go” because there is currently a “culture break” fad.

Others said the university would lose money from donors and spend millions on renaming. Some pointed to the same study Dixie State relied on, which also found that 62% of the population in the area preferred to keep the name. Many said the university had continued to grow and the name didn’t stop it.

Bailee Basile, a current student, said she was labeled a racist for supporting the name. But she continues to stand by it and wants the university to know that others like her are here now.

Miles, the billing sponsor, told the committee Monday that he didn’t think the process should be based on popularity but on impact. If a student is injured, he said – and he believes many have the name – the state should step in and act. “We will wholeheartedly acknowledge that this is not a popularity contest,” he added, noting that most students and alumni would vote against it.

But the name change, he added, “has been on the horizon for years.”

Sens. Mike McKell, R-Spanish Fork, and Derek Kitchen, D-Salt Lake City, both spoke out in favor of the bill. McKell said the new changes will allow more community input by starting the process over and discussing all options, including “Dixie,” before choosing a name. He wants those who oppose change to know that they are being heard and that their legacy is important.

Senator John Johnson, R-Ogden, chairman of the Senate Education Committee, said the voice of the ward should be the most important and he’s not sure if residents are being heard fairly by the university. He was the one who voted no.

Next, when the move passes the entire Senate and goes to the governor for signature, Dixie State would have to form a committee to further investigate the name and seek more input. A new name recommendation should be received by the legislature no later than November 1st for a new vote.