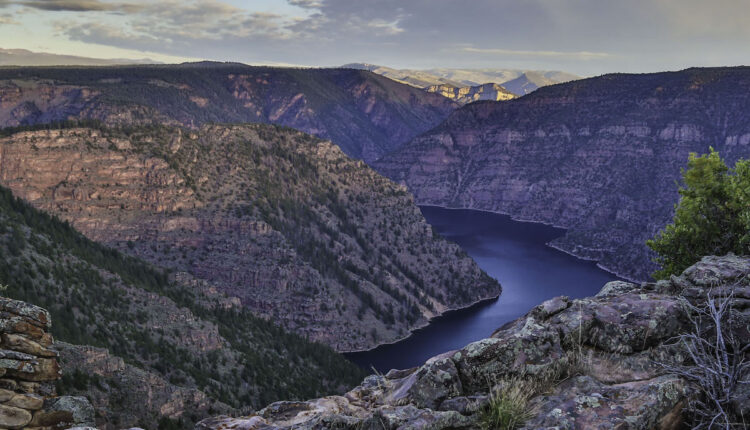 The US Bureau of Reclamation will release an extra 500,000 acre feet of water from Flaming Gorge Reservoir to help maintain hydroelectric generation at Lake Powell’s Glen Canyon Dam amid drought conditions that have parched the West for more than two decades.

The action will draw down Flaming Gorge Reservoir’s surface about 10 feet by August and possibly a total of 15 feet later in the fall, according to the BOR. News of the Flaming Gorge release follows calls on two other river systems in Wyoming in April. Those actions were also prompted by “supply side” water shortages due to persisting drought and lower snowpack.

Flaming Gorge Reservoir, the largest in Wyoming with a storage capacity of nearly 3.8 million acre feet of water, is well-suited to provide extra flows to help address supply shortages on the Colorado River, according to former Wyoming State Engineer Patrick Tyrrell, who represents Wyoming on the Upper Colorado River Commission.

“There will be no additional regulation for municipalities or irrigators or industry in the Wyoming part of the [Colorado River] basin because of what’s going on at Flaming Gorge,” Tyrrell said. “However, we have to be vigilant.”

The release from Flaming Gorge is part of an “unprecedented” water conservation effort on the Colorado River, which serves tens of millions of people in the American southwest and northern Mexico.

In addition to the release from Flaming Gorge, the BOR will withhold 480,000 acre feet of water in Lake Powell, while Colorado River Lower Basin users have agreed to increased water conservation measures. The Upper Colorado Basin 2022 Drought Response Operations Plan will remain in effect until early 2023.

“We have never taken this step before in the Colorado River Basin,” Interior Department Assistant Secretary Tanya Trujillo said during a press call on Tuesday. “The conditions we see today, and the potential risks we see on the horizon, demands that we take prompt action.”

Flaming Gorge Reservoir on the Utah side near the dam in September 2021. (Dustin Bleizeffer/WyoFile)

The surface elevation at Lake Powell recently fell to 3,522 feet, the lowest since construction of the Glen Canyon Dam in the 1960s. Water intake ducts at the dam’s hydroelectric power station would no longer function if the lake’s surface level reaches 3,490 feet, according to the BOR.

The rebalancing of water supplies between the Upper Basin — which includes Wyoming — and Lower Basin stakeholders is necessary to ensure hydroelectric generation and water supply for the LeChee Chapter of the Navajo Nation and the city of Page, Ariz., the BOR said. Stakeholders in all seven Colorado River Basin states, along with partners in Mexico, agreed to BOR’s conservation actions for this year through a process spelled out in the Colorado River 2019 Drought Contingency Plan.

Although the BOR’s authority over the Colorado River water storage system didn’t require Wyoming’s approval for the drought contingency actions, Wyoming supports the effort, said Tyrrell, adding that it is also in the state’s interest.

“We can’t sit by and just keep [Flaming] Gorge full while everybody else below us is drying up,” Tyrrell said. “Protecting the power pool Lake Powell is really an ultimate goal for all of us — from compact compliance, to the power grid, to funding for reclamation, to environmental programs. Lake Powell is a very key component in that river.”

The water in Flaming Gorge Reservoir is almost entirely appropriated to the BOR’s Colorado River water storage complex, as spelled out in the 1922 Colorado River Compact, Tyrrell said. That means the primary purpose of the reservoir is to backfill Lake Powell when needed.

“I think that there’s probably an expectation, because of 50 years of operating the Gorge as we have, that it will just simply always be full,” Tyrrell said.

This year, that won’t be the case.

The BOR released an extra 125,000 acre feet of water from Flaming Gorge Reservoir between July and October 2021 as part of the same Colorado River drought contingency plan. That dropped the surface level by about 5 feet.

As of May 5, the average daily release from Flaming Gorge Reservoir will increase from 850 cubic feet per second to 1,800 cfs, according to the BOR. The reservoir’s surface elevation was 6,018 feet on April 5, or 78% of total storage capacity.

“We can’t sit by and just keep [Flaming] Gorge full while everybody else below us is drying up.”

Wyoming’s primary concern is how much time it will take to replenish the reservoir, Tyrrell said. There are no restrictions for water users upstream of the reservoir, and the rate of inflow from runoff and precipitation events portends a slow refill, according to forecasts. Inflow rates are estimated at 84% of average for April, 48% of average for May and 53% for July, according to the BOR.

Absent precipitation that beats current forecasts, the reservoir’s surface is estimated to fall 10 feet by August and possibly by 15 feet later in the year. That level of decline isn’t expected to negatively impact the fishery, according to local anglers. However, it could make boating access more difficult in the long run if there are multiple years of extra releases combined with lower-than-average refills.

“For now, it doesn’t really change much,” longtime Flaming Gorge angler Chris Taylor said. “Every single boat ramp on the lake will still be accessible. They’ll still be connected to the water.”

Flaming Gorge Reservoir is a key component of the economy and culture of Sweetwater County, Taylor said. There’s a flotilla of watercraft on the lake during a typical summer day with people water skiing, jet skiing and angling for mackinaw trout, kokanee salmon and smallmouth bass.

Locals enjoy all of the perks of the reservoir, Taylor said, and sometimes forget about its main purpose — to backfill Lake Powell.

“But the water drawdown isn’t going to affect much unless it’s like 50 feet,” said Taylor, a University of Wyoming student who plans to work at the Buckboard Marina at Flaming Gorge this summer. “Everyday after my shift, I’m going out and casting a line.”

Local events and things to do this week, May 8-14