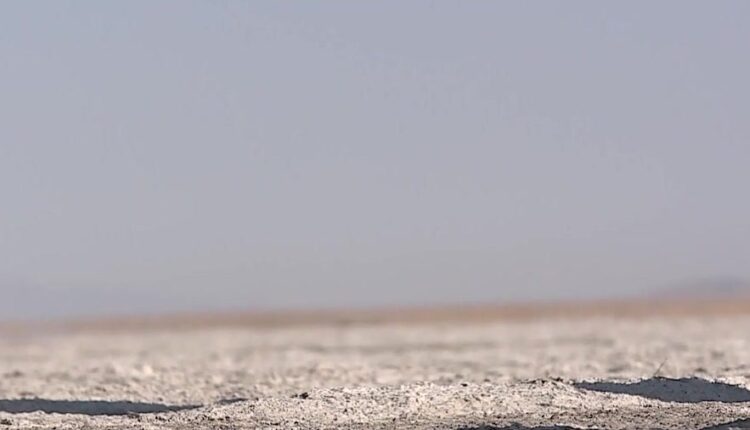 FARMINGTON BAY — If you only view the Great Salt Lake from above, you’ll miss the greatest threat to the air we breathe here in northern Utah and beyond. But researchers are conducting a study on the ground level that aims to save the lake through education, one mile at a time.

When you veer off the beaten path on the fringes of Layton and Syracuse, chances are you’ll find Kevin Perry.

“It’s actually unfortunate how few people explore their own backyard.”

He’s made it his mission to dive right into what used to be a body of water but boats have long had no use here. The transportation of choice for this professor of atmospheric sciences at the University of Utah is a bicycle known as a “fat bike” — a research tool necessary to traverse Farmington Bay.

Perry invited us along for the ride.

“We are now at least four miles away from any water… in Farmington Bay,” Perry said as we crossed hundreds of yards of dry, flat earth.

Water flowing from the Jordan River used to spill into this lake bed, but now, the narrow channel pools somewhere on the far side of Antelope Island. The lapping waves of this former marshland now only come from the heat radiating off its stark surface. And that’s where the real problem is revealed — what looks like a packed, hard, salty playa can actually be pretty fragile.

As we pedaled, Perry pointed out dust hotspots again and again — places of particular concern that he believes make up as much as 9% of the now exposed lake bed.

“When the wind comes along, it starts to pulverize this,” Perry said. “The dust is dangerous when the concentrations are high (in the air we breathe), regardless of what it’s made out of.”

Check out my story about the dust danger from the Great Salt Lake… It’s not just the annoyance of poor air quality we’re worried about.

The shrinking lake could pose a real risk for generations of Utahns. Watch @KSL5TV News at 10 to see how to save the lake with action today pic.twitter.com/pBunPm9ugU

Dangerous now to the young, the elderly, and those with breathing issues, but potentially deadly down the road as this dust is filled with cancer-causing, naturally-occurring arsenic.

“Ten years ago, we weren’t talking about dust plumes coming off the Great Salt Lake.”

And it may take a decade to turn things around.

Perry uses his bi-weekly research, equipped with a state-of-the-art dust storm simulator, to educate colleagues, the general public, and really anyone who will listen about the ticking time bomb that’s not far off.

California drained Owens Lake, essentially poaching the water from the Sierra Nevada mountains to fuel growth in Los Angeles in 1913.

That diversion of water created decades of what was the greatest source of dust in North America.

With all of the attention on the population center of LA, it was easy to try to ignore the toxic cloud casting a long, dangerous shadow.

Now, Owens Lake has water again, and that’s what Perry told me would be the solution to our toxic dust problem.

“I was seriously considering a future name change for Salt Lake City to Dust Lake City because that was the future we were going to be facing.”

That dire designation isn’t how Perry feels now with more than a dozen laws and state statutes put in place just this session to address the water crisis.

And it’s not just about the dust. It’s the fragile ecosystem and millions of migratory birds that stop and feed here in northern Utah.

And it’s about generations to come, believing that “this is [still] the place” to put down roots and raise a family.

No reduction in population seems possible as Utah is still the fastest growing state.

So, conservation will be critical to bring the water back here.

Perry’s got an answer for those who don’t believe they live close enough to the lake to be bothered by that poor air quality and potential toxins.

“It will affect everyone from Tremonton to Brigham City to Ogden and all the way down to Salt Lake City and Provo.”

Megadroughts are a part of the history of North America, and Perry believes we will have more rain than snow in the decades ahead. But past periods of severe drought have lasted anywhere from 30 to 70 years.

“Eventually, the rain will return. But the question is will this ecosystem still be alive when those rains return. We have the power to make choices to put more water into the lake now when it’s needed the most.”

This article is published through the Great Salt Lake Collaborative, a solutions journalism initiative that partners news, education and media organizations to help inform people about the plight of the Great Salt Lake — and what can be done to make a difference before it is too late . Read all of our stories at greatsaltlakenews.org.

After ‘a Lot of Doors Shut in Our Face,’ Crusading Couple Celebrate Passage of Burn Pit Bill