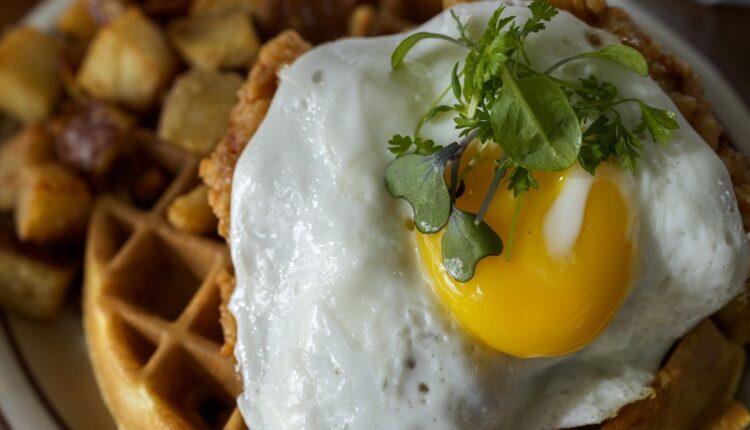 Five Utah brunch restaurants to add to your weekend plans

It would be challenging to find a Utah restaurant that doesn’t serve brunch — whether the classic eggs-and-potatoes or more elaborate buffets.

Some of the people responding to The Salt Lake Tribune’s informal Twitter poll picked out some popular specialties. They included: The corned beef hash at Silver Lake Lodge, the Croque Madame at Eva’s Bakery and the lemon pancakes with caramel sauce at Lazy Day Cafe.

Many people cited eateries that no longer exist — such as Blue Plate Diner or Bill & Nada’s — showing brunch-spot loyalty is undying.

Here are five brunch spots that are worth a try. We omitted some of the classic spots — such as Ruth’s Diner, Eggs in the City or The Park Cafe — in favor of places a bit more unusual. And we chose these five for their basic quality, and to offer a range of food options and price points.

Chef Milo Carrier’s raison d’etre is cooking with fruits, vegetables and proteins from the local foodscape — and doing that in Utah can be a challenge, unlike San Francisco and New Zealand, where he spent time before returning to Utah. He’s determined to make it work, though, using the output of local farmers, including Amanda Theobald from Top Crops, Zach Hartlyn from BUG Farms and Tyler Montague from Keep It Real Vegetables. Because his menu is extremely seasonal, it’s extremely flavorful — and always changing. One thing you can count on is simple but high-quality ingredients used in imaginative ways, like sweet waffles made with cornmeal and topped with whipped creme fraiche, strawberry jam and candied peanuts.

Early rising seems like the antithesis of brunch, but Hub & Spoke gives you an incentive (maybe even if you have a hangover) with a $6.99 special served between 8 and 9 am It serves classic American brunch fare — biscuits and gravy, build-your -Own omelets, mimosas and bloody Marys — along with such Southern dishes as Kentucky hot brown, shrimp and grits, and chicken and waffles. It also has a full in-house espresso/coffee bar (and if you’re a coffee drinker, you know nothing can ruin a great brunch like good food paired with bad coffee). Like Arlo, Hub & Spoke sources produce from local farms and cooks from scratch.

Located 45 minutes up the canyon from Salt Lake City, Snowbasin doesn’t just feed your stomach — it feeds your eyes and nose and sense of adventure, and the need to be out in nature (in this case, on the eastern side of the Wasatch range). It takes some planning, though. Reservations can be made as far as two weeks out, but are definitely recommended 24 hours in advance (though there are some walk-in tables available on Sunday). Cost is $75 for adults and $40 for kids 5 to 12; that includes the gondola ride to the lodge, plus the brunch buffet and beverages. The menu varies from week to week, based on what the chefs have received from local community-supported agriculture groups; food prep, including omelets, are prepared with lots of drama and flair at stations throughout the lodge. For fun and spectacle, this one can’t be beat — and the food is top-notch, too.

Utahns don’t lack for vegan options, but the brunch at Piper Down is a little bit of a sleeper. Owner Dave Morris is vegan himself, so he sets a high standard for what he serves up — and true to the pub’s inspiration, that even includes a completely plant-based version of a traditional Irish breakfast. Piper’s brunch is definitely on the heartier comfort food side of things — even for vegans leaving meat and animal fats out of the equation — and, of course, offers a huge drink menu for those who subscribe to the hair-of-the-dog theory of hangovers. Because it serves traditional bacon-and-eggs brunch plates, it’s also a diplomatic choice for those households (you know who you are!) containing a mix of vegans and omnivores.

How could we do a brunch roundup without a brunch-only restaurant? The creation of Michael McHenry, the restaurant entrepreneur behind Ginger Street and Dirty Bird Fried Chxx, Sunday’s Best is open seven days a week during nontraditional brunch hours (read: during breakfast). The idea here is brunch as a concept rather than tradition — its motto is “brunch hard,” and the brightly colored interior is meant to evoke a resort and all the R ‘n’ R that suggests. The menu, created by chef Tyler Stokes of Provisions, really does have something for everyone: simple egg sandwiches, steak and eggs, overnight raw oats, paleo-friendly almond flour pancakes, and the wow-iest dish, a 36-ounce Tomahawk ribeye for two. That last item clocks in at $99, but the good news is there are plenty of accessible priced dishes as well. The drink menus are just as wide-ranging as the main menu, and both feature a lot of local, or fairly local food sourcing, from Table X bread to meat from Idaho’s Snake River Farms and DOMA Coffee Roasters.