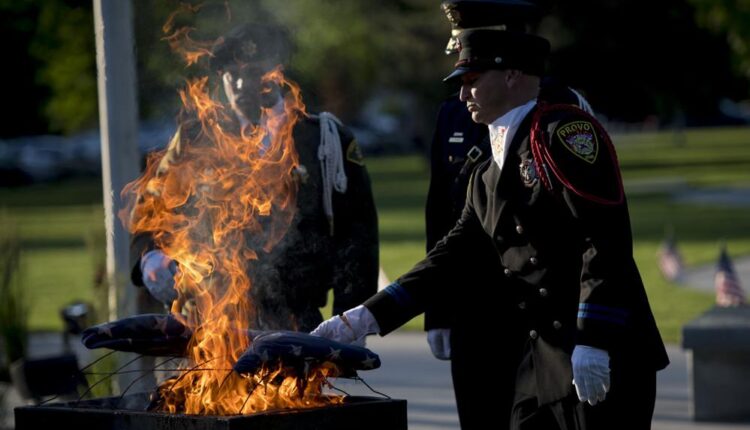 After years of service and the rigors of the elements, many flags are torn, torn, and ready to retire.

Residents are invited to experience this unique event and see why many people swear allegiance to the flag.

Every year for the past three decades or more, the America’s Freedom Festival in Provo has invited residents with flags who have seen better days to be donated to this special ceremony, the festival said.

The retirement ceremony is specific, with only one flag used in the ceremony to represent all of the other flags that are subsequently collected and burned.

As with the event on Monday, the ceremony should take place outdoors, preferably in conjunction with a campfire program, and, according to official government guidelines, be very special.

Just before sunset, the flag, which flies all day, is withdrawn in the normal ceremonial procedure for that location or group.

According to the protocol, when the flag was attached to the top of the pole, the leader commented:

“This flag has served your nation long and well. It is so worn out that it should no longer be used to represent the nation.

“This flag represents all flags that will be collected and taken out of service today. The honor we show here tonight for this one flag, we show for all flags, including those that are not physically here.”

The American Legion will hold a pre-ceremony program at 6:30 p.m. to honor Cold War veterans with a Cold War pinning ceremony in Utah.

This is a free public event. Refreshments will be provided by Macy’s Food and Drug at the end of the ceremony.