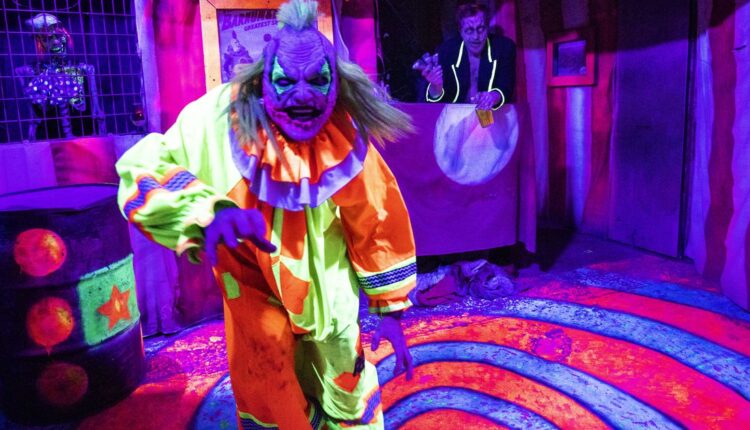 A young woman leans over the top half of a Dutch door, wearing a black cape and waiting for a properly sized silicone mask.

Laryne Larson, one of the lead artists at Salt Lake City’s Fear Factory haunted attraction, is on the other side of the door, which leads into an overflowing Halloween toy box, filled with masks and costumes.

She responds without missing a beat. “Is it your first night in hell?”

This is one of the many conversations happening an hour or so before the doors open at Fear Factory — a juggernaut in the haunted house, or “haunt,” world, in Salt Lake City and outside of it. (In September, the Haunted Attraction Association named it one of 2022′s Top Haunts, and this week Buzzfeed ranked it ninth among its “20 Terrifying Haunts Every Horror Fan Must Visit” in the United States.)

Even people who have never visited Fear Factory may be familiar with its colossal size: Six buildings, some of them six stories high, with two underground tunnels. The complex, which operated as the Portland Cement Works in the late 19th century, is an impressive sight, unmissable by anyone traveling north on Interstate 15 into or past downtown Salt Lake City.

“We kind of stumbled across it,” said Rob Dunfield, who has owned and operated Fear Factory with his wife, Heidi, since 2011. “We were looking for a unique location. I grew up building haunted houses and the very best ones were always the ones that had the coolest atmosphere.”

The Dunfields claim, on the haunt’s website, of a history of deaths in the old cement works’ industrial mechanics — which serves to heighten that spooky atmosphere.

Today the attraction features 12 “scare zones,” each with a different theme — and “hell” is one of them. About a quarter of the haunt is tweaked every year, Dunfield said. Going through them all takes a guest about 40 minutes.

A few steps outside the costume closet, in a room accented with bloody handprints on the gray walls, 14 makeup artists are stationed around the room, filling the air with airbrush and hairspray fumes as they transform actors into monsters.

The actors who are done with makeup wait downstairs for the nightly meeting. One guy is swaying and humming, a mask on his face, and two more in his hands. Near him is someone made to look like an old man with crazy blown out hair, whose schtick is “peeing” on people (using a bottle of warm water). Dunfield said Fear Factory employs between 80 and 100 actors a night, and about 300 per season.

The atmosphere before opening is barely organized chaos, which the cast and crew seem to be enjoying.

Becky Manuel-Barela, who has been with Fear Factory since the beginning and oversees all the makeup work, said each artist works on between 4 and 6 actors — and aims to get each one’s makeup applied in 20 minutes.

They’re efficient, in part because many of the artists trained there as interns, Manuel-Barela said. “We introduce them to new products, new ideas and we do special events courses with them,” she said. Many returning artists have created in-house “look books,” so that other artists can mimic particular designs, she said.

The mentorship and camaraderie are part of what sets Fear Factory apart from other Utah haunted houses, Manuel-Barela said.

“It’s not one person for themselves, it’s everybody,” she said. “We’re a team. We want everybody to succeed.”

(Rick Egan | The Salt Lake Tribune) Lukas Richards looks for someone to scare as guest begin arriving at the Fear Factory on Saturday, Oct. 1, 2022.

Lukas Richards, who is in his second season at Fear Factory, works as a “gate interactor,” spooking the audiences as they line up to enter the haunt. His favorite part is when he scares somebody and they fall over in fright — and their buddies laugh.

Jase Yeates, is in his third season at the haunt, and was a linebacker in high school. At 6-foot-2, he’s imposing even before he puts on football shoulder pads, part of his character, “Tchumobog,” who appears in the hell zone.

Yeates, who retired from the US Air Force after 21 years of service, fell into his role by chance when he brought his daughter to be part of the makeup program.

“My life has been pretty straight-laced, but I love Halloween,” Yeates said. “I’m 50 years old, stepping out of my comfort zone and having a little fun. I can’t think of another job where they would pay me to scare people.”

At the nightly meeting, the actors get a pre-show pep talk. They’re encouraged to tap into their monster superpower as they stretch. The meeting ends with the actors reciting the “FEAR” chant, repeating the four things they bring every night: frightening, energy, awareness and reliability.

Fear Factory can be a full sensory experience, and each sense is meticulously considered: trippy visuals, jump-inducing audio, and — if the guest opts for it — touch. From blinding fog to chainsaw noises, there’s something to scare practically anyone.

Meanwhile, in Midvale, Castle of Chaos, another popular Utah haunt, aims to dial up the intensity for its guests.

Like Fear Factory, Castle of Chaos employs more than 100 people. The audience is different: A mix of older and younger fans, compared to the mostly teen crowd at Fear Factory.

Some of the makeup is remarkably detailed — such as the porcelain doll character (played by Chase Rindisbachner), who has a cut across her forehead with stuffing falling out of it.

“Sometimes they’ll have me design a costume and do a room around it, or vice versa,” said Kat Weeks, Castle of Chaos’ costume designer, who has been “haunting” for more than two decades.

Castle of Chaos has been entirely overhauled this year, Weeks said. The haunt is billed as “Utah’s only underground haunted house,” and the space is much smaller than Fear Factory.

The haunt compensates for its small size with its intensity. For example, there’s one clown, decked in neon colors, with a jacket with the words “Carnival of Chaos” on the back. His mask and laugh are both terrifying.

The castle isn’t as easy to navigate as Fear Factory. It’s darker, and there’s one section that requires guests to crawl — which could send a claustrophobic person reeling.

Owner James Bernard said customer feedback he received in 2007 told him Castle of Chaos should be scarier.

“You’re inundated with blood and guts and gore these days in movies and everything,” Bernard said. “They’ve gotten so much more intense than when I was a kid. So I thought if [they] can actually touch you, then [they] can really scare you.”

In 2009, Bernard set a five-level system, so guests who sign waivers can choose their own experience, based on the amount of scariness they want:

For the true fear junkies, there is an overnight extreme, level 10, called “The Crucible.”

Bernard said he loved haunted houses as a kid, and as a theater and business major, this venture was a natural evolution of that.

“We’re open for the first three hours of the day and then we close,” said Raven West, assistant manager of the escape rooms. “Then we set all the escape rooms for the haunt.”

There are five themes for the escape rooms. West said the serial killer option is the most popular.

The intensity of the small space isn’t surprising, Bernard said, because people’s imaginations are scarier than anything he can do there.

Utah, Bernard said, has an unlikely culture of fear. He cites the Latter-day Saint faith, which “is very big on theater,” he said. “Then you have the counterculture, the witches.”

Bernard added, “Utah’s pretty unique because alcohol is not the number one thing. If you’re looking for that fun, haunted houses are a great alternative. You don’t have to jump out of a plane to get your adrenaline rush. You can go to a haunted house and it’s safe.”