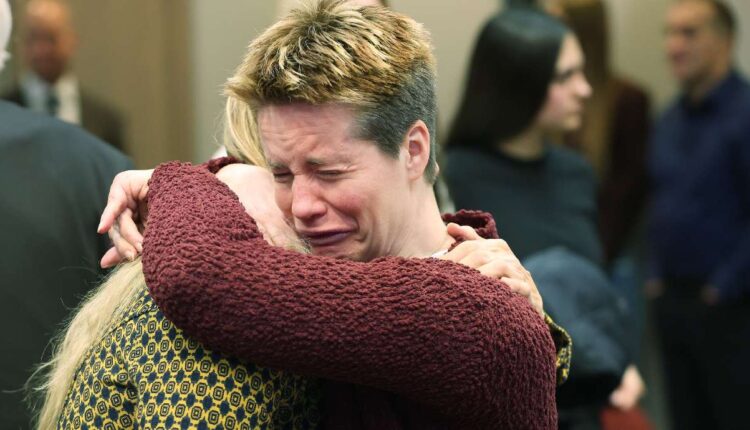 Annie Ferrin is emotional as she hugs a family friend after an apology to their family from the state of Utah on behalf of her mother, Valarie Clark Miller, in Salt Lake City on Tuesday. (Jeffrey D. Allred, Deseret News)

“Valarie’s name was vilified for many, many years,” the Utah businessman said Tuesday. “To finally get to the truth and the bottom of this is gratifying and provides a measure of healing for the entire family. … It’s a measure of justice and accountability.”

On Monday, Miller’s family received a letter of apology from the Utah Department of Public Safety for not conducting a proper investigation in 1990 into allegations that a Utah Highway Patrol lieutenant raped and threatened Valarie Clark Miller more than 50 years earlier when she was 13 years old.

Paul Cassell, University of Utah Law School professor and a former federal judge, worked with Miller’s legal team and said the letter of apology is “the likes of nothing else I’ve ever heard of in the crime victims’ rights field.

On Tuesday, Miller and his legal team spoke for an hour, detailing the case of Valarie Clark Miller which included a PowerPoint presentation and even home video clips from 40 years ago. A large number of the Clark and Miller families were present for the presentation, including Valarie Miller’s 92-year-old father.

Valarie Clark Miller was born in 1954 and raised in Clarkston, Cache County. According to Lambert, Miller was first sexually assaulted by two men at knifepoint in 1968 in the loft of a barn. He says a third man aided in the assault and watched.

John Miller talks to reporters about the apology he and his family received from the state of Utah on behalf of his former wife, Valarie Clark Miller, in Salt Lake City on Tuesday. (Photo: Jeffrey D. Allred, Deseret News)

The men were more than twice her age. One man was her neighbor and a prominent member of town, according to Lambert. At the time of the assault, he had just been hired as a trooper for the Utah Highway Patrol.

Lambert says Miller was sexually assaulted several more times after that and the trooper used his position of authority to threaten her and her family. On one occasion, the trooper stole the family dog and shot it with his service revolver in front of the girl “to demonstrate the seriousness of those threats,” according to the family’s notice of claim.

The investigators say the man continued to sexually assault and terrorize her until she eventually lied and told him she was pregnant. The man “responded by beating Valarie and attempting to drown her in a local reservoir,” the notice says.

No criminal charges were ever filed for the alleged abuse and no one was ever arrested.

In 1975, Valarie Clark married John Miller and by 1984 they had four children together. But in 1985, one of their daughters was hit by a truck and nearly killed. Lambert said the emotionally traumatic event caused Valarie Miller to seek therapy. It was during that time when Miller told her therapist about the abuse that happened when she was a child. Miller ended up receiving treatment at a facility in Kansas for a year in 1989.

In 1990, fearing that someone else might be abused, the Millers filed a complaint with the Utah Department of Public Safety alleging that a man who was then a high ranking member of the UHP was one of the men who assaulted her more than 20 years earlier.

According to Lambert and Anderson, the investigation conducted by the department was completed in just a month. During that time, the internal affairs director of the department claimed that the trooper in question had taken and passed a polygraph test, and that Miller’s therapist had been interviewed and said he did not believe the woman.

The allegations of sexual assault against the trooper were determined to be “not sustained.”

“For Valarie and John, the DPS investigation was their court of last resort and they had recieved the verdict,” Lambert said Tuesday.

At that point, “the Clarkston town gossip continues to spread the lie: ‘She was crazy and made up stories,'” he said. “The decline in Valarie’s physical and emotional and mental health accelerated after this nonfinding. She died a physically broken and heartbroken woman at age 61 on July 7, 2017.”

According to her obituary, Miller died from complications of multiple sclerosis.

In 2020, the Millers’ son encouraged his father to take another look at the case. They hired the investigative team at WardLambert to just look at the case for 30 days to see if there was anything there, John Miller said, even though at this point they knew the statute of limitations for any potential criminal charges had expired.

Anderson said it didn’t take him long to realize that something wasn’t adding up with how the Utah Department of Public Safety handled its investigation.

He spent three hours interviewing the former director of internal affairs for the department. At first, Anderson said the man continued to claim that the lieutenant accused of raping Valarie Miller had taken a polygraph.

“Of interest to me, as that interview wore on, he completely backed off of that statement to the point that at the end of that interview he indicated that he did not believe that (the lieutenant) had taken that polygraph,” Anderson said.

Furthermore, Anderson said the internal affairs director also insisted that he had talked to Miller’s therapist.

“He insisted that that was the fundamental basis — in his words the ‘biggie’ — the coupe de grace, which had caused the closure of that investigation. And he indicated that therapist told him that she was schizophrenic, that she was not to be believed and that these allegations were without any kind of merit,” he said.

“Those statements are just simply false.”

Anderson said the therapist told him that the public safety department never contacted him and that he clearly remembered Miller and believed her allegations.

Anderson also interviewed the lieutenant at the center of the investigation before he died, and says the man continued to deny what had happened and claimed he had passed a lie detector test.

The investigation by Anderson concluded that the Utah Department of Public Safety’s internal affairs investigation lacked “normal, common procedures” and that “a thorough, substantive investigation was not conducted.”

In November 2021, John Miller and his attorneys filed a notice of claim with the state, stating they intended to sue the state. Their lawsuit would include the lieutenant, the former internal affairs director, and former department Commissioner Doug Bodrero, whom Miller says headed the department at the time and was a good friend of the lieutenant.

I have concluded that the factual allegations you raise in your notice of claim and subsequent communications about DPS actions in 1990 rest on a foundation of extensive and disturbing evidence. While it unfortunately appears that there is no legal recourse that I can take to right the wrong that was done to Mr. and Mrs. Miller more than three decades ago, the least I can do is to express my deep regret to John R. Miller and family members of Valarie Clark Miller for the emotional distress suffered by Mrs. Miller, Mr. Miller and the family as a result of the actions described in your notice of claim.

On Monday, the state responded with a letter that Cassell called “quite extraordinary.”

The letter from Utah Department of Public Safety Commissioner Jess Anderson states that a new, thorough investigation was conducted in cooperation with the Utah Attorney General’s Office.

“I have concluded that the factual allegations you raise in your notice of claim and subsequent communications about DPS actions in 1990 rest on a foundation of extensive and disturbing evidence. While it unfortunately appears that there is no legal recourse that I can take to right the wrong that was done to Mr. and Mrs. Miller more than three decades ago, the least I can do is to express my deep regret to John R. Miller and family members of Valarie Clark Miller for the emotional distress suffered by Mrs. Miller, Mr. Miller and the family as a result of the actions described in your notice of claim.”

Anderson further states in his letter that internal investigations are conducted much differently today than 30 years ago and said the department will be hiring an outside agency to review the policies and procedures currently in place.

A photo of Valarie Miller hangs near her children during a press conference about the apology the family received from the state of Utah, in Salt Lake City on Tuesday. (Photo: Jeffrey D. Allred, Deseret News)

When asked if he believes if the department is actually acknowledging that a cover-up took place, Lambert said, “They didn’t use the word ‘cover-up’ or ‘obstruction of justice.’ But if walks like a duck and quacks like duck, it’s a duck.”

For Miller, he says he accepts the apology and will not file a lawsuit. There also will be no legal action against the two men who allegedly raped his wife because the lieutenant died in August and the other man died many years ago. As for the man who they say watched the assault and helped, Anderson says he is currently in prison in Colorado and will be transferred to the Utah State Prison when he is released from Colorado to serve a possible life sentence here.

Miller says when he pursued possible legal action, it was never about getting money.

“It was really about just getting to the bottom about what really happened,” he said, while adding he had four objectives when the investigation started. “First and foremost was to clear Valarie’s good name … and second was to bring a measure of justice and accountability to the assailants and those involved in the cover-up.”

He said the third objective was to help the Clark and Miller families find closure. And fourth was to encourage others who may have been the victims of sexual abuse from years ago that they can still step forward.

“History is a process of searching for the truth and why things happen. Honesty makes better history. Why? The truth matters and the truth sets us free,” Miller said.