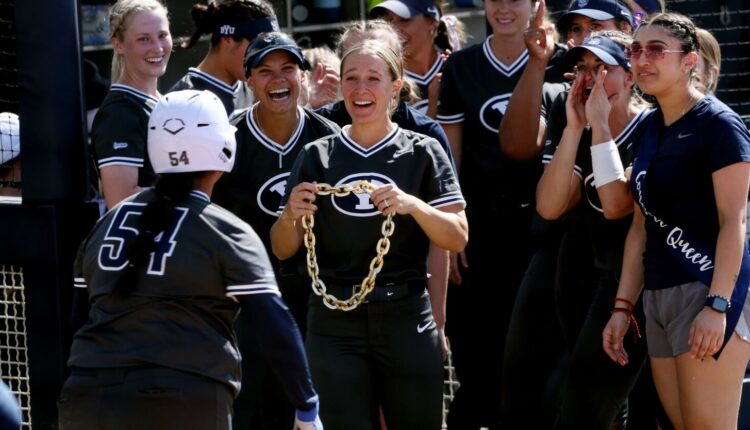 ‘“I like our resiliency’: BYU softball team humming along heading down the home stretch

Like clockwork, the BYU Cougars softball program has reloaded and put together another impressive season.

Over the past few years, the Cougars have fielded quality squads, appearing in the last 16 NCAA tournaments. With just a handful of games left on its schedule, BYU is focused on finishing the season strong with hopes of another NCAA tournament berth.

BYU coach Gordon Eakin feels his roster is full of talent but has a difficult time comparing this team with his former squads.

“It’s really hard for me to say how (this team) ranks,” he said. “But this certainly would rank up there with teams in terms of talent and effectiveness. Right now, we’re on target to have our best win-loss record of any team at BYU.”

The Cougars have not lost more than three games in a row this year, compiling an impressive 35-10 record with just over a week left in the season.

Still, the Cougars’ two straight losses to West Coast Conference foe Loyola Marymount may prove to be more fatal than the school’s three consecutive defeats in February. Both BYU and LMU entered the three-game weekend series in early April with untarnished conference records. After winning the first game over the Lions, the Cougars lost two straight, relinquishing their hold on first place in the league standings — a position LMU has held ever since.

The losses marked the first time BYU has dropped back-to-back conference games since 2016. Since those two defeats last month, the Cougars have bounced back, winning every subsequent game to tie the school’s longest winning streak of the season at 10.

Despite the disappointing losses to the Lions, BYU remained positive. “Our goal is to learn from our experiences every day on and off the field and to get better every day,” Eakin said.

The Cougars’ offense needed to overcome some struggles earlier in the season before blossoming into what is now the 12th best scoring team in the nation.

Cougar pitcher Chloe Temples pitches during game against Iowa State in Provo on Saturday, March 26, 2022. Temples leads the team in strikeouts with 113 in 23 appearances.

“We went through a cold streak in the middle of the year where we just weren’t scoring runs,” Eakin said. “We just stayed at it and continued to work hard. We finally started putting it all together. We started having an offense that was one through nine in the game, instead of just three or four hitters that were doing OK.

“But we went through a cold spell where we didn’t score a lot of runs. So again, I think it goes back to staying at it, working hard, being resilient, overcoming those tough times. We can definitely put runs on the board.”

Down the final stretch of the season BYU will continue to rely on its elite offense. Junior first baseman Huntyr Ava has led the Cougars’ offense with a .397 batting average to go along with 14 home runs and 45 RBI. BYU has received a similar output from sophomore outfielder Violet Zavodnik, who boasts a .386 batting average, 15 home runs, and 46 RBIs.

On the flip side, the Cougars’ defense has been headed by senior pitcher Autumn Moffat-Korth and junior pitcher Chloe Temples. Moffat-Korth has appeared in 28 games, getting the start 23 times — good for helping the Cougars’ contests. She has compiled a 2.04 ERA to go along with 78 strikeouts. Temples leads the team in strikeouts with 113 in 23 appearances.

Eakin feels his team has performed well this year, but believes better days are still ahead. “We’ve played pretty solid softball throughout the season,” he said. “I think our best softball is still yet to be played. I think we have a chance at peaking at the right time.”

BYU will look to reach its full potential and keep its win streak going when it begins a three-game series at Pacific in a three-game beginning Friday. 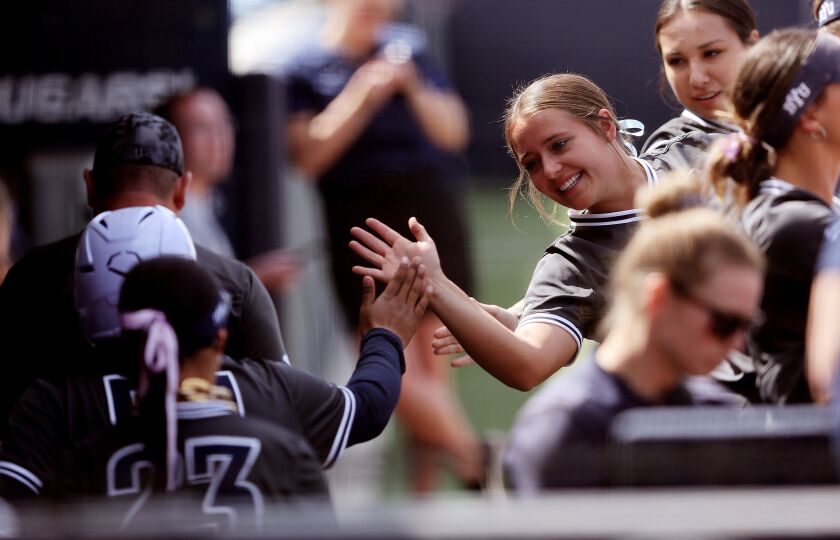 BYU players high-five in the dugout during game against Iowa State in Provo on Saturday, March 26, 2022. BYU won 11-7 and will be heading to Pacific this weekend for a three-game set of WCC games.