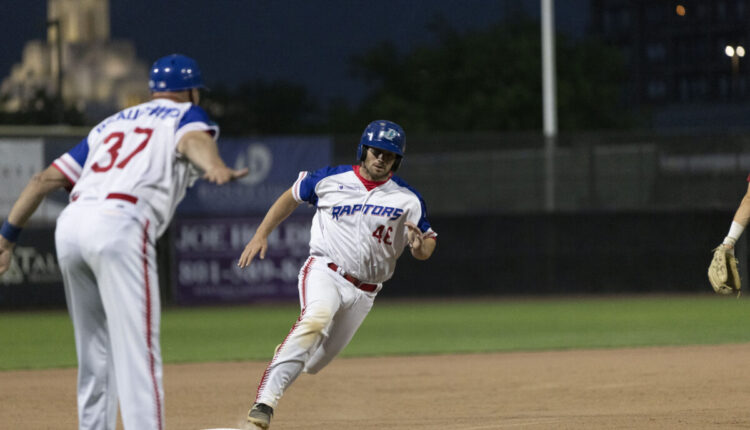 OGDEN — Dustyn Macaluso has played somewhat sparingly in the Frontier League and American Association over the last two seasons. This year, he played in Quebec for the Frontier League’s Trois-Rivieres Aigles (Three Rivers Eagles), hitting .130 in 16 games before his release one week ago.

Sunday at Lindquist Field was a different story.

Macaluso, usually an outfielder, made his debut for the Ogden Raptors, played third base and batted in the No. 9 spot. And with his team rallying in the bottom of the ninth inning, he came up at the bottom of the order.

Macaluso cracked a three-run, walk-off home run to finish the comeback and the Raptors earned a split with the league-leading Idaho Falls Chukars in a 12-10 victory to close the series.

Macaluso hit 2 for 4 with five RBIs, also hitting a two-run double in the second inning. Reese Alexiades started that inning with a solo homer to put Ogden up 3-0 early. That ties Alexiades for the team lead in home runs with Jesus Valdez at six apiece.

Christian Day pitched five strong innings in his start for the Raptors, giving up one run on four hits while striking out four. But he walked the first two hitters of the sixth inning and the snowball of runs that Idaho Falls is capable of rolling began. (Those runners scored, giving Day three runs to his ledger.)

Idaho Falls scored four in the sixth to take a 5-4 lead, though Cirino and Ottesen danced around several bases-loaded at-bats that could have turned into an all-out barrage.

In the bottom of the sixth, Ogden second baseman Dakota Conners tripled in Pat Adams to tie it 5-5. But Hunter Hisky homered for the visitors in the seventh and Feinstein homered off Parker in the eighth to make it 10-6, which seemed to ready the Chukars for a 4-2 series win.

But a role-reversing ninth inning instead got Ogden a 3-3 split, the first series this season Idaho Falls has not won.

Ogden’s Jorge Gonzalez kinked the firehose and, though he gave up a two-out double, struck out two and faced four batters to keep it 10-6 in the top of the ninth.

In the bottom of the ninth, Idaho Falls pitchers Jonathan Nunnally and Keagan McGinnis did not record an out.

Freddy Achecar, Alexiades, Valdez and Jackson Lancaster all singled against Nunnally, with Sonny Ulliana drawing a walk. The singles from Valdez and Lancaster each scored a run to make it 10-8.

McGinnis faced only Macaluso and uncorked a wild pitch with the bases loaded to make it 10-9 and ultimately rob Macaluso of a grand slam. But then came Macaluso’s swing to win the game in front of a Father’s Day crowd of 3,530.

Alexiades hit 2 for 3 and scored three runs. Valdez continued his tear, hitting 2 for 3 with two RBIs and two runs, raising his average to .434 and on-base percentage to .520. Lancaster also had two hits.

Ogden next heads to Grand Junction to play eight games from June 21-26. The Raptors and Rockies will play the regularly scheduled six games, plus make up two where Ogden will play as the home team from games that were rained out May 29-30 in Ogden. The two teams will play seven-inning doubleheaders on Wednesday and Saturday.

Inside the BYU years of Utah’s GOP Senate candidates