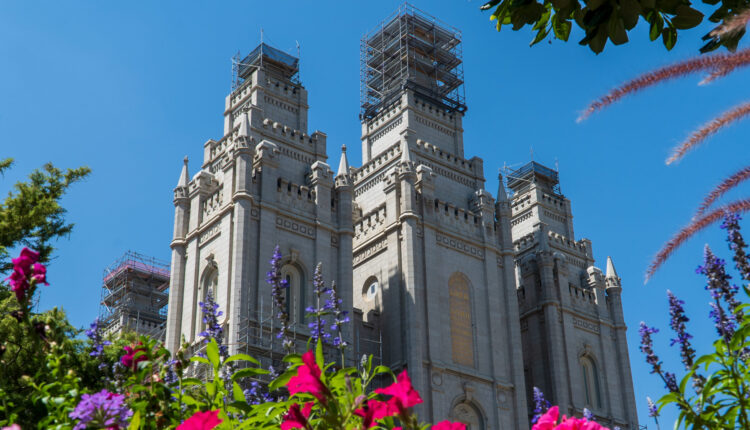 SALT LAKE CITY – The renovation of the Salt Lake Temple is now in its 22nd month. And this incredibly large project helps in every way to connect the past with the present and with the future.

The foundation of the Salt Lake Temple

At the moment, about 16 feet of the temple’s foundation are exposed.

“This is fine work from the 1850s,” said Andy Kirby, director of historic temple renovation for Latter-day Saint Church of Jesus Christ.

At the end of September, he stood in front of the site to talk about ongoing work on Temple Square.

Kirby feels connected to the past as he gazes at the exposed foundation. He knows that the pioneers struggled to plant crops and build their lives while facing multiple challenges.

During the Utah War of 1857-58, construction workers covered the foundation, making the area look like a plowed field. When they dug it up again, they saw where they could improve and added granite.

“What we see there is that it is still sandstone. We know they improved the masonry. You can see that the quality of the masonry is very different, ”said Kirby. “We have now revealed this beautiful work. This foundation has been in place for 168 years and has proven itself wonderfully. “

Most of the work in the first two years of this project was earthwork to get to the foundation. Now you can work on strengthening it so that it lasts even longer.

“I think we hold hands with the pioneering designers, take what they did and improve what they did with the technology we have,” said Kirby. “This is a beautiful, beautiful symbol for past, Present and Future.”

The reinforcement process is called “Jack and Bore”. Forty feet of steel pipes up to four feet in diameter are slowly pushed under the building below the foundation. The crews use mine cars to manually remove earth, rock and gravel from inside the pipe as they continue to push the pipes in.

Workers fill the pipes with high-strength concrete, reinforced steel and tendons. They fill the gap between the outside of the pipe and the surrounding soil with mortar.

Ninety-two of these pipes will support the temple foundation.

Scaffolding surrounds the building so that they can access the entire perimeter at the same time.

The work continues from the bottom up

Kirby said the workers would fix the stone and mortar. They will also repair the windows and install new windows for thermal and acoustic insulation.

Then all the work is done on the top of the building.

“We’re going to be removing a lot of stones and reattaching those stones over the course of the next year, but we’re going to reattach them with steel pins and steel frame systems to better hold the top of the temple together,” he said.

Kirby described how they tied the top of the temple to the bottom; They drill through the stone and insert large cables to re-tension it.

It is an unreinforced stone structure. They reinforce it with steel trusses in the roof. The workers proceed with great care, opening the bays one by one and covering everything that is exposed underneath with a swimming pool cover.

Increased capacity after the completion of the Salt Lake Temple renovation

Workers have excavated the north side of the temple three stories deep. This will be the new addition and will replace what was built in the 1960s.

It took a while to decommission the buildings and then clean up all of the hazardous materials that were inside.

Kirby pointed out the sheeting around the pit, the girder piles and beams, and the thickening process to hold back the soil around the pit.

If it’s three stories, the temple’s use will expand significantly, Kirby said.

“You will need almost all of the space to accommodate the groups and meeting sizes you are hoping for,” he said.

The crews have dismantled a tunnel under the north temple, which is connected to the parking garage of the conference center. It becomes a hallway that is an extension of the temple.

“On this level, the lower level will be two, future customers can park and walk through the tunnel. You can then choose between the east or west baptistery, ”said Kirby. Foundation customers move up one step to their recommendation desk.

They also plan to have two separate pavilions further from the entrance to celebrate wedding celebrations when newly married couples leave the temple.

Endowment sessions for this hugely popular temple will be held in video form in 80 languages.

“Up until this point, the temple patrons had to speak English to participate. Now the temple will be accessible to people who speak many different languages. This is a huge improvement in accessibility for members of the Church, ”said Kirby.

The conference center is now the main visitor center of the Salt Lake Temple.

Many of the items removed from the temple and visitor centers to the north and south are on display in the conference center across the street.

There is an altar, table, doorknob with the beehive symbol, stick, and other historical features with written explanations and context. People can also watch a movie about the temple renovation and its purpose.

The large sectional model of the temple and a statue of Christ are also located in the conference center, as well as many works of art on the balcony level.

“The cutaway model is, we knows, a guest Favourite. It was previously in the Visitor center south and then brought here, ”said Ben Metcalf, director of the Church’s temple visitor centers. “What I love about this place is andYou can see the temple, rYou have a great view of it and then turn around and see what’s going on inside. “

Metcalf said his favorite place in the conference center is likely the roof, from which he can watch work across the street.

“Seeing them dig was really, really fun to see. And it just gets a little louder when they dig deeper, but it doesn’t detract from the guest experience, ”he said.

The location also enables him to observe changes in the steel structures and plates and pipes as they are inserted.

Metcalf urged people to experience more of Temple Square, including the Church History Museum, with its children’s experiences, and the other historic buildings. Those who live outside the region can take a virtual tour.

He said the plans are currently to make the area in the south the new main visitor center. And they will turn the area of ​​the old visitor center north into gardens and contemplative rooms with a focus on Christ and the temple. This vision is also taken into account in the landscaping around the square and the site.

Metcalf said there are currently a lot of talks going on for the open house when the Salt Lake Temple renovation is complete.

“It will be something that will attract so many people from all over the world. It will be a great opportunity for us to welcome people and help them learn a little more about our beliefs and why we believe what we believe, ”he said.

Kirby said it was a historic event. People can bring their friends and neighbors to look inside. The last time church leaders opened the Salt Lake Temple to the public was in the 1890s before its dedication.

“I am delighted that people are having this experience to see the beauty of the Salt Lake Temple, the sacrifice of our pioneering forefathers and mothers and what they invested in building the house of the Lord,” said Kirby. “But also then to see how important it is for us today and for our future generations in the future.”

A foundation in faith

Kirby said some of the project’s staff had pioneering legacies and ancestors. Others are not members of the Church. But they all feel the importance of the work and the special things that happen on the site.

Kirby said his team pray for inspiration while they work on the project; They believe that God guides their every step.

Metcalf sees the effort and attention to detail in the renovation of the Salt Lake Temple as a symbol or metaphor for his very personal connection to God and Jesus Christ.

“The way we renovate our homes and lives by strengthening our beliefs through small and simple things of prayer, persistence, and service. With this in mind, I hope the guests will be inspired by the fact that, whether they are of our faith or not, you can move away from seeing this and speaking to us by saying, I want to get better. I want to have stronger faith and a stronger foundation in my life, ”he said.

Bonneville International Corporation, the company owned by KSL NewsRadio, is a subsidiary of Deseret Management Corporation, owned by The Church of Jesus Christ of Latter-day Saints.