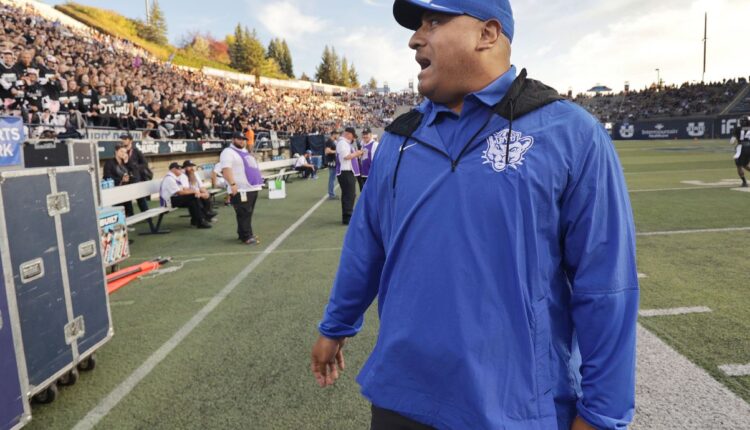 Is BYU’s Kalani Sitake a candidate to replace Jimmy Lake in Washington? He may be

PROVO – The wild coaching carousel of 2021 spun again on Sunday afternoon when Washington fired Jimmy Lake less than two years ago into the tenure of the former defensive coordinator on the shores of Lake Washington.

He becomes the youngest victim of a season that has already seen changes in high-profile jobs like those formerly Clay Helton of USC, Matt Wells of Texas Tech, Ed Orgeron of LSU, Gary Patterson of TCU, and Nick Rolovich of Washington State, to name a few.

Lake was 7-6 in two seasons in Washington, including Saturday’s 35-30 loss to Arizona state that came while Defensive Spirit was serving an unpaid suspension after being on the right arm of one of his during a side incident against Oregon Player was beaten. Lake said he tried to resolve the dispute, but the video surveillance showed otherwise.

Where do the huskies turn from here? It could be a household name on the Wasatch front, according to ESPN’s Adam Rittenberg.

Kalani Sitake’s name has been thrown out in coaching talk in the past, but this one makes a lot of sense. The former BYU defender at his alma mater aged six has spearheaded a stunning turn of the Cougars in 14th place, including a 19-3 record since the 2020 season began.

Sitake has worked exclusively in the west, mostly in the Pac-12 area, with defense coordinator posts in Utah and Oregon State. Even as a defensive-minded coach, he’s had programs known for his offense – a large portion of that credit certainly goes to coordinators Jeff Grimes and Aaron Roderick. But Sitake has taken the job.

Perhaps the most important reason the 46-year-old Sitake tops Washington sports director Jen Cohen’s list is his legacy, according to Rittenberg.

“He could also bolster recruiting, particularly with top Polynesian players, a major interest group for Washington over the years,” wrote the veteran college football reporter at ESPN. “The Huskies have never had a Polynesian head coach.”

Other candidates for the job, according to ESPN, include Chris Petersen, Matt Campbell of Iowa, Jay Norvell of Nevada, and Oregon Offensive Coordinator Joe Moorhead.

Sitake recently signed a contract extension to the 2025 season, its second extension since the turn from a 4-9 season in 2017. When sporting director Tom Holmoe announced the move to two years earlier this season, he said he was happy to To secure Sitake’s status with his alma mater “for years to come”.

The former full-back, who played on LaVell Edwards’ last team in 2000, has a deep connection and love for his alma mater, and there is no doubt that Sitake will be part of the program he inherited from former coach Bronco Mendenhall Has shown incredible loyalty and recorded a good program, making it an attractive Big 12 expansion candidate that will play in the new league in 2023.

Loyalty is the biggest question mark around Sitake.

“Would he leave his alma mater?” wrote Chris Vannini of The Athletic. “BYU is also headed for a Power 5 conference in the Big 12. But the Washington job has a higher cap without the unique challenges that come with recruiting at BYU.”

But Washington has deep pockets; The school pays the remaining $ 9 million from Lake’s contract by firing him for no reason, and has plenty of resources to convince any candidate the Huskies find attractive.

Does that include Sitake? We will see. But don’t be surprised if the first Tonga-born head coach in Football Bowl Subdivision history isn’t on many coach searches in the off-season. That is the price for success, and BYU has seen a lot of that in the past few seasons.