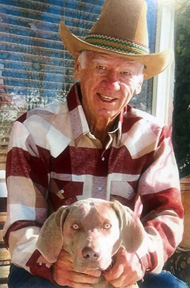 Larry was born on April 27, 1933. He was the older brother of LeRoy, Mary, Murray, and Juanita. He grew up in Provo and attended Provo High School. He was an exceptional athlete who played linebacker for the Provo Bulldogs. He and his brother Murray were … known … for their “witty” antics during this time. It became clear that he would never shy away from a fight. (There is a rumor about a referee who made a terrible phone call that resulted in the loss of a PHS soccer game. If the rumors are true, he could have been involved in the car with the referee in it being rolled over!)

It was there in Provo that he met the love of his life, Anetta Snow, with the same passion. They were paired up in eighth grade to dance with each other and he’s been madly in love with them ever since. The two married in 1949 and started a family when Denise was born in 1950. They were eventually sealed in the Salt Lake City Temple, making Utah their permanent home.

Larry began working in Carbon County’s coal mines at a very young age. Then he took a job at Geneva Steel, where he worked in the chimneys. He worked hard and long shifts to support his family. On weekends and free time he spent time on his parents’ farm and with his growing family. More children were on the way. Debbie in 1951, Brent in 1954 and Greg in 1957. Larry continued to work hard in Geneva, working his way to better and better positions. He became a foreman and was a respected leader. He was a passionate trade unionist and his children knew they should never break a line of strike. He was the union ombudsman and even spent some time on Capitol Hill fighting for the rights of steel workers. He continued his career at Geneva until he retired in 1982.

Geneva Steel wasn’t Larry’s only form of employment. He also bought the family farm in Miller Creek, Carbon County, which was 1,000 acres, and there he had his horses and raised cattle. He loved the farm. Every weekend and every day off were spent on the farm. Each of his children has memories (some good ones, some bad ones) of hauling hay, branding cattle, and hunting in the laundry. He enjoyed the cattle and loved his horses. He had many dogs on the farm including Dog, Mutt and Pup. He was a firm believer in UFOs and the ‘washing monster’ after many nights working on the farm. (Wash Monster is real. No, really. It is.) Larry also owned small businesses like AdventureLand Video and Sno Shack. He ran a Christmas tree shop where he sold trees that he had felled himself.

For years he worked at H&R Block in the tax department and at times even worked as a broker. Larry had an incredible work ethic that he taught each of his children.

Larry continued to exercise into adulthood. When he started a sport or a hobby it was obsessive. Fishing, golfing, fast and slow pitch softball and bowling to name a few. When he played it, he had everything he needed, bought all the books, and worked tirelessly on the nuances and understanding of the sport. Have you ever read a book about how to write games for basketball, how to shoot properly, a bowling shape, or the physics of the fast field of play? He has! Unfortunately his children too! However, golf became a special passion. He taught his entire family to golf and even organized family reunions around a Johnson Family golf tournament. Larry wanted to play on every public golf course in the state of Utah. He always had golf clubs in his case, just in case. He loved watching BYU play soccer and basketball (as well as every other team that played every type of game that was happening anywhere in the neighborhood). He cheered the outsider. He was competitive, spirited, and a bit rowdy at times. It wasn’t uncommon for my mom to cover her face and say, “Oh Larry!” Whenever he had one of those “enthusiastic discussions” with the referee or a competitor. He had a particular fondness for harassing the referee. This has led to legendary tales of being kicked out of many games!

In addition to sports, Larry always had a hobby. He collected old coins, stones and postage stamps from all over the world. He loved guns and even loaded his own shotgun shells. Many of his children and grandchildren liked to do this with him in the green room downstairs. He loved playing cards, hunting with his dogs, solving puzzles, solving Sudoku, doing math and mastering word games. He loved to involve his children and teach them all of his interests.

While devoting himself to his career and hobbies, his family and children were always in the foreground. Fortunately for him there were more on the way. Wendy entered the scene in 1965 and Kristy surprised them all in 1971. The family was complete, six in all. Larry was so proud of his children. He told his children stories about their siblings, their mother and their extended family. His world was family. He loved his family. He worked to stay close to his parents, siblings, cousins, nieces, and nephews. As he grew up, he often took his children with him and visited and did gardening for the extended family. There are stories of winter drivers who risked their lives every evening and every weekend when they drove “up the canyon” to take care of Grandma Delma. He worked hard to take care of everyone. He always showed up.

Larry’s first family home was in Orem on 8th East, where the family lived for several years. Then he moved a block or so to his permanent home at 1000 East in Orem. Many beautiful childhood memories were made there. Countless hours were spent playing ball games – children and grandchildren. He loved camping in his Aljo trailer with his family and spent many spring holidays in the Goblin Valley. For many summers he moved all of his children to California to see the ocean and go to Disneyland. No more children without a souvenir. He loved spending all of his time and money on his family. He always said, “I have money that I haven’t even spent.”

Later in life, Larry and Anetta served two LDS missions together. They worked in the churchyard and the canning factory, as well as at DI. They were active in their community and very popular in their neighborhood. My dad loved sitting outside on the porch and watching the busy neighborhood. With his handy pocket knife he dug up weeds in the front yard – and chatted with everyone who passed by.

Anetta suffered from heart failure in 2005. During that time, Larry was an incredible caregiver. For months he sat vigilant by her bed in the hospital and in rehab. When she needed an LVAD to keep going, he carefully looked after her. He learned sterile techniques so he could change her bandages, changed the house to make it easier for her, and changed her batteries every few hours. When the time came, he held her and looked at her lovingly and told her how much he loved her. Still at the end of his life, suffering from dementia, he called Wendy to his bedside to make sure that she should take care of Anetta. “And don’t just care about them. I’m talking about the HIGHEST PRIORITY. “

Larry moved in with Wendy and Alan in 2015. Since then, he has taken good care of her and her family. He continued to attend every possible game, life event, and family gathering. He mowed the lawn, looked after the grandchildren, and fed the dog and birds. He created an incredible family with 6 children, 27 grandchildren, 66 great-grandchildren and 4 great-great-grandchildren. He lived five generations! He made a legacy, he lived a good life, and he truly is a hero.

Larry died on November 7th at 11:47 pm. He was surrounded by his family. They held, hugged and kissed, encouraged and comforted him – gave him the love he always gave to his family. He meant a lot to many people and is very much missed.