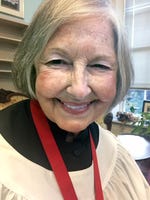 Margaret Ogden Hardy of Savannah, Georgia, passed away on May 9, 2022, at the age of 74 after a long battle with cancer.

Margaret was born on July 12, 1947, in Wilmington, Delaware to John Van Etten Hardy and Margaret Stubblefield Hardy. Margaret attended elementary schools in Delaware, Texas, West Virginia, and Japan, as her father traveled with his work for DuPont in the 1950s and 1960s.

Margaret graduated from AI DuPont High School in 1967 and went on to graduate from Stetson University in Deland, Florida in 1971 with a BA degree in Music. She then received her Master of Education in Counselor Education in 1972 and a degree as an Education Specialist in 1973, both from Georgia Southern University.

Margaret worked as an Elementary School Guidance Counselor for the Savannah Chatham County Public Schools until her retirement. She prided herself in the schools she worked for, including Anderson, May Howard, Butler, Hesse and Garrison Elementary.

After retirement from the Savannah Public Schools, she began to work for schools within the Catholic Diocese of Savannah in St. Michael’s on Tybee Island and at St. Peter’s on Wilmington Island.

Father Patrick O’Brien remembered Margaret as being kind, compassionate and understanding of her students.

In addition to Margaret’s long career, she devoted herself to her beloved churches and their missions.

Margaret was an active member of First Baptist Church since 1982. She served as a Diaconate of the church and was an Endowment Trustee. Her love and talent of singing and music were greatly appreciated at church. She served as Chair of the Music Committee and as a member of the Adult Choir and in the Handbell Choir, as well, she was a member of the Stewardship Development Committee, the Missions and Social Ministries Committee, the Altar Guild, the Denominational Relations Committee , the Classics, and the Peggy Murphy Sunday School Class. She helped with the music for Vacation Bible school, and she had a large interest in helping to maintain the church’s historic building and the organ at the church.

Margaret was also passionate about First Baptist missions to Cuba. She participated in over 20 missionary trips to Cuba before her health prohibited her from traveling.

Margaret also spent many years actively involved and dedicated to St. John’s Church of Savannah. She traveled to England with the church choir of St John’s.

She sang as a member of the choir as well as sang as a soloist. She often sang Evensong and truly always “sang for the Glory of God.”

She volunteered at the Green-Meldrim House, giving tours, and enjoying the wonderful history of the building.

Margaret was always philanthropic and happy to help any friend or organization in need. One of her proudest accomplishments philanthropically was when she secured that the organ pipes from the historic Bruton Parish Church of Williamsburg, VA were to be sent to St. John’s for use in the future.

In addition to singing in her church choirs, Margaret also sang with the Savannah Symphony Chorale for several years. She was truly a gifted and talented vocal musician with a beautiful voice.

Margaret also experienced much joy from her vast travels around the world. As a child, her family moved to Japan in 1960 where she spent 2 years in school there and traveling through Japan with her family. This experience shaped Margaret’s love for the Far East and her love of travel. Her family trip to Japan concluded with a trip around the world to Hong Kong, India, The Middle East, Greece, Germany, Ireland, Hawaii, and finally home to Delaware. She traveled to the Taj Mahal, the original King Tut exhibit, and a trip down the Nile. During this time, she developed a passion for photography and captured many memories in her beautiful photos.

As an adult, Margaret traveled back to Japan, China, Hong Kong, Thailand, Mongolia, Myanmar (Burma) and to much of the world where women often did not travel. She went to Russia at the height of the Cold War. She loved learning the history and shopping during all her travels.

Margaret was also particularly proud of Savannah’s participation in the Centennial Olympics in 1996. She volunteered in the Yachting events throughout the summer of 1996 in Savannah. She was also very proud of her cars and had a keen interest in her cherished automobiles.

Margaret had a love of animals, especially her beloved cat, Kumo, and many others that followed. Margaret is survived by the many special friends who were dedicated to her as her health declined.

She is also survived by her brothers, William H. Hardy III (Judith) of Colorado and John VE Hardy, Jr. (Elizabeth) of West Virginia and Utah, as well as her 3 nephews, John Hardy III, McEwen Hardy, and Dr . William H. Hardy IV. She is predeceased in death by her sister, Frances Hardy, her mother, Margaret S. Hardy and her father, John VE Hardy who recently passed away in 2021 at the age of 105.

A Celebration of Life will be on Wednesday, June 15th at 2:00 pm at St. John’s Church in Savannah, GA.

Salt Lake kindergarten teacher calls it a career after 51 years