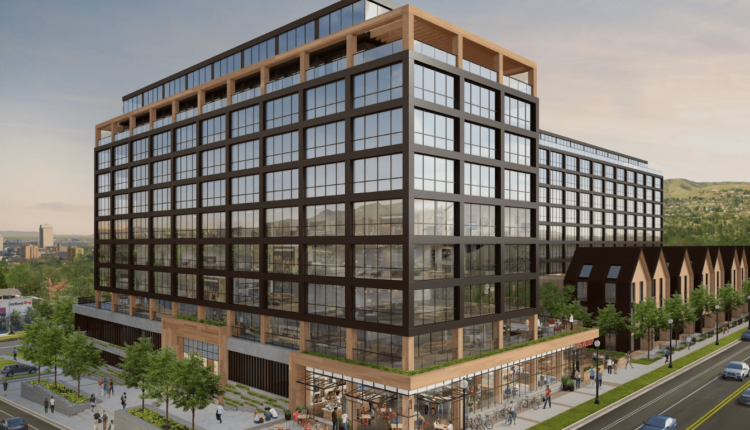 In a city that is increasingly characterized by concrete landings and timber frame buildings, a new construction technology is coming into the city that can help to change the landscape.

Solid wood is cheaper and less harmful to the environment than concrete and steel. Carbon dioxide emissions from the construction industry account for around 40 percent of global CO2 emissions.

Solid wood has been built to 18 stories in other countries, but its greatest potential in Utah appears to be in the 6 to 12 story range – given the city’s legal height restrictions and the expensive high-rise building codes that start with the top floor of a structure in Force occurs at 75 ft or higher.

Whether developers, architects and construction professionals use the new technology is mainly a question of costs and the regulatory environment. Two projects want to test the water in Salt Lake City. One is imminent, the other is in the preliminary phase.

Solid wood posts, beams and panels are pressed at the factory and glued with thin layers of trees. They are strong enough to be built over 18 stories and perform well during seismic events. If they are mass produced, their cost is likely to be significantly lower than that of concrete and steel.

The construction time is also faster. The start-up costs are lower because there is no podium for structured parking.

Cross-laminated timber (CLT) is the best-known solid wood product. The latest structure from Giv Development’s Project Open will use a product called a Mass Plywood Product or MPP.

The location is on the northwest corner of University Street (1350 E) and 300 South. It is currently zoned RMF-30 and R-2. A zoning change to the core of the TSA station area would be required to build to 125 feet.

It is also located in the historic district of the university, which largely prevents “contributing structures” from being demolished.

There are currently no zones for transit stations around the Stadium Trax station.

Harbor Bay officials point to their current under construction project in Cleveland as a role model for Salt Lake.

“Intro CLE” is a nine-story solid wood building with 298 units and a volume of 144 million US dollars. It is abundantly mixed-use, with 35,000 sf retail, 12,000 sf event space and one acre of public green space.

Intro SLC would be an investment close to $ 125 million and would be built to LEED Gold standards.

Steve Willobee, a Harbor Bay representative, announced that six lots north of the old West Institute building are under contract pending approval from the city. At this point it is desirable to include the building of the West Institute in the development, which belongs to the university and is used by the Institute for Theater.

Chris Parker of Giv Development will keep his designs for the latest project Project Open under lock and key until “later in May”. This is what we know.

Project Open 3 location, viewed from the north at 400 North and 500 West. Photo by Luke Garrott.

At 529 W 400 North on 0.31 acres, Project Open Phase 3 will include seven stories of solid wood. Located in the TSA-UC-T Transit Station Area-Urban Core-Transition zone, it allows a height of 60 feet (plus one floor).

Parker notes that the building’s footprint is significantly smaller than the lot size and offers “27 units on a fairly normal lot for a single family home.” This enables a “real density without a pedestal structure” which Giv hopes will be the “most environmentally friendly installation and operation” in the region.

Rather than being underground or on the podium, Open 3’s parking lots will likely have surface solar panels to offset the building’s energy consumption. A similar system is used at Artspace Solar Gardens, Parker said.