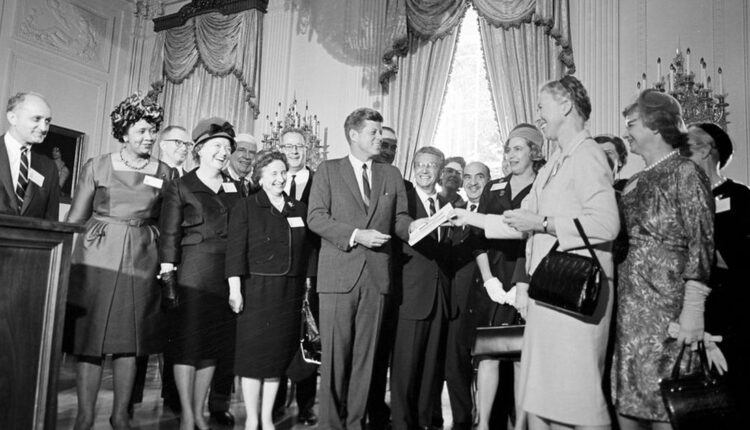 Meet the Utah woman who fought for truth in advertising and was the highest-ranking woman in John F. Kennedy’s administration

Editor’s Note: This article is part of a series examining the status of women in Utah. Read the editorial explaining the project and review facts on topics that typically lead the state to be ranked as the worst place in the country for women. Take the quiz to see if a statement was made about Utah women in 1964 or 2019.

Look around your kitchen and you will see the legacy of Esther Eggertsen Peterson, a Utah woman who served in national roles under three US presidents.

See the label on your cereal box with the ingredients and nutritional information? Or the “sell by date” for that gallon of milk in your fridge? Peterson was instrumental in creating it.

She was also a driving force behind the passage of the Equal Pay Act of 1963; fought in advertising for the truth; served as the highest ranking woman in the administration of President John F. Kennedy; and was awarded the Presidential Medal of Freedom “for their work in helping consumers make better purchasing decisions,” according to Better Days 2020, a nonprofit advancing the history of women in Utah.

“Esther Peterson has influenced our lives more than any other living woman,” Claudia Harris, associate professor at Brigham Young University, told The Salt Lake Tribune in 1995.

Born in Provo in 1906, Peterson graduated from Brigham Young University and taught in Cedar City for several years. When her father died, “it was Danish custom for the youngest daughter to stay at home and look after her parents,” says the 1995 Tribune article. “How many times in later years did Esther break with tradition.”

“It was a way out,” Peterson told The Tribune. “After my father died, my mother was very dependent on me. I had to go. Also, I was stuck with a young man and not sure I wanted to commit. He was serving a LDS mission and wanted me to wait. I applied to graduate school and moved to New York. “

It was there that Peterson met her husband, Oliver Peterson. She “was a conservative Mormon Republican from Utah,” while he was “a socialist who drank coffee and smoked a pipe,” according to a biography of the nonprofit Better Days 2020. The fact that Esther married him “speaks a lot” about her willingness to listen and learn from people who have had different experiences than her, said Naomi Watkins, who wrote the piece.

After moving to Boston, Peterson volunteered for a chapter at the YWCA. One night, many of her students were absent from class “because of an impending labor strike,” Watkins wrote.

Peterson learned that a 16-year-old high school student worked at a table in her home with her mother and younger siblings, making $ 1.32 for every dozen dresses made. The company they worked for recently “changed the pocket design of their dresses from a square to a heart shape,” according to Watkins research, making it a more time-consuming task and thereby lowering their wages.

The next day, Peterson joined the textile workers on the picket line in the Heartbreakers Strike.

“It completely changes the way they live and is really becoming the foundation of their work,” said Watkins.

After moving to Washington DC in the 1940s, Peterson became a lobbyist for the National Labor Relations Board, the Amalgamated Clothing Workers Unions, and later for the AFL-CIO.

“At her first lobbyists meeting, all the men stood up when she walked in,” Watkins wrote. “Peterson didn’t want to be treated any differently and said, ‘Please don’t stand up for me. I have no intention of standing up for you. ‘”

“She’s pretty straight forward, but she also seems to have a pretty good sense of humor,” said Watkins.

President John F. Kennedy appointed Peterson Assistant Secretary of Labor and Director of the United States Women’s Bureau in his administration, and at Peterson’s suggestion, Kennedy established the President’s Commission on the Status of Women in 1961.

Led by Peterson and Eleanor Roosevelt, the commission examined “Discrimination against women and ways to eliminate it,” as well as “Laws and services that would help women more easily fulfill their roles as housewives, workers or citizens,” according to the John F. Kennedy Presidential Library and Museum.

Several states followed suit and set up their own commissions to examine the status of women. Utah’s group began in 1964 and continued under various names over the decades that followed. (The Tribune used a report from this commission to create this quiz.)

Reading through a 1963 report by Peterson’s team, Watkins said she was surprised “how timely” the issues they investigated “still” are, such as childcare, equal pay, and female political representation.

Peterson experienced some of these hurdles herself as a mother of four. At one point she discovered that “the cost of childcare exceeded her paid wages,” wrote Watkins, leading her to “fight for, and work on, laws to strengthen the Fair Labor Standards Act that set minimum wages and working hours , Regulate overtime pay and child labor. “

During Lyndon B. Johnson’s presidency, Peterson was a special assistant on consumer affairs, according to Watkins, and she worked similarly for the administration of Jimmy Carter.

Peterson believed that “businesses need to be honest about what they present to their customers,” said Watkins, so that “consumers can make informed decisions.” In a 1964 Tribune article, Peterson described the piles of letters she received from people across the country complaining about fraudulent packaging.

“One Texan suggested that she get a pint of ice cream and melt it to find out how much air there was in it,” reported The Tribune.

“Sometimes I ask a butcher to unpack a pack of meat to see if there is too much bone under it,” Peterson told the newspaper in another 1964 article.

She added, “I would like to see more women who report, ring the butcher’s doorbell.”

Among her later successes, Peterson served as vice president of consumer affairs for Giant Food Corporation and was president of the National Consumers League. In 1993 she was inducted into the National Women’s Hall of Fame.

Regarding her career, an 88-year-old Peterson told The Tribune that while she has lived outside of Utah for most of her life, “her heart is in the West.” A painting of Mount Timpanogo hung in Peterson’s DC living room, the article said.

Peterson died in 1997 at the age of 91, leaving “a remarkable legacy that touches every American who works, borrows and groceries for a living,” according to The Tribune.

Becky Jacobs is a member of the Report for America Corps and writes for the Salt Lake Tribune on the status of women in Utah. Your donation, which equals our RFA grant, will help her write stories like this one; Please consider giving any tax deductible gift today by clicking here.