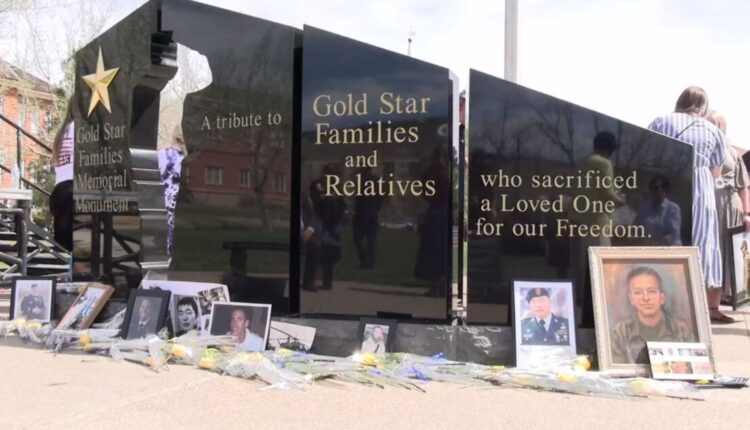 The new monument has been in the works for at least a year and a half. It’s part of a national chain of memorials across the country with the Woody Williams Foundation.

“When men and women decide to follow the flag forever and leave their symbolic plow and family farm, they do it knowing they could lose their life,” Green said. “Our job is never to be forgotten.”

The hundred or so that gathered in St. George attended to honor the fallen, but Green also hoped they would pay tribute to those still paying the ultimate sacrifice.

The families working so hard to bring this monument to the Utah community are the ones with the deepest perspective when it comes to honoring the fallen.

Gold Star Families said the names of their loved ones, then laid a yellow rose next to a framed picture resting against the monument.

“We lost our son to his battle to depression on January 14, 2020,” said Moxon. “There never goes a day that I don’t mourn my son, and at the same time there isn’t a day that I don’t laugh at his highly inappropriate funny remarks that come to mind.”

The new Gold Star Memorial in St George is now a place for Moxon and her family to pay their respects.

“This is a place I can come and share my joys with him and my accomplishments,” said Moxon.

For James Hammon, it’s another memorial to remember the ultimate meaning of sacrifice — something he learned when his son Chief Petty Officer Jared Reaves passed away from Leukemia while serving with the United States Coast Guard.

“I had a lot of support when my son died, and I wanted to come down here and do the same for these families,” said Hammon.

The Gold Star Father drove from North Ogden because it was just that important to him to be together with other families.

“The strength of the community is really what holds people together,” said Hammon.

The St. George monument is the second of its kind in the Beehive State. The first Gold Star Families Memorial Monument was built in North Ogden.

There are plans for a third Gold Star memorial in Sandy City.