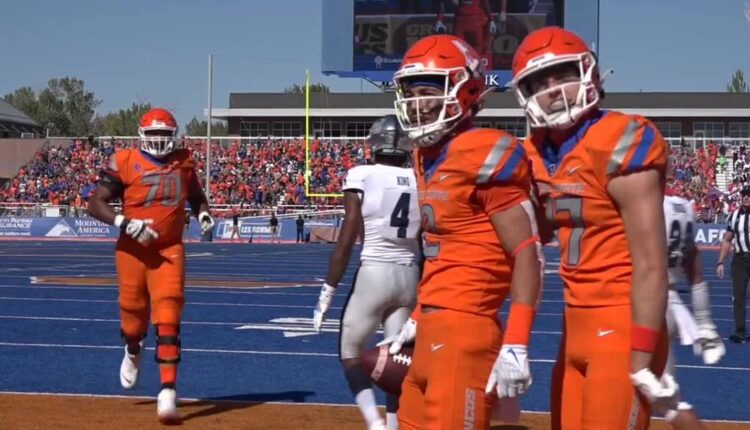 BOISE, Idaho – Bronco Nation was thrilled for a rare home game when fans took advantage of the perfect weather to support the Broncos.

But the second half did not go well for Boise State from the first snap of the third quarter, Hank Bachmeier was fired and fumbled.

Nevada would capitalize on the sales by hitting a 12 yard touchdown run and taking the lead 28:21, Nevada would never look back and they beat the Broncos 41-31 at Albertsons Stadium.

Boise State is now 2-3 and the loss drops to 1-1 at Mountain West, next Saturday Boise State will travel to Provo to play the 13th BYU Cougars.

The day started with a lot of energy as the fans soaked up the sun to prepare for the big matchup.

“It’s so great to be able to play in prime time and we really love being out here early in the morning and enjoying the beautiful sunshine,” said Boise State fan Craig Osborne. “By the way, we’ve ever had better weather for all the home games we’ve had this year, go Broncos.”

The Broncos would give fans several reasons to cheer in the first half as Bachmeier threw three touchdowns and Khalil Shakir made an incredible one-handed grip in the end zone over two defenders.

But the Broncos also struggled to stop Carson Strong and the Nevada Wolfpack. As sales piled up in the second half of Boise State, the Wolfpack took advantage of it with a 14-point lead.

Hank Bachmeier went 34-48 for 388 yards with four touchdowns and an interception, but the Broncos struggled to protect Bachmeier and a couple of bad snaps hurt the Broncos, they flipped it three times and didn’t force turnover.

Tomorrow we will have reactions from coach Avalos and some of the players and the Broncos are in an unusual position with a record loss of five games this season.