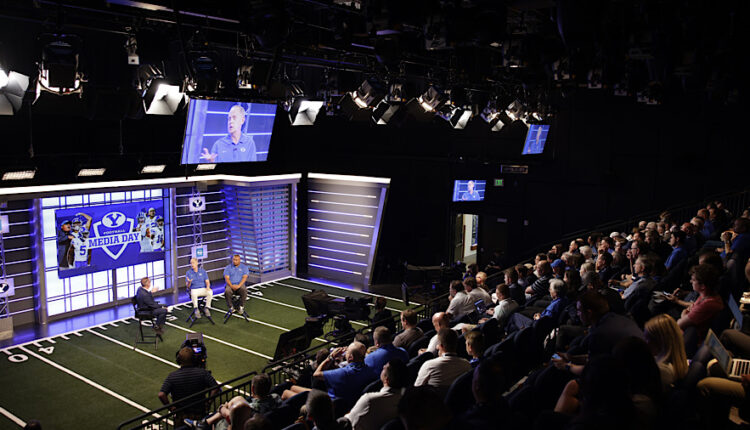 PROVO, Utah – The BYU football program wrapped up their final media day of the independent era at the BYU broadcasting building.

The Big 12, transfer portal, recruiting, and NIL were hot topics as the Cougars prepare for fall camp.

Here are some of my observations from a historic day in Provo.

1. NIL and the transfer portal

BYU athletic director Tom Holmoe didn’t mince words when discussing NIL and the transfer portal in the “State of the Program” interview to kick off media day.

He was critical of the lack of rules surrounding both aspects of college athletics.

“The concept of the portal I like,” said Tom Holmoe.

“Again, there are rules that need to be put in place. There are too many rules being broken right now and it’s a free for all, in the portal.”

Strong words from the #BYU AD on NIL and the Portal. #BYUMediaDay @kslsports

Head Coach Kalani Sitake has built a program around what’s best for the individual, which is why NIL was embraced from the outset by BYU.

Things have quickly evolved with NIL, and the transfer portal, which makes college athletics more professional, and less amateur then it’s ever been.

There needs to be clear guidelines as to what is acceptable in both of those realms.

The current state of both NIL and the transfer portal is akin to the wild west.

I believe NIL is a good thing, but I agree with Holmoe.

There is a comfort level with the current state of the program, and the players on the team heading into 2022.

It’s a remarkable statistical considering what BYU has to juggle with players coming and going on missions for the Church of Jesus Christ of Latter Day Saints.

Couple that with a returning quarterback in Jaren Hall who had a “great” debut season in the words of his offensive coordinator and you have a team with expectations to end the independent era on a high note.

That kind of returning production only comes around every so often, which is why the coaching staff feels pressure to maximize the opportunity.

Another 10 win season could lead to many players bolting for the NFL. That’s a good problem to have.

This coaching staff has proven they can win games with teams lacking experience.

Now, can they continue to win when expectations are high? That’s a challenge this staff is ready to embrace heading into the opener against South Florida.

I’m not sure it was planned, but Holmoe revealed the Big 12’s plan for number of conference of games.

When BYU joins the conference in 2023, the Big 12 will move to a nine game conference schedule.

Sure, it will make scheduling non-conference games easier, but I think it will make Big 12 appearances in the college football playoff few and far between.

Take the Pac-12 for example. They’ve only been represented in the CFP twice in eight years.

Notre Dame has appeared in the CFP as much as the Pac-12.

An extra conference game provides another opportunity for teams to get upset in conference.

Perhaps this is a short-term solution until Texas and Oklahoma leaves for the SEC.

Nobody knows for sure, but in the Cougars inaugural season, the Big 12 will play more conference games than ever before.

You can hear Matt Baiamonte every Saturday on KSL Newsradio for Cougar Sports Saturday from 12:00 pm – 3:00 pm or you can find him on Twitter here.