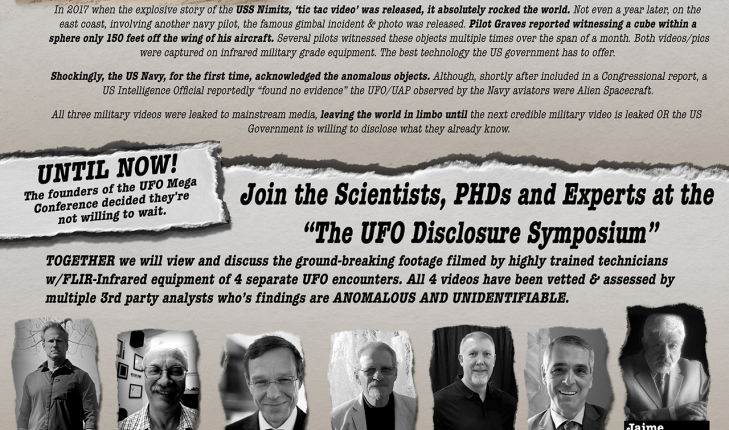 Off the heels of the Pentagon document release, The UFO Disclosure Symposium is hosting a historical event this May

From the 27th-29th of May, multiple authentic UFO sightings will be revealed at the event and reputable figures will have a discussion with the media.

UFO Mega-Conference has set this up so we can TOGETHER view and discuss the ground-breaking footage filmed by highly trained technicians w/FLIR-Infrared equipment of 4 separate UFO/UAP encounters.”

VERNAL, UTAH, UNITED STATES, April 14, 2022 /EINPresswire.com/ — There has been much talk of UFOs and UAP in the news as of late. More importantly, it appears that more and more undeniable proof is coming to the table as even government agencies are finally confirming knowledge of such things. There is still a long way to go for true disclosure, however. UFO Mega-Conference has been producing and hosting UFO conventions attracting the top names in research and disclosure for years.

The UFO Disclosure Symposium announced a historical event to be held on May 27th-29th, 2022, in the city of Vernal Utah for Live Attendees and LiveStream for the world. UFO/UAP footage like this has NEVER been released to the world and the media at the same time. Unlike any other event, the actual analysts, footage holders, and industry experts discuss it openly in front of a press conference of media, live attendees, and LiveStream attendees around the world. The footage has been vetted by multiple third-party analysts and is being presented to live attendees as well as to the Livestream audience while a press conference is taking place to give both the media and the event attendees access to all the information at the same time . This is History in the making.

“I love that this event wants to bring it to the people at the same time as the media, in fact the event is set up for LiveStreaming so that anyone from anywhere in the world can join the entire event for a really low cost to be a part of this historical event” says, David Schooley, one of the conference producers and organizers, “UFO Mega-Conference has set this up so we can TOGETHER view and discuss the ground-breaking footage filmed by highly trained technicians w/FLIR- Infrared equipment of 4 separate UFO/UAP encounters. All 4 videos have been vetted & assessed by multiple 3rd party analysts whose preliminary findings are anomalous and unidentifiable. You don’t want to miss this. They are even making it very affordable as they are doing this for the right reason to get the truth and factual, science-based information out there. Tickets can be purchased for the event and live stream at UFODisclosure Symposium.com”

In the interest of seeking the truth directly from experts & scientists, the Founders UFO Mega-Conference, pulled together a team to create this into an event at minimum cost to anyone who wants to be there or get the Livestream to be a part of this historic event. Bob Brown, one of the two founders of UFO Mega-Conference, said, “This could not come at a more pertinent time. The truth about UFOs, UAPs, and these types of experiences are coming out all around us. Just this past week the pentagon released over 1500 shocking UFO documents proving that many organizations have proof of such things and it’s about time an event like this can give their incites and share proven science and facts around this topic.”

With disclosures of events happening around us like in 2017, when the explosive story of the USS Nimitz, ‘tic tac video’ was released, it absolutely rocked the world. Not even a year later, on the east coast, involving another navy pilot, the famous gimbal incident & photo was released. Pilot Graves reported witnessing a cube within a sphere only 150 feet off the wing of his aircraft. Several pilots witnessed these objects multiple times over the span of a month. Both videos/pics were captured on infrared military-grade equipment. The best technology the US government has to offer.

Shockingly, the US Navy, for the first time, acknowledged the anomalous objects. Although, shortly after included in a Congressional report, a US Intelligence Official reportedly “found no evidence” the UFO/UAP observed by the Navy aviators were Alien Spacecraft. All three military videos were leaked to mainstream media, leaving the world in limbo until the next credible military video is leaked OR the US Government is willing to disclose what they already know.

About the UFO Disclosure Symposium –
The UFO Disclosure Symposium was formed by the UFO Mega-Conference as an answer to getting information out ‘to the people, by the people’. The organization was presented with footage holders of very compelling evidence of UFO/UAP to bring to their reach and relationships of Industry Experts, Image Analysts, Scientists, and UFOlogists that could do their own third party verification. They decided to put this event together as a response to having access to all of these things at a time when the people need to hear expert suggests, proven science and facts around this topic.

UFO Mega is a not-for-profit Immersion Event Coordinator of Scientists, Researchers, and Experiencers led by Bob Brown, a Co-Founder of UFO Mega-Conference. Bob has been producing UFO-related conferences and events for over 35 years, attracting the top names in research and disclosure.


A Presswire’s priority is source transparency. We do not allow opaque clients, and our editors try to be careful about weeding out false and misleading content. As a user, if you see something we have missed, please do bring it to our attention. Your help is welcome. A Presswire, Everyone’s Internet News Presswire™, tries to define some of the boundaries that are reasonable in today’s world. Please see our Editorial Guidelines for more information.

These 25 College Towns Have the Best Social Life