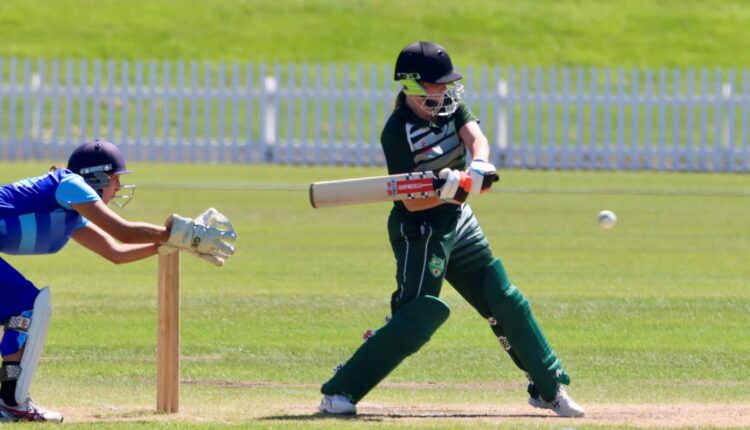 Jessica Ogden scored 90 in Manawatū’s win over Hawke’s Bay at Napier at the weekend. (File photo).

Jessica Ogden starred with the bat as the Manawatū women’s rep cricket team beat Hawke’s Bay by two runs to maintain their unbeaten record in the Shrimpton Trophy.

Manawatū have won all six games in the 40-over competition and with two rounds remaining are in a good position to claim the title.

The win over Hawke’s Bay was their closest game of the season. They were without their five Central Hinds players, Jasmine Odell through injury and others through unavailability.

Seam bowler Ogden, who has spent time with the Hinds this season, top scored with a run-a-ball 90 for Manawatū as they scored 211-9, then they restricted Hawke’s Bay’s to 209-5 in a tight finish.

Ogden came together with in-form captain Sam Mackinder​ to rescue Manawatū from 4-4 early in the innings and they put on a partnership of 184 for the fifth wicket.

Mackinder was out for 79 from 113 balls, hitting two sixes and six fours, and Ogden was out shortly afterwards with the score at 191-6.

Manawatu lost a few more wickets and Bridie Mcfadzean was the only other batswoman to score in double figures with 10 not out.

In Hawke’s Bay’s chase, they needed 30 runs off the last five overs and eight off the last two, but Mcfadzean and Ogden defended the total and kept Hawke’s Bay to 209-5.

Spinner Sally Wenham bowled Manawatū back into the game and was the pick of their bowlers with her 2-27.

Manawatu next play Taranaki in New Plymouth this weekend.

♦ The Manawatū men’s A side lost to Hawke’s Bay by 193 runs in Napier.

Manawatū were then bowled out for 180 in 24.2 overs with Angus Lyver’s 56 the best offering.

♦ Meanwhile, Marist and United will square off in this weekend’s one-day club final after winning their respective semifinals.

He shared in a 135-run partnership with Mitch Renwick, who scored 58.

A half century from Ma’ara Ave got United home against Boys’ High.

Earlier Boys’ High player coach Scott Davidson had top scored with 63 not out.

The women’s competition resumes this weekend.

Abortion Debate Ramps Up in States as Congress Deadlocks

Inflation increasing need for food assistance in Utah ahead of holidays