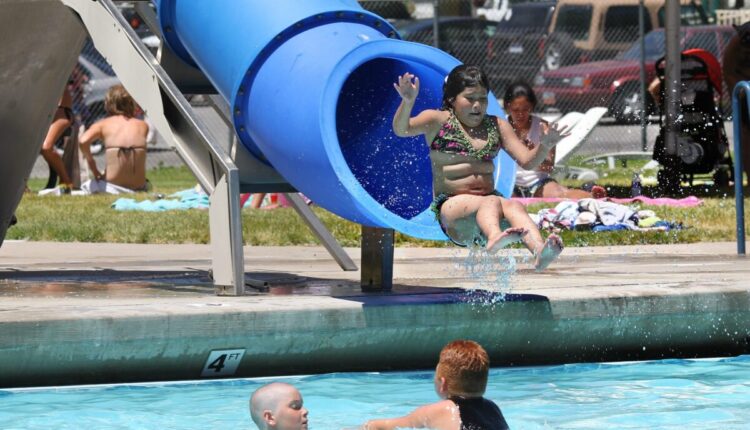 Lorin Farr Pool in Ogden is pictured in this photo from 2012.

Lorin Farr Pool, photographed July 3, 2022, as it was in the process of being repainted. The pool’s opening was delayed because the surface needed to be repainted.

Lorin Farr Pool in Ogden is pictured in this photo from 2012.

OGDEN — Time, finally, for some pool fun here in Ogden.

Lorin Farr Pool is open after a long delay brought on by difficulty in securing the paint needed to surface the pool.

“They were actually full the very first day before we put it out. Demand’s there,” said Mark Johnson, chief administrative officer for the city of Ogden.

The city-owned pool typically opens around late May or early June, coinciding with the end of the school year. But it had remained shuttered through July because the pool surface needed to be repainted with a special non-slick paint that proved difficult to secure given supply-chain problems.

According to a post on the Lorin Farr Facebook page, the pool opened at least as of Aug. 2. It will be open every day until Aug. 18 from noon to 6 pm Monday through Saturday and 1-6 pm on Sundays. Ogden schools reopen on Aug 19 and after that, the pool will be open every weekend until Labor Day, Sept 5.

Dennis Montgomery, Special to the Standard-Examiner

Lorin Farr Pool, photographed July 3, 2022, as it was in the process of being repainted. The pool’s opening was delayed because the surface needed to be repainted.

Johnson suspects word-of-mouth caused the pool to fill quickly after it reopened. “People were driving by and seeing it was open,” he said.

The pool surface had initially been repainted with a paint that proved to be too slippery, posing a potential safety hazard, according to Johnson. That led to the drawn-out process to get new paint.

High temperatures in Ogden are expected to be in the low- to mid-90s through Wednesday and high 80s on Thursday and Friday, according to the National Weather Service.