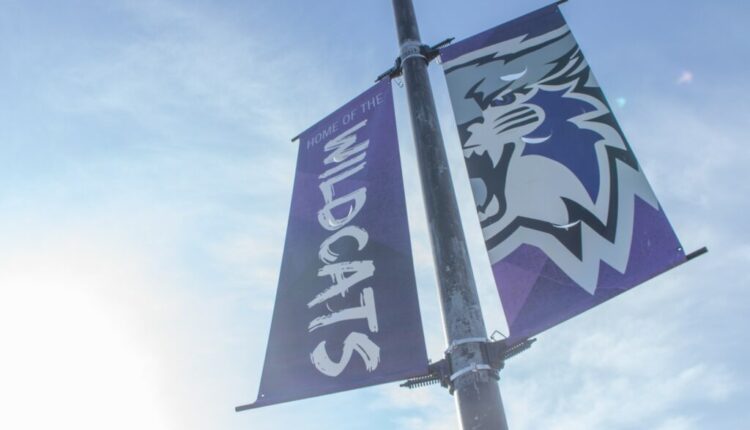 Because Weber State University’s campus is elevated compared to much of Ogden City, Ogden doesn’t have the same connection or college city feel as other Utah cities like Logan and Provo.

One of Weber State University’s many wildcat banners glows in the morning sun. (Kennedy Robins / The Guide)

Make Ogden Purple is a movement inspired to intertwine the community and culture of the city and the university. Amir Jackson, a member of the Weber State Alumni Association’s board of directors, was a pioneer in leading this role. He said the split between the two was a major reason the move was important.

Jackson noted that school events were usually held on campus rather than in the community. He also browsed social media and saw his local feed flooded with memes and content about universities in Salt Lake City and Provo, but not Ogden.

The “Let’s Celebrate Weber State” banner is intended to spread the spirit of the school and get the students excited about the school. (Kennedy Robins / The Guide)

What really rubbed Jackson in the wrong direction was when the Wildcat soccer team battled James Madison during the 2017 FCS playoffs, but discussion about it was nowhere to be found, and local bars and restaurants also failed to show the game.

“For me, it was a serious problem that we had a national team and no one was talking about it,” Jackson told Weber State Weekly, a podcast and blog devoted to fans of Wildcat content.

Frustrated, he decided to bring out a graphic with the phrase “Make Ogden Purple”. Four years later, his vision becomes a reality.

Many large wildcat banners can be seen along Harrison Boulevard, designed to spread the school spirit of Weber State University. (Kennedy Robins / The Guide)

On October 5th, Ogden City Council and Mayor Michael P. Caldwell adopted and announced the initiative by Jackson and the WSU Alumni Board to officially launch “Make Ogden Purple Week” from October 11th to 16th, 2021, coinciding with the Return of the WSU week.

The week will include attending the university’s Homecoming Week events, but should also include more. The initiative encourages Ogden businesses and residents to find their own ways to go purple and show their pride and support for the WSU, such as purple lights and signs on their windows during the week. WSU banners, flyers and artwork will also be found along sidewalks and utility poles in downtown Ogden.

“Everyone is invited to find creative ways to ‘spice up’ Ogden in purple,” said Jackson. “We want this to be an authentic sign of support.”

The initiative was also supposed to include a Purple Paw Parade on October 9th in the city center, but the night before an announcement was broadcast on the Traditions Keeper app that the event was canceled due to poor weather conditions.

“Make Ogden Purple” is intended to serve as a visual reminder of the importance of the collaboration between Ogden City and WSU.

The “Let’s Celebrate Weber State” banner appears upon entering the main Weber State University campus along with directions to the areas on campus. (Kennedy Robins / The Guide)

Jackson said Ogden people have a connection to the mountains, just as Ogden people should feel connected to the WSU.

“We have to come together as a community, and what could be nicer than showing our purple pride for the university that unites us all?” Said Jackson.