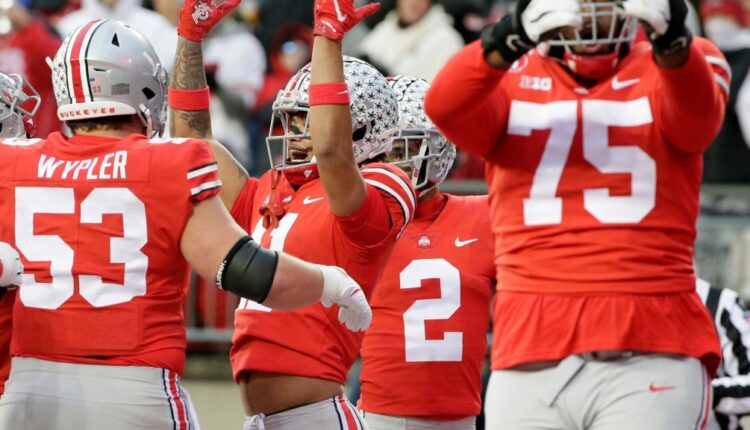 Predicting the fourth release of the College Football Playoff Rankings

And, here we go again. The fourth installment of the College Football Playoff Rankings will be announced on Tuesday night, and there will be some changes at the top once again, especially with Oregon’s loss at Utah.

We still expect the usual contenders we’ve seen this season like Georgia, Alabama, and Ohio State near the top, but how will things line up behind that. The Ducks’ loss has opened the door somewhat for teams like Cincinnati, Michigan, and Notre Dame, but there’s still a couple of weeks to go with the conference championship games still out there.

As always here on Buckeyes Wire, we don’t wait for the CFP Committee to use whatever group-think that permeates the rankings on Tuesday, but rather, we try to peer into their thinking based on what we’ve seen before to predict what the CFP Rankings will be early in the week.

Here is what we believe you’ll see (or close to it) with the fourth release of the College Football Playoff Rankings.

The Bulldogs found themselves back in the rankings after the Auburn win a week ago, and there’s no reason to move them too far after a beatdown to Tennessee State. There won’t be much movement either way.

Houston has very quietly won ten in a row after dropping the first contest of the year to Texas Tech. There’s a lack of a real statement win in there, but it’s hard to rattle off that many victories in a row. The Cougars won’t move up much, but they won’t go anywhere downward either.

UTSA has never had the respect of the committee, but the Roadrunners are just one of the three remaining undefeated teams in FBS, so that’s got to count for something. A miracle finish to beat UAB won’t impress anyone, but UTSA has still done enough to be in the latter part of the rankings.

I have a very good feeling about Clemson being welcomed back into the rankings after beating a highly ranked Wake Forest team on Saturday. The Tigers have now won four in a row and have quietly gotten better production from an offense that had struggled at the beginning of the year. The Tigers now deserved to be ranked but we still can’t ignore the average play through the first half of the year.

NC State continues to look like a pretty complete football team after blowing out Syracuse 41-17. Look for a slight boost this week from where the Wolfpack were in last week’s rankings.

Brady Hoke has his Aztecs team with ten wins on the season now. It’s not always been super impressive, but that win over Utah earlier in the year looks better and better each week. There’s no reason for much movement, either way, this week after an eight-point win over UNLV.

It has been one of the best seasons in Winston-Salem for a long, long time, but we’re seeing the Demon Deacons get exposed here as they play better competition. Clemson handed Wake Forest its second loss of the season, and there will be a significant drop. With Pitt’s wins over like opponents Clemson and UNC, you have to think the Panthers move ahead.

Is Pitt the best team in the ACC? It’s sure looking like it behind quarterback Kenny Pickett and an offense that can put up a gob of points on the opposition. A close win against an average Virginia squad won’t make a case to move the Panthers up very much despite having just two losses on the season.

After regressing for two-straight weeks midseason, Iowa has pushed the pendulum back the other way with three-straight wins. The Hawkeyes aren’t flashy, but they still have some pretty solid wins with an outside shot at still getting to Indy to play for a Big Ten title depending on what Wisconsin does next week.

Utah is looking better and better as the season progresses, especially after knocking off No. 3 Oregon on Saturday for the best win of any team this past week. Look for Utah to make a significant jump — maybe the biggest jump in the rankings after four-straight victories.

There’s not really much we can take from many of the SEC teams this week. Texas A&M destroyed a very undermanned Prairie View Saturday. It’s been an up and down season for the Aggies, but the win over Alabama is one of the best any teams in college football have to date. So, not much movement this week.

Wisconsin sure looks like it has figured things out from early in the season when turnovers and mistakes came in bunches. It was a close one against Nebraska, but the Badgers still got a win to remain in about the same spot as last week.

In most years, BYU wouldn’t get the benefit of the doubt, but there are a lot of games against Power Five teams, including wins over Utah and Arizona State. The Cougars also played Baylor close, so all of that has led to a pretty high ranking. There won’t be much movement here either after a win over Georgia Southern.

It’s hard to figure out what the committee is going to do with the Spartans. It already had Michigan State below a Michigan team it beat head-to-head, and now there’s a really bad result against Ohio State to throw into the mix. We say Mel Tucker’s team falls pretty far after what we saw on Saturday.

The committee hasn’t had a ton of respect for Oklahoma because of all of the close shaves, but the Sooners have found a way to win all but one contest. It was another close game against Iowa State, but yet another effort to pull it out against a talented team. The Sooners stay in the same neighborhood and look to make a statement in Bedlam next week.

Ole Miss beat up on Vanderbilt, and that doesn’t really tell us much. The reality is that the Rebels are 9-2 in the league that the committee loves, so Lane Kiffin’s crew will remain with a pretty lofty ranking after a couple of wins over ranked opponents.

Nov 13, 2021; Waco, Texas, USA; A view of the Baylor Bears students and fans as they celebrate with linebacker Terrel Bernard (2) on the field after the game between the Baylor Bears and the Oklahoma Sooners at McLane Stadium. Credit: Jerome Miron-USA TODAY Sports

Everyone is talking about Oklahoma and Oklahoma State’s matchup next week, but if things fall correctly, the Bears are ready to bound up the rankings. The wins over Oklahoma and BYU are two solid wins that the committee loves.

The big question here is how far does Oregon fall after getting smoked by Utah? I don’t think you can put the Ducks ahead of many of the one-loss Power Five teams, so look for them to fall just behind Oklahoma State. The win over Ohio State still has to count for something in separating the two-loss squads, right?

How much do we really know about the Cowboys? There’s just one loss, of the 3-point variety vs. Iowa State, but there’s only one win over a ranked opponent. Still, the Cowboys have looked impressive and have the win over Oklahoma. Those two combos seem to be what the committee is looking at more than anything else. The loss by Michigan State moves Mike Gundy’s crew ever so closer to the top four.

The lone loss to Cincinnati may end up costing Notre Dame a CFP spot, but the Irish have just hung around in the waiting room looking for an opportunity to move up. Slowly but surely, that’s exactly what is happening. The Irish have looked impressive aside from the game against the Bearcats but there’s not a whole lot of teeth in the schedule. The Wisconsin win might end up making a world of difference if a few more things go Notre Dame’s way ahead of it.

Give credit where credit is due. Michigan has continued to improve throughout the season and now looks like a pretty complete football team with some impressive wins on the season. Everything is there for the taking if the Wolverines can break the Buckeye curse this coming weekend. The Wolverines will move up even further after the Oregon loss.

The committee has tried about as hard as it can to keep Cincinnati out of the top four, but that may have to end after Oregon’s loss. The schedule isn’t great, but Cincy remains undefeated with the all-important win over Notre Dame. Welcome to the big boy club, Luke. The Bearcats might just find a way to claw their way into the CFP.

Ohio State looked more impressive than any other team in the country by blowing out No. 7 Michigan State. The Buckeyes should probably be moved up to No. 2 after the loss by Oregon and the close game Alabama had against a lower-ranked Arkansas team. Don’t bank on it though. The committee loves itself some Crimson Tide. Honestly, it really doesn’t matter, but we’ll see if the committee proves me wrong here and does the right thing. Don’t hold your breath.

We continue to see chinks in the armor for Alabama, but it’s still Alabama and the Tide has continued to get puffed up by the committee. Look for Nick Saban’s crew to stay at No. 2 after a close battle with Arkansas, and with the Iron Bowl on tap. Then, it might be on to face big, bad Georgia. The question everyone is asking: Will the committee dare put a two-loss Alabama team in the CFP?

Need we even say anything here? We can’t wait to see what happens when the Bulldogs face Alabama. Other than that, it’s clear that Georgia is No. 1 right now, but I’d love to see Ohio State’s offense against the UGA defense. So would the rest of the country.