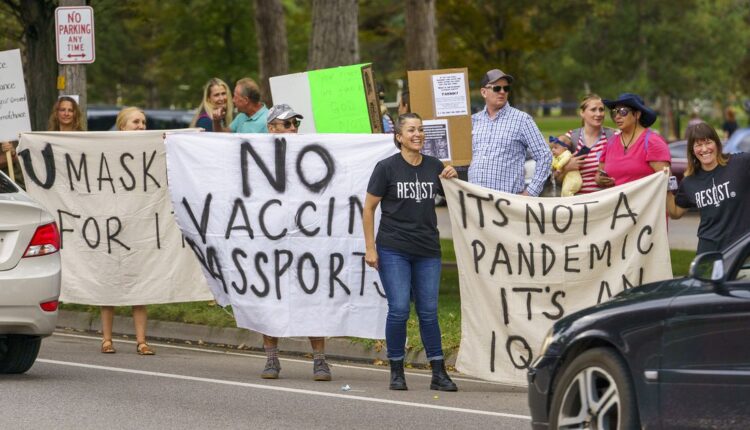 About 100 protesters gathered for the Rally for Freedom to protest against government mandates to protect public health.

(Leah Hogsten | The Salt Lake Tribune) Protesters gathered along 700 East in Liberty Park to protest vaccination and mask mandates and other public health measures against the pandemic.

About 100 protesters, waving American flags and holding signs dismissing mask and vaccine mandates, gathered along the curb of 700 East in Liberty Park on Saturday, making Salt Lake City one of dozens of cities around the world that protest against public health restrictions.

The international group World Wide Demonstration sponsored such events on Saturday everywhere from Denmark to South Africa to Taiwan – the so-called rally for freedom. The group held other rallies throughout the pandemic to protest public health mandates as well.

A leading theme among protesters was President Joe Biden’s order that companies require vaccines if the company has 100 or more employees, a move that could affect approximately 100 million Americans. Federal employees must also present a vaccination certificate.

Sandy protester Andrea Woolley said she could “face the loss of her job pretty soon” because of the executive order for unwilling to be vaccinated against COVID-19.

Woolley and the other protesters compared many of the public health measures taken during the pandemic to tyranny.

“Government shouldn’t be able to impose anything on people,” said Harris.

Logan’s Harris said he believed he and millions of other Americans who contracted COVID-19 and recovered are now protected by a natural immunity, much like someone who contracted chickenpox would be immune after recovering against this virus.

Not all protesters agreed with the severity of the pandemic. Harris, who said his symptoms of COVID-19 were only flu-like, said the pandemic was a “huge” problem. Woolley said she did not “recognize” the pandemic and had lived life unchanged for the past year and a half.

“I just go about my own business, my own life,” said Woolley.

Tooele’s Ray Adams called the pandemic “counterfeit” and that he was resisting public health measures against COVID-19 “at any hour.”

Adams said he was not a conspiracy theorist because there were too many facts to prove that there is a worldwide organization that is benefiting from the pandemic.

“I think the vaccine is the way to clean up Americans,” said Adams.

Climate change is happening right now in Colorado, here’s how