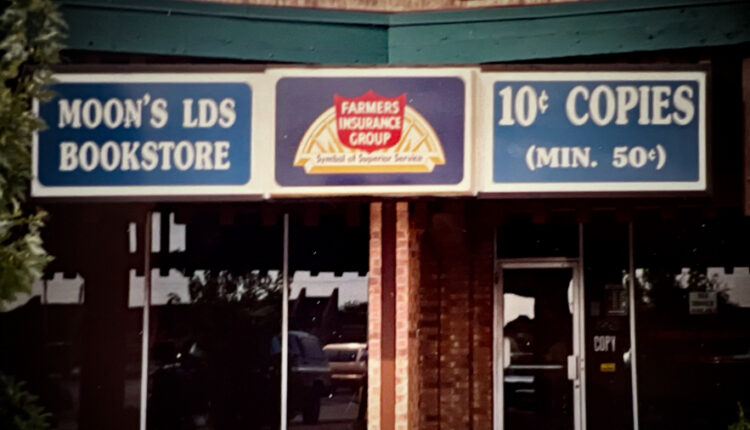 PROVO, Utah — Reid Moon is a treasure hunter of sorts. He figures he’s traveled the equivalent of more than one hundred times around the Earth in search of one-of-a-kind items, some, he said, cost hundreds of thousands of dollars.

His Provo shop, a cross between a bookstore and a museum, displays many of the items for sale and items not for sale – a first edition Dracula, the Anna Karenina that Ernest Shackleton took with him to Antarctica, Florence Nightingale’s Bible, a first edition of Cat in the Hat, as well as rare LDS books and movie memorabilia.

Showcasing the items on TikTok has earned him almost half a million followers on that social media platform.

Out-of-state visitors who have seen it online, he said, often find their way into the store.

Moon grew up in Dallas, where his parents ran a combination insurance agency and bookshop.

He wasn’t interested in insurance, but he took to selling books. He wasn’t a reader, at first, but became one.

So he could better help his customers, he began taking home a book a day and read a thousand books, he said, in three years to catch up on what he’d been missing.

A few years ago, he moved the shop from Dallas to Provo.

His search for treasure, though, can take him anywhere at any time.

“I get leads. I get an email or a phone call. ‘Hey, are you interested in this’ and been leaving the bookstore on my way home, gotten a phone call, and gone straight to the airport, no change of clothes or anything,” he said.

Moon wasn’t surprised when he received a call from Belgium one Saturday. A man said in broken English they had met at the Paris Book Fair and Moon had given him a business card with the word ‘bible’ written on it.

The man knew of a 1947 Bible for sale. Moon wasn’t interested. The man told him who once owned the Bible. Moon said he’d buy it.

Turned out the Bible wasn’t in Europe. It was in Kansas.

Moon, who, at the time, was still in Texas, called the owner there. There was another buyer in New York.

“I said, ‘Well, what did you tell him? Same thing I’m telling you first person here with the money gets it,’” Moon said.

He checked the flights to Kansas. There was only one leaving in a few minutes but there was no time to get to the airport.

He’d have to make the seven-hour drive.

“I was literally walking out the door and I hear one of my kids ask ‘Dad, what’s for lunch?’ And then I remember I’m watching the kids. My wife’s not even home,” he said. He and his wife have four children.

“I remember we crossed the Red River in Oklahoma and then I told my oldest daughter ‘Oh, text your mom,'” he said.

Seven hours later they arrived in Kansas and Moon purchased the book.

“I opened it up I see the annotations made in the margin. And I opened the front and I see that one of the most iconic beautiful signatures that there ever was,” Moon said.

It was a Bible signed and once owned by JRR Tolkien. It was the Bible Tolkien owned when he wrote Lord of the Rings, one of Moon’s favorite books.

“I just love the hunt. But I love what the books represent. And the stories that they can tell,” he said.