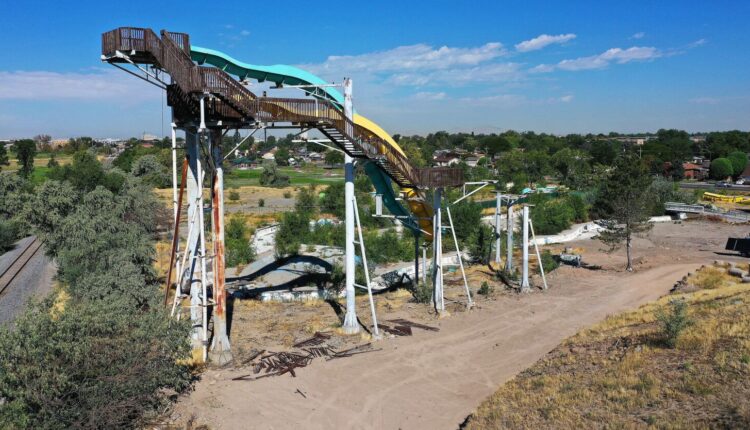 The future of the demolished Raging Waters may be as “bright and colorful” as the old water park’s slides were.

In this case, Salt Lake City planners envision radiant-looking playgrounds, plaza spaces and pavilion feature art that not only matches the space’s history but also captures the lively culture of the Glendale community.

This is a key theme that has emerged in a new Glendale Region Park draft master plan, which the Salt Lake City Parks and Public Lands Department released late last week.

“First and foremost, we really want it to be centered around what the Glendale community wants to see. And what we heard from them in our initial public engagement, is really a bright, vibrant, lively space that kind of reflects the culture and diversity of the Glendale neighborhood itself,” said Katherine Maus, a public lands planner for Salt Lake City Public Lands.

“And second, it’s kind of a nod to the old Raging Waters site.”

The future of Glendale Regional Park?

There are 30 features included in the draft plan, including traditional open picnic and gathering spaces, as well as playgrounds, splash pads, basketball and pickleball courts, a hiking/sledding hill and many other features associated with most city parks. It also has features that connect it with the Jordan River and Jordan River Parkway Trail, such as new boating ramps, restoration of native riparian areas and even a riverside beach large enough for volleyball.

A rendering of a community plaza/promenade at night that is included in a new Glendale Regional Park draft master plan. The park would include a mixture of outdoor recreation and community gathering space.

There are also plans for plazas and stages that make the park perfect for hosting community events or just offering a space for food trucks to park — and many of these structures would be brightly colored to match the overall theme of the space.

In short, the plan is a complete turnaround for a space that’s been vacant for nearly five years at 1200 West and 1700 South.

Raging Waters/Seven Peaks first opened in the 1980s, but it closed down in 2018. The abandoned water park slowly turned into a hot spot for criminal activity within two years of the closure.

A rendering of a winter skating ribbon included in a new Glendale Regional Park draft master plan. The ribbon, using the path of the old Raging Waters lazy river, would be used for roller skating in the summer.

Then last year, Salt Lake City Mayor Erin Mendenhall announced that she wanted to turn the 17-acre space into a regional park for the city’s west side, fulfilling a requirement — based on past federal and state money the original project received — to keep it an open recreation space and a desire for a regional park in the area.

The federal requirement also stipulates that the land must be opened by April 2024, which is why Maus and other city planners are racing to piece together a plan that meets the requirements and the desires of the people who will use the park. Planning started with input from students and other residents who live in the Glendale area before the city began a wider public input process earlier this year. 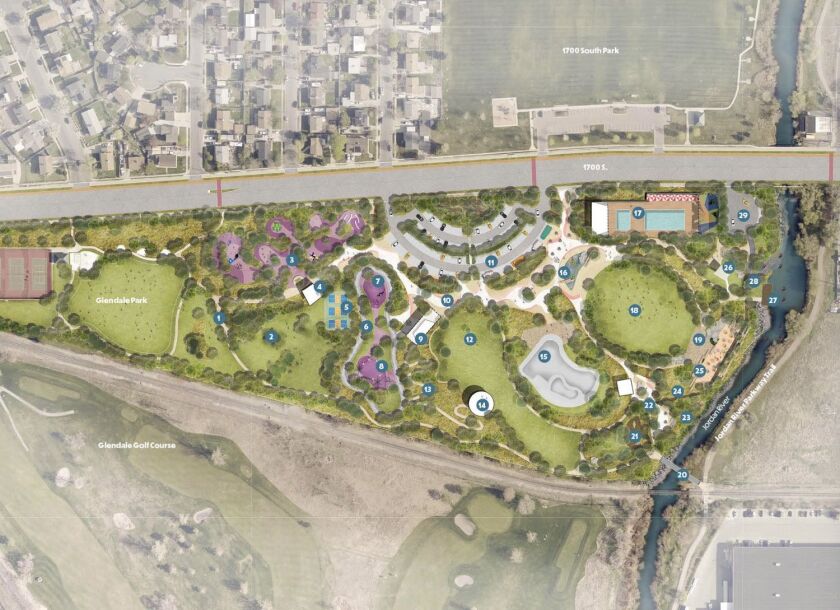 An artist rendering of the proposed layout of the Glendale Regional Park included in a new draft master plan. The plan will go through a public comment period where adjustments could be made before it is approved by the Salt Lake City Council either by the end of this year or early next year.

A preliminary report of the feedback that Salt Lake planners provided the City Council in May suggested some of the features included in the draft master plan, such as a water feature like a public pool.

“One of the (top) requests for inclusion in the park plan was a water feature,” Maus said. “I think people were a little bit sad to see the water park go, and so having water highlighted in the design was important for the community.”

The proposed master plan will be presented to the Glendale Neighborhood Council next month before it is sent to Salt Lake City’s planning commission and Salt Lake City Council for final approval, either later this year or in early 2023. Some tweaks to the plan may be made along the way.

The point of releasing it now is so residents have time to review it before the Sept. 21 community meeting and other public meetings. While the draft plan has only been out for a few days, it has garnered mostly positive feedback so far.

“I think it is extremely exciting. I’m very, very pleased to see how many elements (planners) were able to include in the master plan,” said Turner Bitton, the chairman of the Glendale Neighborhood Council, adding that the feedback he’s heard within his community so far has been equally supportive.

That said, many of the features outlined in the plan likely won’t exist when the park does open in 2024. The city has directed $3.2 million in funds toward park construction in the form of impact fees — one-time fees developers pay for new construction that goes into public uses like parks. This is being used to get some of the primitive features ready for opening day, according to Mouse.

The future budget could grow exponentially if an $85 million general obligation bond is approved by Salt Lake voters in November; nearly one-third of the bond — $27 million altogether — would go toward Glendale Regional Park construction. Maus says this money would build the park out “substantially.” 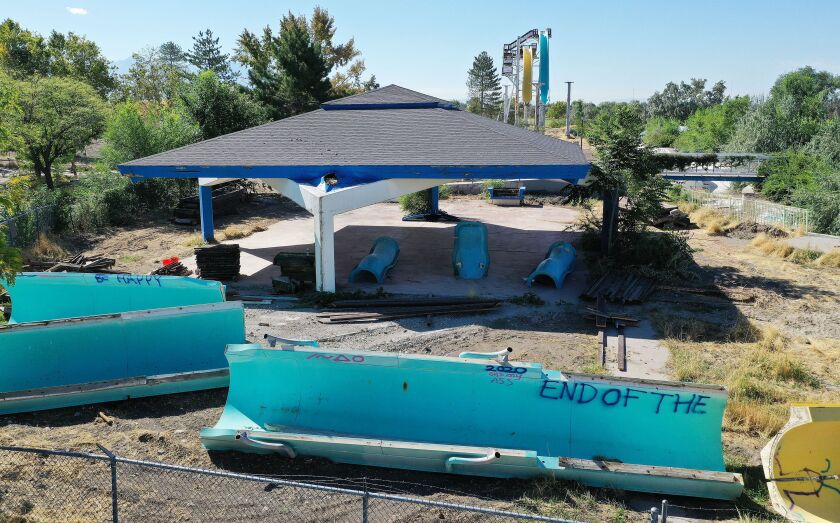 Ultimately the bond will really only speed up the construction process, though. If voters reject the plan, Maus said the city will still construct the park that residents want but it will almost certainly come in parts at a time.

“It will likely extend the timeline a lot, and we would open the park in phases,” she said.

No matter the project timeline, residents in the Glendale community are eager to see the park come together, Bitton says. Many people in the area have fond memories of the water park, which is why a water component likely rose to the top of many wish lists.

Residents were heartbroken as they watched the park decline and turn into a city problem. But he said there’s renewed optimism with a regional park, which has the potential to be on par with the city’s iconic Liberty Park.

“This is huge,” Bitton said. “Having this space built out is going to create a gathering space, performance spaces and really a place for the community to come together for generations.

“This is really a generational investment in our neighborhood that’s going to transform an area of ​​the neighborhood (that’s dealt with crime problems),” he added. “This is going to remedy that by creating a space that’s alive, where the community can come together and share space.” Help us fight to keep our boy SAFE!