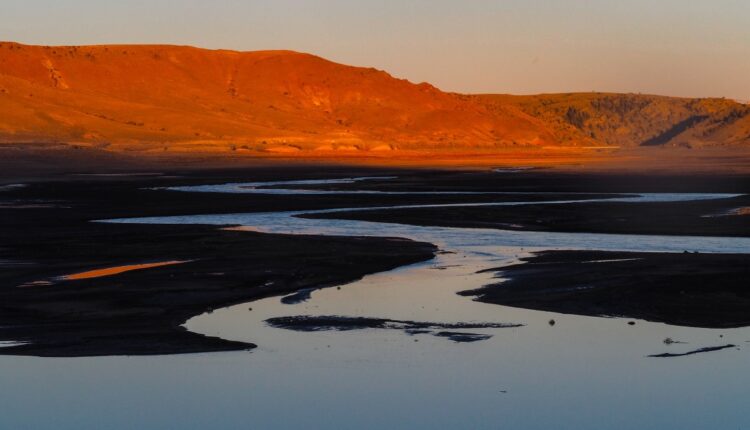 Federal officials Tuesday gave more time to Colorado and its neighboring states to agree on the massive cuts in Colorado River use needed to protect the country’s two largest reservoirs, even as they announced that historic cuts were coming to parts of the Southwest.

Officials said that Lake Mead, east of Las Vegas, would operate in its first-ever “level 2a shortage condition” in 2023, triggering previously agreed upon reductions in water use in Arizona, Nevada and Mexico. California does not take cuts under this shortage level.

Bureau of Reclamation Commissioner Camille Touton said during a Tuesday call with reporters that the federal government would continue to work with the seven Colorado River Basin states to find consensus on new water cuts in response to federal officials identifying the need for 2 million to 4 million acres -feet in water savings needed next year. Officials identified those cuts as necessary to protect critical infrastructure at Lake Powell and Lake Mead as well as hydropower production.

Officials initially gave the states two months to come up with ideas for how to meet that target, with a Tuesday deadline.

“There are a lot of conversations about how we collectively mitigate the impacts of drought and climate change on the Colorado River and our shared goal of formulating durable and equitable solutions,” Touton said during the call. “But to date, the states collectively have not identified and adopted specific actions of sufficient magnitude that would stabilize the system.”

Touton, however, gave no indication as to what specific cuts the federal government is willing to make if a collective agreement is not eventually reached. Instead, she said, “more information will be forthcoming regarding next steps and the process that we will follow.”

Touton and other officials continually stressed the need for a collaborative approach.

“We’re continuing to work with the basin states because we believe that the solution here is one of partnership,” Touton said.

As water stewards, it is our responsibility to protect the system and the millions of Americans who depend on it.

“There’s still time for that,” said Tommy Beaudreau, deputy secretary of the interior.

Water managers also said they would study whether it might be possible to operate Lake Powell at a level below what is now considered “deadpool,” the level at which water cannot flow beyond the dam.

The bureau also said it would work with the Upper Basin states of Colorado, Utah, New Mexico and Wyoming, tribes and other stakeholders to implement “substantial releases from Upper Basin reservoirs” to help prop up the water level at Powell.

Lake Powell could fall below elevation 3,490, the lowest level at which Glen Canyon Dam can generate hydropower, as early as sometime next year, according to the bureau’s latest report.

Forty million people rely on the Colorado River for drinking water and farmers and ranchers use the water to irrigate millions of acres of farmland.

Flows on the Colorado River have declined roughly 20% since 2000 amid a drought scientists believe is the driest 22-year stretch in the past 1,200 years.

“Every sector in every state has a responsibility to ensure that water is used with maximum efficiency,” assistant secretary for water and science Tanya Trujillo said in a written statement. “In order to avoid a catastrophic collapse of the Colorado River System and a future of uncertainty and conflict, water use in the Basin must be reduced.”

The Upper Basin states responded to the commissioner’s call for cuts in a July 18 letter. The letter laid out an Upper Basin plan, but did not identify a specific amount of water that could be saved. 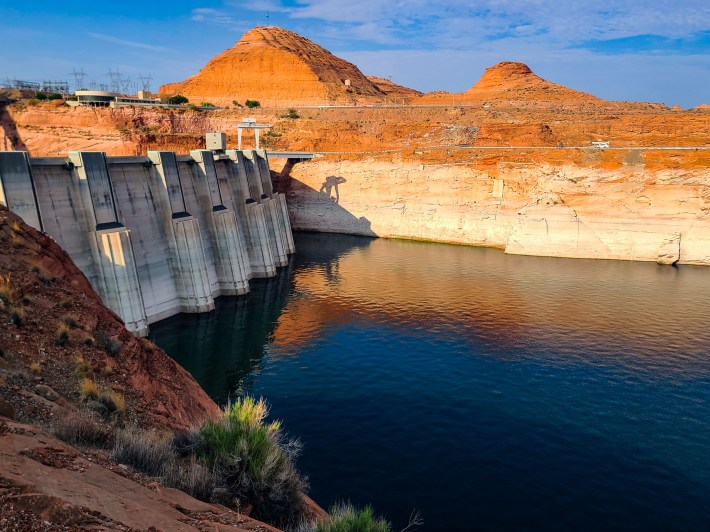 Glen Canyon Dam at Page, Arizona, holds back the massive Lake Powell. Since this photo was taken on Aug. 21, 2021, drought conditions in the West have led levels of water in the lake to drop near where the dam will no longer be able to generate electricity. (Bureau of Land Management)

Signed by Charles Cullom, the executive director of the Upper Colorado River Commission, the letter noted that the options available to the Upper Basin states to help maintain critical reservoir elevations are “limited,” and that “significant actions” would need to be taken downstream of Lake Powell.

Top water officials in Colorado have maintained the majority of the cuts identified by the commissioner would need to come where most of the water is used — the Lower Basin states of California, Arizona and Nevada.

Colorado River Commissioner Becky Mitchell reiterated Tuesday in a written statement that the Upper Basin plan would not be as effective without significant action downstream.

“This will require leadership from the US Department of the Interior through the US Bureau of Reclamation, and bold action across the Basin,” Mitchell said. “Downstream of Lake Mead and Lake Powell, depletions must come into balance with available supply.”

Depending on snowpack and runoff, between 600,000 and 4.2 million acre-feet will need to be conserved over the next four years to stabilize lakes Powell and Mead, according to a Bureau of Reclamation analysis. (An acre-foot is the amount of water it takes to cover an acre in a foot of water or about 325,000 gallons, enough for about two or three households annually.)

On Tuesday, the bureau also released its August 24-Month Study, a key report that indicates how Powell and Mead will operate in the upcoming year. The study projects the water level at Lake Powell in January 2023 will be at about 3,522 feet above sea level, 32 feet above the elevation at which Glen Canyon Dam can no longer generate power, 3,490 feet.

The bureau said that other Upper Basin actions would include studying whether modifications could be made to Glen Canyon Dam so that water could be pumped or released below the currently identified low water elevations.

“The solution to our challenges relies on the bedrock of a century of collaboration and partnership in the Colorado River Basin,” commissioner Touton said in a written statement. “But as water stewards, it is our responsibility to protect the system and the millions of Americans who depend on it.”