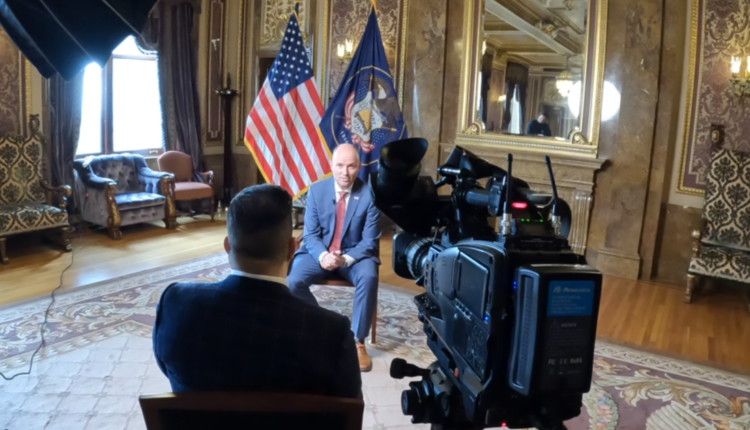 “I feel really good about this session. Better than I have in a long time,” he said.

Asked to name his top priorities for the 2023 legislative session, the governor replied: “Teacher pay. Something that we’ve been advocating for, something I believe in,” he said.”Tax cuts are another big one for us, that are very important. We’ve been very successful as a state and we have an opportunity to give back.”

The governor signaled his tentative support for a controversial school voucher bill — if public education gets funding boosts. He said discussions were under way on it. gov. Cox also did not predict a flock of people leaving public schools, the bill should ultimately pass.

“Our public schools are very, very popular in this state. We have some polling that shows that 90-ish percent of people are very satisfied with their school, very happy with their kid’s school,” he said. “So I don’t anticipate even if there is a school choice we would see a mass exodus in a way that would hurt public education or funding for public education.”

Still, the bill is expected to face significant pushback from education groups. It failed to pass the House of Representatives last year.

The governor also said making housing more affordable in Utah is another big issue for his administration. So is saving the Great Salt Lake, which is at record lows.

“I’m telling people on my watch we are not allowing the lake to go dry. We will do whatever it takes to make sure that doesn’t happen,” Gov. Cox told FOX 13 News.

The governor said public and legislative support for the Great Salt Lake has been “tremendous.” But pressed on whether water will ultimately get into the lake to refill it, the governor insisted Utahns would see results from Capitol Hill. Measures passed last year are going into effect. Lawmakers will also consider more water conservation bills and spending.

gov. Cox’s priorities appear to align with those in the legislature. House and Senate Republican majorities have identified teacher pay, the Great Salt Lake, affordability and other issues among their top items to tackle this session. The governor has proposed a $28 billion budget.

Asked if there were bills that troubled him, Gov. Cox referenced the sheer volume of bills lawmakers run. Every year, there are around 1,500 bills introduced in a legislative session. About 500 passes.

“All of the social issue bills concern me because even well intentioned, they can end up being very divisive,” he said.

Last year, the governor vetoed a bill that banned transgender girls from participating in school sports matching their gender identity. The legislature met in a special session to override him. This year, more bills have been introduced on transgender youth, including banning some medical procedures or treatment. gov. Cox wouldn’t say if he planned to veto them. He said he would look at the bills and conversations were under way about some of them.

“We’ll try to get to a place that is supportive of our LGBTQ community and one that hopefully the legislature can agree on as well,” he said.

gov. Cox will deliver his annual State of the State address to the people of Utah on Jan. 19. The governor said his speech would focus on policies that help Utah families and improve things for generations to come.