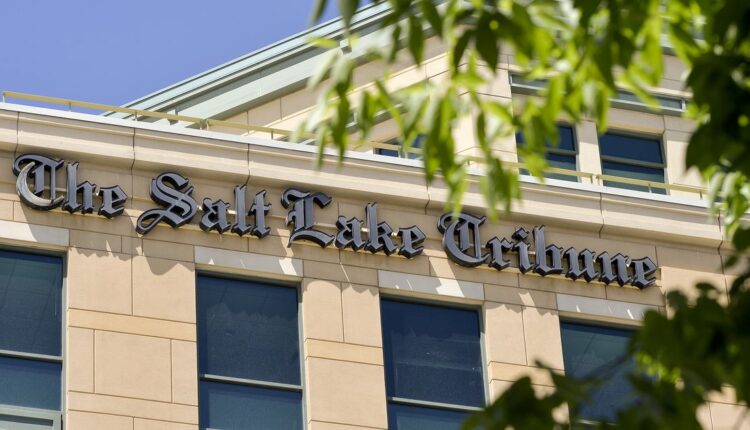 The Salt Lake Tribune’s reporting, editing and photography have been honored by the Utah chapter of the Society of Professional Journalists.

Among the highlights for The Tribune:

• The Tribune was honored as Utah’s best news-oriented website.

Family members at a vigil at the State Capitol in Salt Lake City for Staff Sgt. Taylor Hoover on Sunday, Aug. 29, 2021. Hoover was killed in a suicide bombing in Kabul, Afghanistan. The photo was among those that earned Salt Lake Tribune photographer Trent Nelson the award for “best photographer” at the Society of Professional Journalists’ Utah Headliners chapter’s annual contest, whose results were announced June 16, 2022.

• The Tribune’s reporters also received first-place awards for continuing coverage (of rural homelessness) and general feature reporting (for coverage of the deaths of Paiute children at a state-run boarding school).

Among the special awards given out Thursday night, The Tribune received two of them.

One was the Josephine Zimmerman Pioneer in Journalism Award, given to the team of journalists from The Tribune — notably reporters Jessica Miller and Paighten Harkins, and former staffers Matt Canham and Sam Stecklow — and PBS’s documentary series “Frontline,” for the “Shots Fired project. The project combined investigative work, data journalism and “uniquely effective multi-platform storytelling” in building a database of police-involved shootings in Utah — a database that no law enforcement agency had compiled on their own.

The other was the Public Service Award given to the Utah Investigative Journalism Project, for its two-year reporting project “The Eviction Empire,” in partnership with The Tribune. Reporters who worked on the project reviewed thousands of documents, and interviewed nearly 150 sources — including more than 100 evicted Utahns to understand their experiences. The project created a website, EvictedInUtah.com, which consolidated renters’ resources and explained Utah’s housing laws in plain English.

Here are the awards received by The Tribune in this year’s annual contest. (For a full list of winners from all news outlets, including radio and television, go to the SPJ Utah chapter’s website, UtahSPJ.com.)

(Trent Nelson | The Salt Lake Tribune) Edgar Gago, a man living on the streets of Provo, stood for a portrait on Sunday, May 16, 2021. The photo was among those that earned Salt Lake Tribune photographer Trent Nelson the award for ” best photographer” at the Society of Professional Journalists’ Utah Headliners chapter’s annual contest, whose results were announced June 16, 2022.

• Third place: Kolbie Peterson, “Enter the world of the Goodwill Outlet bins, where some Utahns are feeding the ultimate side hustle.”

• Third place: Jessica Miller, shared with Nate Carlisle, FOX 13, “Here are the men who died from COVID-19 in Utah’s prisons.”

• Third place: Matthew D. LaPlante, “With Parler ban, Utah police and others may have lost a window into planned protests.”

• Third place: Becky Jacobs, “How the other half eats.”

(Rick Egan | The Salt Lake Tribune) The city is not allowing unsheltered people to sleep in tents, so a woman covers herself with a blanket under an overpass, trying to stay out of the snow, on Tuesday, December 28, 2021. The photo earned Tribune photographer Rick Egan a first-place honor in the “general news photo” category at the Society of Professional Journalists’ Utah Headliners chapter’s annual contest, whose results were announced June 16, 2022.

(Rick Egan | The Salt Lake Tribune) Two wild horses from the Onaqui wild horse herd spar and fight, after the first day of the removal of wild horses from Utah’s Onaqui Mountains near Dugway, on Wednesday, July 14, 2021. The photo was part of a package that earned Salt Lake Tribune photographer Rick Egan a third-place honor for “photo essay” at the Society of Professional Journalists’ Utah Headliners chapter’s annual contest, whose results were announced June 16, 2022.

• Third place: Xoel Cardenas, Andy Larsen and Eric Walden, “How ‘Bout This Jazz, Ep. 11: Can the Utah Jazz backcourt step it up on defense?”

Use of news-oriented social media