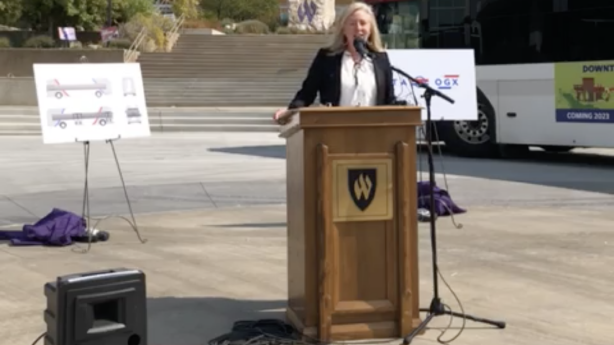 UTA Board of Trustees Beth Holbrook speaks during a press conference on Wednesday to announce the new name of the BRT project in Ogden. The future bus system should be completed by 2023. (Utah Transit Authority)

OGDEN – Everyone on board the Ogden Express!

The leaders of the Utah Transit Authority, Ogden City and Weber State University came together on Wednesday to announce that Ogden Express, or OGX, will be the official name of the express bus system that runs through the Ogden FrontRunner UTA station and Weber State campus University will join. So far it has been referred to as the Ogden / WSU BRT project.

“I couldn’t be more excited about it … this is going to be a generational project,” said Ogden Mayor Mike Caldwell. “Once that’s open, I can’t wait to drive it.”

Beth Holbrook, member of the UTA Board of Trustees, said the new name is the result of a joint effort by executives with UTA, Ogden, Weber State and various other organizations, including local business and tourism agencies. She explained that they had chosen a name that would identify the community served by the transit system and what the service would be like.

UTA officials announced in April – when they laid the groundwork for the $ 120 million project – that it is expected to be completed by 2023. The first three years of service are due to grants from the Federal Transit Administration which make up most of the cost of the project. Cindy Terwilliger, an FTA regional administrator, said $ 78.3 million in federal grants were allocated to the project.

Holbrook said Wednesday that the Ogden Express will include 11 all-electric buses that will run between 22 stations in Ogden when the project is complete. Three of the buses will replace the Weber State Shuttle in August 2022, she added.

Brad Mortensen, President of Weber State University, has been impressed with the progress that has been made since the groundbreaking in April. Looking at his surroundings, including the Wasatch Mountains near Ogden campus, he said he was grateful for the decision made in the past to put the university where it is, and he expects future students as well Residents will feel the fast bus system.

“I am very confident that from now on people will look back on this investment on our campus and community with the same positive light – to see what a great symbol this is,” he said. “We know that it will be a great enrichment for all parishioners who want to use the cultural and leisure opportunities here.”

“These projects are really designed to be collectively connected, and that’s the goal we’re driving forward,” she said. “Not only do we set the standards for our BRT naming conventions, we also set some of the branding standards for our designs.”