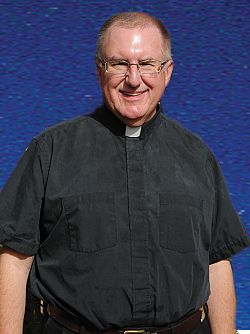 OGDEN — Heading into the wilds of Alaska is not what “retirement plans” means to most people, but for Father William Wheaton it will be a dream fulfilled. Br. Wheaton, who has served as a priest in the Diocese of Salt Lake City for 30 years, will retire at the end of July and fly to Alaska to begin a ministry there.

“For me, retirement isn’t retirement. It’s really turning the page to do something that I’ve always wanted to do,” said Fr. Wheaton, who is pastor of Holy Family Catholic Church in Ogden.

His life experience has prepared him for the path ahead, he said.

Fr. Wheaton is a cradle Catholic. His mother was Catholic while his father was a member of The Church of Jesus Christ of Latter-day Saints. He has been loved and supported by both sides of his family, he said.

Born and raised in Ogden, Fr. Wheaton attended St. Joseph Elementary and St. Joseph High School. In high school he realized he had a strong desire to be a missionary, so after graduation he attended Holy Ghost Fathers Seminary at the University of St. Thomas Houston, where he studied for five years and earned a bachelor’s degree in philosophy and theology.

Still, “I wasn’t ready at that time to make a commitment to vows,” he said, so he began a career in Catholic education. He received a second bachelor’s degree, in English, from Weber State University and began teaching at St. Joseph Elementary, where he remained for six years. He completed a master’s degree in secondary education at Utah State University and earned a doctoral degree in school administration. After four years at Ursuline Academy of Dallas, Fr. Wheaton began to again contemplate the priesthood.

“I still always felt that calling to priesthood even though I had gone down a different career path for a while,” he said.

He contacted the Salt Lake diocese’s vocations director at the time, Fr. (Msgr. 2005) Michael Winterer, and then started formation in theology at Mt. Angel Seminary in 1988.

Fr. Wheaton was ordained on June 27, 1992 at St. Ambrose Catholic Church by the Most Rev. William K. Weigand, seventh Bishop of the Diocese of Salt Lake City. He was appointed the diocese’s director of religious education, a position he held until July 1996. At the same time, he served as administrator at St. Peter Parish in American Fork. He went on to serve as pastor at the parishes of Notre Dame (1996-1999), St Francis Xavier (1999-2004) and St Ambrose (2004-2009). During his ministry, he also served in the missions of southeastern Utah, “which is something I always wanted to do,” he said.

He spent six years as pastor at St. Pius Parish in Moab and St. Joseph Parish in Monticello (2009-2015) and also worked at Sacred Heart Mission in La Sal.

“While I loved all of my assignments, the ones that I think I loved the most were the challenges of being in southeastern Utah,” he said. “There you know people. It’s more personal; you’re part of people’s lives and families.”

Five years ago, he returned to Ogden as pastor at Holy Family Catholic Church. Since then, he has planned for his retirement and already has received a three-year assignment in the Diocese of Fairbanks. He will serve at three missions there. He will also celebrate Masses seasonally in Denali National Park from May to September and will rotate into the bush missions every two to three months.

Fr. Wheaton hopes to be able to serve in Alaska as long as he can. He is prepared for the arduous experience, having visited and traversed the state several times a year in all seasons for the past 30 years. He has also developed a love for the people, especially those in the smaller communities of the frontier.

“I love the notion of bringing Christ to people who are in some ways forgotten,” he said. “I just find they don’t feel entitled. They feel a sense of appreciation for just the fact someone is able to come and celebrate Mass and be with them.”

The parish held a farewell reception for Fr. Wheaton on June 12.