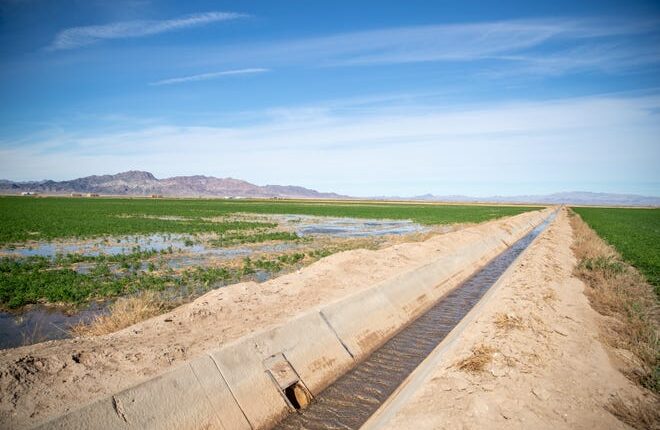 Tribes play a bigger role in the Colorado River talks

LAS VEGAS – Tribes from across the Colorado River basin came to Las Vegas this week to seek a more prominent role in water supply management amid an ongoing drought while still battling for the right to the water they maintain their communities need.

Tribal leaders joined other water officials, experts, and advocates in the annual meeting of the Colorado River Water Users Association. Tribal growing influence was evident in the latest plan to expand the river in Arizona, Nevada, and California, but leaders said they wanted to remain an important voice on the 246,000 square mile watershed.

In addition to federal and state flags, this year’s conference also included flags from members of the Ten Tribes Partnership, a consortium of communities on the Colorado River. Tribal officials spoke on panel discussions during the three days of the meeting, a change from the past when the tribes mainly appeared in native-focused panel discussions.

“The tribes will definitely be at the table,” said Terry Goddard, president of the Central Arizona Water Conservation District. Tribal governments are currently working with state, state, and other water agencies to develop the new Colorado River management guidelines, due to take effect January 1, 2026. In contrast, when developing the 2007 interim guidelines, Tribes were excluded from the talks Bottlenecks.

Camille Calimlim Touton, the recently sustained commissioner of the Bureau of Reclamation, said Wednesday that the infrastructure bill recently passed by Congress will allocate $ 2.5 billion to wind up Indian water rights settlements to help the Home Office meet its obligations to Native American tribes help.

“We are ready to be a full partner for those who want to work with us,” said Touton.

She highlighted Gila River and CRIT, who have worked to reduce the risk of Lake Mead falling to more precarious levels.

“The drought is having very real impacts on humans and the environment,” said Touton, “including tribal communities who all too often have denied and denied their dreams, fearful of the loss of species of cultural significance.”

Maria Dadgar, executive director of the Inter Tribal Council of Arizona, offered a land recognition – a statement identifying the tribe or tribes whose ancestors are the country of the event or venue – probably the first at the gathering.

“We all agree, whether we are indigenous people or not, that water is vital, and therefore water is life,” said Dadgar, a member of the Piscataway Tribe in southern Maryland. “We also believe that where there is a body of water, it is a sacred place.”

The importance of a river’s health

The Inter Tribal Council of Arizona recently met with Maori tribal leaders from New Zealand and found that the widely dispersed indigenous peoples shared this opinion with the tribes of Arizona, she said.

“The Maori tribes said human health was correlated with the health of the river,” Dadgar said. “If you understand this, you will understand the position the tribes take as they approach their work of negotiating the Colorado River.”

But while indigenous nations have the highest water rights, the tribes have not historically been part of negotiations over the management of the Colorado River, she said. Dadgar said this should be considered history as tribes are playing a vital role in the implementation of the drought contingency plan.

“We will see that the tribes are here to play an integral role in all Colorado River management decisions,” she said.

Dadgar pointed to three separate collaborations the Arizona tribes are forming to work together to build water management capabilities as they grow up to be key players in the health of the Colorado River, which supplies water to approximately 40 million people in the Southwest.

A new agreement, signed at the conference Wednesday, reaffirmed the commitment of the Colorado River Indian Tribes and the Gila River Indian Community to keep a total of 179,000 acre-feet of their water allotment in Lake Mead as part of a multiple state and water district pledge, 500,000 to get morning feet. The contributions of the two tribes made Arizona’s contribution to the effort possible.

The Colorado River Tribal Roundtable, an initiative of the Inter Tribal Council, signed an agreement with the Bureau of Reclamation in March that created a platform for the council’s 21 tribal members to speak directly to the office on matters related to the management of the Colorado River .

“It was really like a handshake on paper to say we are going to work together,” said Dadgar. The Tribal Leaders Water Policy Council, a long-standing group of the Inter Tribal Council, will lead the collaboration.

While some tribes like the Gila River Indian Community and the Colorado River Indian Tribes look forward to playing a leadership role in river management, others are still struggling to cement their own water rights.

Shaun Chapoose, chairman of the Ute Indian Tribe of the Uintah and Ouray, led a delegation of tribal officials to campaign for these rights. The Upper Basin tribe of northeast Utah has been fighting for water since the creation of their 4.2 million acre reserve, the second largest in the United States, in 1861.

But he and other tribal officials at the conference said that both the Utah government and the U.S. government had for decades hampered their ability to claim their water rights and use the water for the benefit of the nearly 2,100 members of the tribe. Tribal officials cited several examples, including drawing water from the trunk to fill the Flaming Gorge Reservoir in the mid-20th century.

The tribe held a referendum in 2018 to codify its own water law, but it was rejected by the Bureau of Indian Affairs, said Emmett Duncan, assistant director of tribal administration.

“We have a complicated history with water rights,” said Chapoose.

The Ute Indian Tribe is a member of the Ten Tribes Partnership.

Take steps:One tribe tries to offer water for lease, another tries to save more

Another tribe that has long tried to quantify their water is the Navajo Nation. The tribe with the largest land base in the U.S. has been trying for decades to claim its fair share of water and is currently in litigation.

Stanley Pollack, a water law attorney who worked for the Navajo Nation before retiring in October, said the situation in the nation was grave.

“About 40% of the Navajos have to haul their water,” he said.

The widespread lack of access to public water supplies hit the COVID-19 outbreak hard. People couldn’t wash their hands properly, which encouraged the virus to spread. And although the nation lies almost entirely in both the Upper and Lower Basins, he said, the special master in the landmark Arizona v California case, who confirmed that current rivers’ allocations did not accord primary rights to the nation of more than 300,000 members.

This resulted in numerous and ongoing efforts to acquire water rights and build the infrastructure to provide water to the dispersed communities within the 17.5 million hectare reserve.

On the other side of Arizona, the Colorado River Indian tribes will fallow enough of their fields to contribute 50,000 acre-feet to keep Lake Mead levels high enough to prevent further scarcity. But tribal people want to keep farming, said vice chairman Dwight Lomayesva.

“We are doing our part to save the river,” said Lomayesva, “not just because it is important, but because the river is sacred to us.”

Debra Krol reports on indigenous communities at the confluence of climate, culture and trade in Arizona and Intermountain West. Contact Krol at [email protected] Follow her on Twitter at @debkrol.

The reporting on indigenous topics at the interface of climate, culture and trade is supported by the Catena Foundation.