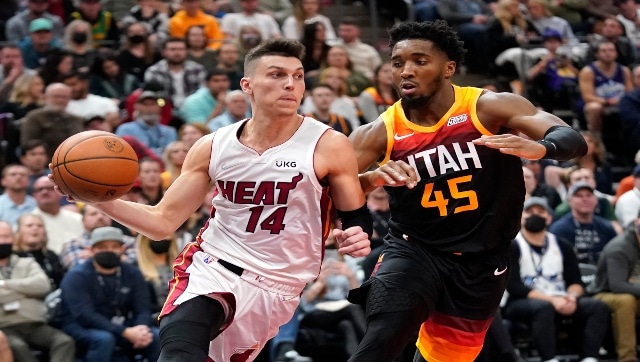 Tyler Herro ignited the offense of the Heat with 27 points and eight rebounds in front of 18,300 spectators in the Vivint Arena

Los Angeles, USA: The Miami Heat lost three games and won the season streak against Utah with a 111-105 NBA win over Jazz in Salt Lake City on Saturday.

Tyler Herro ignited the offense of the Heat with 27 points and eight rebounds in front of 18,300 spectators in the Vivint Arena.

Duncan Robinson scored 22 points adding three points to a half-dozen and Kyle Lowry finished at 21 for the heat.

Bojan Bogdanovic scored 19 of his 26 points in the fourth quarter and led the Jazz, who lost for the fourth time in their last five games.

The two teams will only meet twice this season. Miami also won the first meeting 118-115 on November 6 in Florida.

Miami took the lead 23-7 in the first quarter thanks to solid three-point shots from Robinson and Bam Adebayo.

Clarkson carried the Jazz on his back to cut the deficit and scored 11 straight points in just 76 seconds to reduce the lead to 27:24.

The Heat even led by 27 points in the second half before the Jazz used another late rally to pull within 109-105 with 14 seconds remaining in the fourth quarter.

But four seconds later Herro made two more free throws to thwart the victory for the Heat.