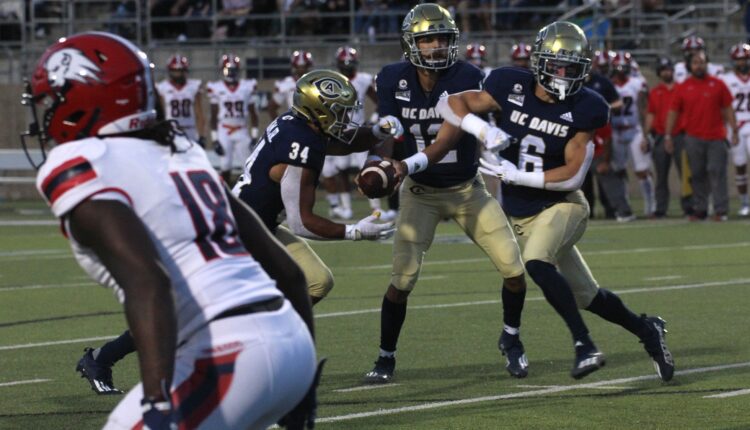 UC Davis football off to a fast start

“I like to start fast and finish strong,” said Dan Hawkins, UC Davis head coach, after the Aggies did just that in a 60-27 beating Dixie State last Saturday night at UC Davis Health Stadium.

The Aggies, now 3-0 and in 10th place in the current FCS trainer survey and 12th in the Stats-FCS survey, quickly started with a 15-0 lead in the first quarter and ended strongly with a 21: 0 quarter-finals.
Quarter blast to bury the overwhelmed trail blazers.

However, all of this is now in the rearview mirror as the Aggies prepare to play their eight-game Big Sky Conference plan against four-time defending champions and # 14/15 Weber State on Saturday at 5 p.m. PDT at Stewart Stadium to open on the WSU campus in Ogden.

Weber State is 1-2 after falling to numbers 2/3 James Madison last Saturday at 37-24. The Wildcats trailed 37-10 and went into the fourth quarter but got two late results to make the end result a little more respectable.

For a moment, however, Hawkins wanted to reflect on the electrifying atmosphere of the sold-out home game against Dixie State last Saturday at his weekly press conference on Tuesday.

“That was magic in the stadium,” said the Aggie coach. “I want our guys to take stock of what happened and appreciate it all and then go back to work. To be honest, it doesn’t surprise us that we’re 3-0, but even if we were 1-2, our task and focus would be the same. The culture here is great and we just want to be the best version of ourselves every week. “

The Big Sky News was produced by Northern Arizona traveling to Tucson last Saturday and baffling Pac-12’s University of Arizona, 21-19.

This marked Big Sky’s third win over an FBS school this season, following UCD’s 19-7 win over Tulsa and Montana’s 13-7 win over Washington.

The Aggies miss out on both Montana and Montana State during the regular season of Big Sky’s insane four-year round-robin schedule that seeks to strike a competitive balance in the 13-team league.

However, they play Weber State this weekend and Eastern Washington in Davis on November 13, which is possibly the game of the year on Big Sky.

The Aggies have lost the last five games against Weber State and stand 2-6 in total against the Wildcats. UCD is 0-9 all time against East Washington so the path ahead is anything but
simple.

Speaking of East Washington, in one of the wildest games of this young season, the Eagles took a 55:21 half-time advantage over Western Illinois and then held on to secure a 62:56 win to make it 3-0.

EMU quarterback Eric Barriere for Everything was honored with Big Sky Offensive Player of the Week after throwing 542 yards and six touchdowns, with an FCS record of 487 those yards
comes in the first half.

And speaking of amazing feats, the Special Teams Player of the Week award went to Northern Arizona’s DJ Arnson, who averaged 51.6 yards per punt on nine attempts, including a 62-yarder who was Arizona late in the game pinned deep in its own territory.

Despite dropping Cal a 42-30 decision, Sacramento State appears to have found a quarterback in Jake Duniway who holed the Golden Bears for 370 yards in the air and a few points.