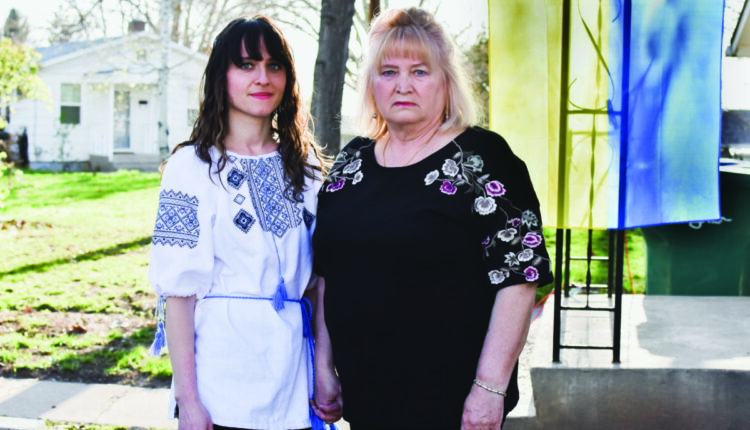 Erica, left, and Yana Berger stand in front of the flag of Ukraine at their Ogden home.

Erica Berger in a home in Ukraine.

Yana Berger near a tree in Ukraine.

Erica, left, and Yana Berger stand in front of the flag of Ukraine at their Ogden home.

Erica Berger in a home in Ukraine.

Yana Berger near a tree in Ukraine.

Yana Berger, a retired nurse technician, and her daughter Erica Berger, a third grade teacher at DaVinci Academy, were born in what is now western Ukraine. They moved to the United States two years before the collapse of the Soviet Union. Yana describes life in the Soviet Union, saying “it was very difficult. You would go to the store to wait in big lines for food. You could be waiting in line and suddenly, right before your turn, they would run out. Every store was empty. That is one of the reasons we decided to leave the Soviet Union.”

After living in New York and working in a hospital, Yana returned to Ukraine in 2009, after it was declared a sovereign country. She describes a dramatically different place than what she left. “When I returned, it was an independent Ukraine. There were buildings, you could go to meetings, you could talk forever; it was pretty much freedom.” Yana would go back and forth from the United States and Ukraine, working in the US while still maintaining her life in Ukraine.

Erica describes the things she loves about Ukraine, sharing an admiration of the Carpathian Mountains, the rich forests and the Ukrainian peoples’ appreciation of the land they live on. Erica remembers walking with her mother, who would describe the plants to her and let her know what was edible or not. They would go mushroom hunting and have picnics in the backyard.

In August 2021, Yana Berger decided to sell her home in Ukraine and move to Ogden to be with her daughter. They shared a trip to their hometown of Mukachevo just before the move and were welcomed with love by friends and family. “They don’t have a lot of money, but they give you everything. No matter where we went, no matter who we visited, they want to make others feel welcome, invited, loved and cared for,” Erica said.

Today, Yana and Erica Berger grieve the devastation of the war in Ukraine from Utah, while their family members are still there living through it. Yana and Erica have received pictures of long-time friends sewing military uniforms and videos of their community at church with sirens blaring in the background. “Homes people worked their whole lives for are just gone,” Erica said.

They are both heartbroken at the atrocities they see on the news. “Everybody is crying every day,” said Yana. “We never hate anybody. We never take from anybody. We just want to live in peace.”

Yana and Erica are doing everything they can to help. They have been sending money to family members, friends and neighbors in Ukraine who get the ingredients to make bread and purchase necessities. The recipients share what they receive and send food and supplies to Yana’s nephew, who is serving in the war with the Ukrainian military. He disperses it amongst his comrades and the community.

Before accepting donations, they sent almost $3,000 of their own money to help the people of Ukraine directly. They explain that because of the bombing of a key mail-retrieval city, packages they’ve sent have not been arriving in Ukraine. Yana explains that for this reason, digitally sending money is the best way to help. “I send money straight to their hands. I get an email when they get it.”

Erica agrees that wiring funds is the best thing people can do for the people in Ukraine, but also notes that there are things the people of Ogden can do to support their own Ukrainian neighbors. She expresses that seeing Ukrainian flags in yards, yellow and blue pins on shirts, or hearing a reminder that the members of the community stand in solidarity with her and her mother is meaningful. She said, “Maybe they are thinking that it is a small gesture that doesn’t make a difference, but it does. It improves morale and lets us know we are supported. We always take pictures when we see something in support of Ukraine and send it to our families back home.” Yana adds that it also helps bring awareness to others who may not know about the war in Ukraine.

“Ukraine not only stands for Ukraine; they stand for the whole world. They are a shield. Ukrainians are very strong people. They are sacrificing their lives. They are dying too young. Some are going empty handed to stop tanks. All of them are heroes,” Yana Berger said.

To show support to Yana, Erica and other community members being impacted by the war, yellow and blue ribbons will be available to hang in trees. You can find ribbons in the following places beginning May 2: Lavender Vinyl, The Art Box, The Bonneville and Grounds for Coffee on 25th street.

Monster Jam to roar into Salt Lake City this weekend