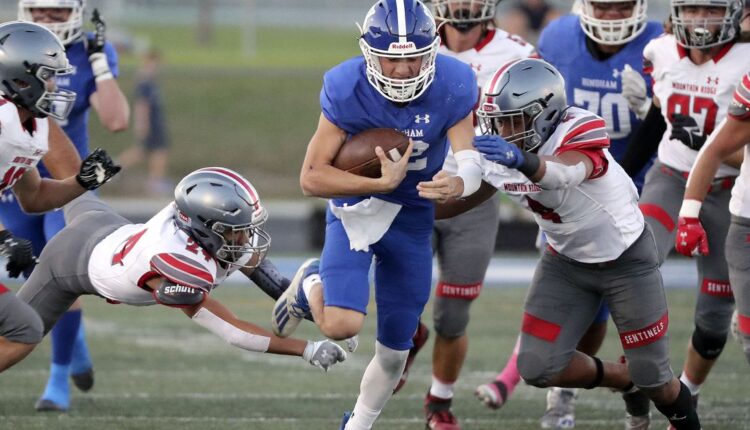 Here’s a complete roundup of Friday’s Week 7 high school football action from around the state.

Despite trailing win the second quarter, Layton Christian rallied to defeat North Summit. The Eagles scored 19 unanswered points, powered by Malik Johnson who had a touchdown reception and an interception return for a touchdown.

In an absolutely wild finish, Enterprise came away with the 1-point win. North Sevier scored with 35 seconds remaining to take a 26-21 lead, but just 14 seconds later, Matthew Ramos connected with Clayton Anzalone for a 72-yard touchdown and Enterprise got the victory. That marked the second time those two combined for a score in the win.

Duchesne scored 52 points in the first half as it cruised to a win. Parker Crum threw three touchdowns and rushed for another.

Syracuse scored two touchdowns in the second quarter, added a field goal in the third and pitched a shutout defensively for the win. Jake Hopkins threw both of the touchdowns for the Titans.

Weber scored 14 points in the fourth quarter to complete the comeback win. Jake Lindsay had a 9-yard touchdown run, then Stockton Short hauled in a 73-yard pass from Lindsay for the game winner.

Kanab made short work of Gunnison Valley, scoring 41 of its 48 points before the Bulldogs got on the board. The Cowboys did their work on the ground, rushing for seven touchdowns, including 77 and 73 yard touchdown runs by Travis Stewart.

Trey Talbot scored a 12-yard touchdown in the bottom half of overtime to win the game for Davis. Talbot forced overtime with two seconds left in regulation, when he caught a touchdown pass from Jackson Stevens.

Emery made short work of Judge Memorial, scoring early and often. The Spartans 28 points in the first quarter, en route to 35 unanswered points to open the game. It was a balanced effort by Emery, which scored through the air five times and on the ground three times.

The Kearns rushing attack ran all over the Hunter defense while its own defense held the Wolverines to just a lone field goal on the night as the Cougars secured the Region 2 victory. Tailback Naki Leha finished the game with a rushing touchdown hat trick.

West did all of its scoring in the first two quarters, scoring 21 points each quarter in the first half. Isaiah SueSue threw two touchdown passes for the Panthers.

Quarterback Jace Palmer and the San Juan offense were hot on the evening, while the Broncos’ defense limited Millard to just a garbage-time touchdown as they picked up another 2A South victory. Palmer finished the game with four touchdown passes.

In a close game throughout, Granger did just enough to hold off Cyprus. The Lancers used a balanced scoring attack to get the victory.

Delta scored 34 points in the first quarter and cruised to the win. Josh Jackson rushed for four touchdowns and Ryder Rogers accounted for the other two for the Rabbits.

Powered by a dominant rushing attack, Beaver handily defeated Grand. The Beavers scored five rushing touchdowns, led by Statler Wright, who rushed for a pair of scores. Wright also recorded a touchdown reception, one of three touchdown passes thrown by quarterback Tyten Fails. Beaver never trailed and scored at least a touchdown in every quarter.

Dallen Martinez threw for a touchdowns and ran 80 yards for another and Saia Lomu had two rushing touchdowns as Bingham beat Mountain Ridge.

Trailing early Manti rallied to defeat Canyon View. The Templars trailed 7-0 after the first quarter, but outscored the Falcons 32-0 the rest of the way. Reggie Frischknecht scored three touchdowns to lead the way for Manti.

After a scoreless first quarter, Richfield 30 unanswered points, rolling to a runaway win over Carbon. Reggie Hafen threw a pair of touchdown passes and Jaron Ross rushed for two scores to lead the way for the Wildcats.

Dallas Larson rushed for four touchdowns to lead six Soaring Eagle players with rushing scores in Juan Diego to a convincing win over Union. Juan Diego never trailed, and scored a combined 43 points in the second and third quarters to put the game against Union away.

West Jordan reeled off 19 straight points as the Jaguars beat Herriman. Boston Farmer threw a touchdown pass to Carter Baldwin and ran for a score himself.

In a battle that saw no points scored in the first half, Grantsville did just enough in the second half to get the win. Blake Thomas broke free for a 65-yard run in the third quarter and Trevor Tuckett added a 21-yard field goal in the fourth for some cushion as the defense pitched a shutout.

Juan made short work of North Sanpete, outscoring the Hawks 27-6 in the first half, before running away with the victory. Wesley Nielsen rushed for three touchdowns to lead the way for Juab, while Chase Ingram added two rushing scores of his own, including a game-long 60-yard score.

Lone Peak outscored American Fork 12-0 in the middle two quarters and then held off the Cavemen in the fourth for the win. Easton Comer threw for two touchdowns and Luke Durfey ran for two more for the winners.

In a matchup between the state’s top ranked teams, Skyridge looked like it would challenge the Chargers as it carried the lead into the second quarter, but the Falcons couldn’t keep the reigning 6A champions at bay. Corner Canyon scored 21 unanswered points and didn’t look back to keep its winning streak alive. Chargers’ receiver Jett Meine, who finished with two deep touchdowns and 200-plus receiving yards, couldn’t be covered by the Skyridge secondary.

Bonneville scored two touchdowns in both the first and second quarters and cruised to the win. Koy Dixon threw for three touchdowns and ran for the Lakers’ other two in the victory.

The Knights used a big second quarter to separate themselves from Viewmont and secure the Region 5 victory. Northridge QB Maximus Fonoti-Maikui finished with five total touchdowns (four passing and one rushing), two of which were thrown to receiver Josh Acord.

Skyline scored at least one touchdown in each quarter but put up three in the second as it pulled away from Murray. Alexander Emery threw three of the touchdowns and ran for another for the Eagles.

The Miners went on the road to Olympus and racked up another Region 6 victory. Park City running back Carson Tabaracci scored two touchdowns and his brother, Blake, capped off the game’s scoring with a 65-yard score of his own.

Stansbury jumped out to a 20-point lead in the first quarter and then used a strong fourth to finish things off for the win. Nate Bushnell led the way with four rushing touchdowns on the night. Easton Schank threw three for Cedar Valley in the loss.

The Buffaloes made short work of the Bruins, winning decisively. Tooele scored a touchdown in every quarter, led by Mapa Vaenuku, who rushed for three touchdowns, including a game-long 55 scoring run. Gabe Medina had Tooele’s only touchdown reception, an 84-yard score.

Timpanogos held a two-touchdown lead after the first quarter and broke things wide open in the second. On a night when a bunch of players got involved for the winning side, Jaxon Vanchiere led the way with three touchdown catches.

Payson wasted little time taking down Hillcrest. The Lions outscored the Huskies 14-0 in the first quarter, 28-0 in the first half, before Hillcrest managed to get into the end zone in the third period. Payson was balanced in its attack, rushing and passes for three scores. Kelton Smith rushed for two touchdowns to lead the Lions, including a game-long 50-yard scamper.

Lehi jumped out to a big lead and cruised to the win. Jackson Brousseau led the way with five touchdown passes.

Banks Jackson’s nine-yard touchdown run ended up being the difference in the game for Maple Mountain as it edged Salem Hills.

Daniel Asisi had the play of the game, returning a blocked kick 80 yards for a touchdown in Provo’s win. Feitagai Lesa had an eight-yard touchdown run that put the Bulldogs on top for good in the fourth quarter.

Down 24-22 heading into the fourth quarter, Springville scored 23 points in those final 12 minutes and held Wasatch scoreless to get the win. Ryder Burton threw for three touchdown passes — two to Brady Mortensen and one to Cole Clement — and Seth Rigtrup ran for three more in the win.

Jed Harris threw a 12-yard touchdown pass to Tristin John with 58 seconds left in the game for the game-winning touchdown for Desert Hills.

Crimson Cliffs did what in wanted against Hurricane, rolling to an easy victory. Easton Droubay and Gunner Orr each rushed for a pair of touchdowns to lead the way, and were responsible for the first four touchdowns in the game. Crimson Cliffs scored at least a touchdown in every quarter.

Led by quarterback Seth Takau, Dixie dominated Cedar City. Takau threw three touchdown passes and rushed for another score. Bode Ray kicked off the scoring with an interception return for a touchdown.

Led by the scoring efforts of six different Wolves, Green Canyon defeated Bear River. Gavin Christensen kicked off the scoring with a six yard touchdown run, while Brody Hamann had the play of the game with a 28-yard interception return for a touchdown.

Caden Reyonds ran for a touchdown and caught a touchdown in Farmington’s win, the latter proving pivotal as it ended up being the game-winning score.

Timpview exploded for a 41-point second quarter as it beat Highland by 40 points. Paka Haunga led the T-Birds with three rushing touchdowns.