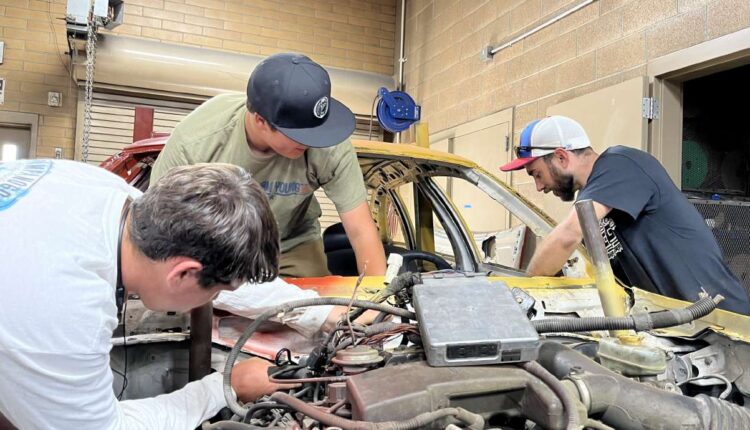 Utah mechanic excites students by preparing them for demolition derby

SPANISH FORK — For some students, summer break wasn’t much of a break.

However, Sam Berky knew if the car he and his classmates were working on was going to be ready for the big demolition derby next week, they couldn’t take too many days off.

“It’s just getting in there and getting your hands all dirty,” said Berky, who will be a junior at Maple Mountain High School this fall.

Berky and his Maple Mountain High School classmates spent the summer learning all about cars.

It turns out, he really likes it.

“When something comes in and it’s broken, and then you tear it apart, fix it and, and put it back together and you see the end result, it’s like, yes!” said Berky.

For Tyler Warner, hearing Berky’s excitement is better than any finely tuned engine could ever sound. It gives him hope for the future.

Warner is a mechanic and owns WNR Mobile, which is his own diesel repair business. He says he has seen how his trade isn’t as popular for kids as it used to be.

“The mechanics field is getting shorter and shorter. There’s more and more work needed and fewer people to do it. Like, we’re losing people all the time,” said Warner. “I don’t want to see everybody going into electronics or computers or sitting at home playing video games. They need something else to go into. We need mechanics.”

He even offered to donate cars for kids to learn on. Four high schools signed up — Maple Mountain, Payson, Provo, and Salem ALC.

Some classmates from Maple Mountain High School in Spanish Fork spent the summer learning all about cars. Mechanic Tyler Warner donated cars for them to work on, which will be part of a demolition derby Aug. 13. (Photo: Carissa Hutchinson, KSL-TV)

“It has been a lot of time and it’s been a lot out of pocket, but we made it work,” said Warner. “It’s been worth it.”

The cars the students are working on will be part of a demolition derby on Aug. 13 at the Juab County Fairgrounds.

It will be high school vs. high school, smashing into each other in a way the football teams could never do.

“Yeah, that’s going to be a lot of fun to win that,” said Maple Mountain High School senior Seth Lai. “We worked hard to get to this point. All the high schools did, and it will be fun to go up against each other.”

Some classmates from Maple Mountain High School in Spanish Fork spent the summer learning all about cars. Mechanic Tyler Warner donated cars for them to work on, which will be part of a demolition derby Aug. 13. (Photo: Carissa Hutchinson, KSL-TV)

At the same time, these students are learning a skill that could lead to a long career they may have never thought of.

“Yeah. Not everybody can be an entrepreneur,” Berky said with a laugh. “I really like doing this kind of stuff.”