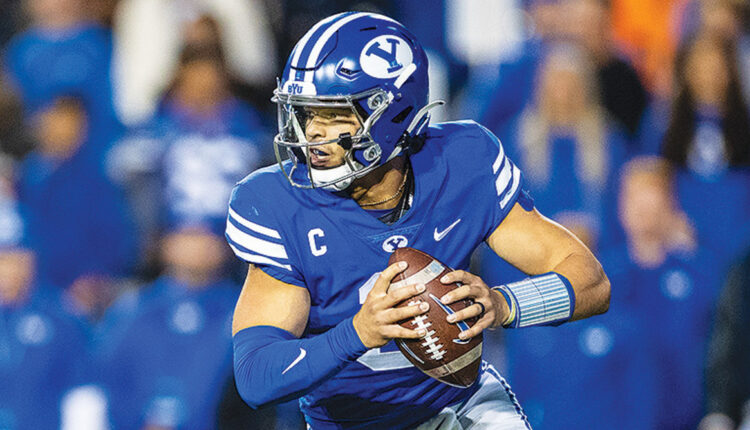 Utah State vs. BYU Prediction: The Old Wagon Wheel on the Line in Provo on Thursday Night – AthlonSports.com

Utah State and BYU renew a fierce rivalry when the two teams clash in the Battle for the Old Wagon Wheel on Thursday.

the no 19 Cougars (3-1) currently possess the Old Wagon Wheel after taking two straight in the series. BYU is facing a Mountain West opponent for the second time in a five-day span after beating Wyoming 38-24 on Saturday. It took a while for the Cougars to get going against the Cowboys, but they pulled away after halftime. BYU rolled up 526 total yards and averaged 8.3 yards per play.

The Aggies (1-3, 0-1 MW) enter the game mired in a three-game losing streak. Utah State finally scored an offensive touchdown for the first time since its season opener in a 34-24 loss to UNLV but could not overcome a spate of turnovers. The Aggies had five interceptions and lost a fumble against the Rebels and also set up a short touchdown with a special teams mistake. Utah State also tallied 11 penalties for the third consecutive game.

When Utah State Has the Ball

Ugly is the most apt description of Utah State’s offense subsequent to a season-opening 31-20 win over UConn. The Aggies have undone themselves over and over again with penalties and turnovers and have suffered embarrassing losses in the process.

It starts with erratic play from quarterback Logan Bonner. The senior has thrown eight interceptions over his last two games. Bonner did finish with 313 yards and three touchdowns on 66 percent passing against UNLV. But his five interceptions cost the Aggies a shot in a winnable game. Bonner has completed just 56.4 percent of his passes this season and fared even worse (less than 40 percent) in back-to-back weeks against Alabama and FCS Weber State.

A lack of a consistent running attack is only enhancing the pressure on Bonner. Calvin Tyler, Jr. piled up 161 yards on 33 carries against UConn. Tyler totaled just 131 yards on 45 attempts over Utah State’s last three games. Robert Briggs has 82 yards on 19 carries in the same stretch. The Aggies will need one or the other to break out against BYU to keep the Cougars from keying on Bonner and forcing him into one bad throw after another.

When BYU Has the Ball

Jaren Hall is coming off one of the finest performances of his career to date. Hall threw for a season-high 337 yards and had four touchdown passes against Wyoming. He finished with a 211.0 passer rating and completed a career-high 81.3percent of his attempts. Slowing Hall down will be a chore. The redshirt junior has put up at least 250 passing yards in eight straight and 10 of his last 11 games.

Even with some key receivers sidelined, Hall still made things happen. Keanu Hill stepped up with a career-high 160 yards and two touchdowns on five receptions. Brayden Cosper added a career-high 58 yards and a touchdown on four catches. BYU can use another big game from them with Gunner Romney still not at 100 percent and Puka Nacua re-injuring his ankle.

BYU has Chris Brooks, Lopini Katoa, and Miles Davis listed as co-starters in the backfield this week. Davis injected some life into the previously stagnant running attack with a career-high 131 yards on 13 carries against the Cowboys. Brooks, the primary back in the previous three games, was limited to two carries for 10 yards against Wyoming. Head coach Kalani Sitake plans to take a by-committee approach for now and ride with whichever back has the hot hand.

This is the final scheduled game in this century-old rivalry. Four previously scheduled games from 2023 to 2026 were scrubbed when BYU opted out of the contract while clearing future schedules ahead of a move to the Big 12 next year. The Cougars are in an excellent position to close out the series with a resounding victory. Utah State has slipped badly on offense from a season ago and likely faces an uphill climb to make a bowl at this point.

– Written by John Coon, who is part of the Athlon Contributor Network and a sports journalist based in Utah. Follow him on Twitter @johncoonsports.

*Price as of publication.