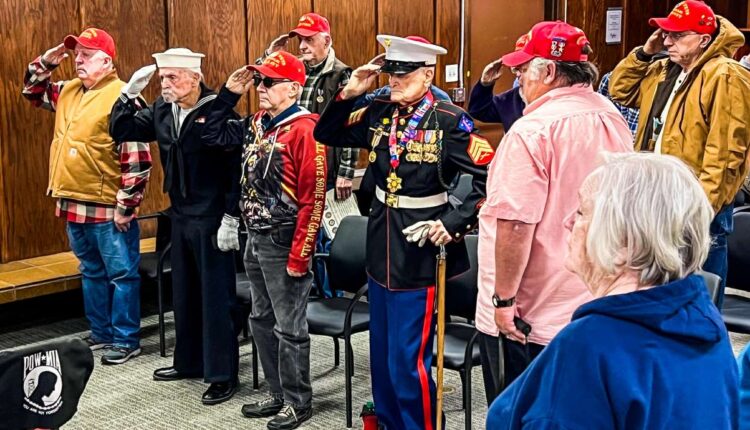 Utah Cold War veterans greet each other during an awards ceremony Wednesday at the Golden Hours Senior Center in Ogden. (Ogden City)

OGDEN – Decades after their military service, a handful of Ogden veterans have been commended for their sacrifice.

On Wednesday, 10 veterans were awarded their Utah Cold War victory medals at a ceremony held at the Golden Hours Senior Center in Ogden. According to a press release from Ogden, the medal is in recognition of those who served in the armed forces during the Cold War.

Those honored on Wednesday served between 1945 and 1991 and spent time in Minuteman ballistic missile locations or in other countries such as Vietnam, Germany and Korea. Larry Kerr, an Air Force veteran who served 20 years in the Vietnam War and Korea, presented the medals.

“We feel privileged to be able to host this amazing pinning ceremony for our honorable veterans,” said Ginger Meyers, Ogden Recreational Officer, in a press release.

Prior to a 2017 bill, Cold War veterans did not have a medal of service because the ordeal was an undeclared confrontation. Since then, funding for the medals has been dependent on donations to the Utah Cold War Veterans Foundation, which has since funded the service medals.

In 2018, 100 Utah Cold War Veterans received the Medal of Merit during a ceremony at the George E. Wahlen Ogden Veterans Home. Approximately 100,000 Utahners served in the armed forces during the Cold War, according to previous KSL.com reports.