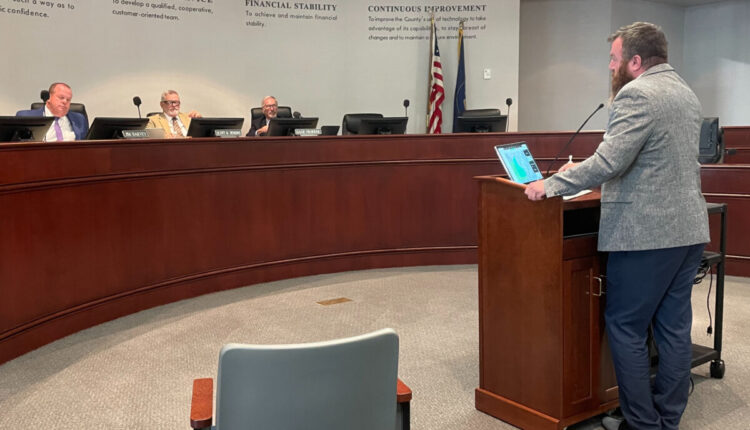 OGDEN — Plans for the Nordic Valley ski village are morphing into response to concerns raised by neighbors, but they’re edging forward.

Weber County commissioners on Tuesday approved a number of changes to the land-use code in the Ogden Valley, sought by Skyline Mountain Base, which owns the Nordic Valley ski resort and is pursuing the plans. The changes — revised and adjusted from earlier proposals — will allow for the sort of development Skyline reps seek, factoring concerns voiced by the public.

Soon will come a request for a zoning change by Skyline based on the updated codes, perhaps in September, according to Laurent Jouffray, a member of the Skyline Mountain Base board and a resident of the Liberty area. Ahead of that, next Monday, Skyline officials are hosting an open house at the Ogden Valley Branch library in Huntsville starting at 6 pm to provide the public with the latest info on the plans.

The plans — calling for perhaps 500 housing units radiating from the base of the Nordic Valley ski operation — could have advanced without the new code language, Jouffray said.

But the change “gives a framework, including architectural guidelines, designs and urban guidelines, that are for the benefit of the area,” he went on. “In other words, it creates constraints for the developer but it allows, at the same time, a much better outcome in terms of design than the previous ordinances. ”

The ski village proposal prompted alarm among some who live in the Eden area, home to Nordic Valley and the Powder Mountain ski resorts, worried about overdevelopment and the loss of the area’s outdoor charms. Notably, though, the footprint of the proposed village has been reduced to cover just the area that’s the focus of Skyline’s plans, to the relief of neighbors, said Bruce Magill, one of several residents of the area who has spoken out.

With the changes, the plans are “not as bad,” he said. “There are still issues.”

Among other changes to the plans, said Jouffray, are opening of Nordic Valley land to neighbors, giving them access to trails on adjacent US Forest Service land, and limits on the height of proposed buildings so neighbors’ views aren’t obstructed. The number of housing units has been reduced from more than 700 to 500 or so, although the figure doesn’t include hotel rooms, and the developers will comply with dark sky guidelines.

“We have made many adjustments to the original plans after listening to our neighbors and to the commissioners,” Jouffray said. What’s more, the plans, by shifting development rights from other areas around Nordic Valley to the base of the resort, will forestall development on some 350 acres of land.

Commissioners voted 2-0 on Tuesday in favor of the code changes, with Commissioner Gage Froerer recusing himself. Froerer is a partner in Nordic Valley Land Associates, which owns a portion of the land that’s within the development area envisioned by Skyline, and he opted not to vote to avoid a potential conflict of interest or the appearance of a conflict.

He’s been involved in the trust that owns the land for 20 or so years but has had nothing to do with Skyline’s plans. “The development was driven by the ski resort and Skyline people,” he said after Tuesday’s meeting.

The land owned by Nordic Valley Land Associates, Froerer went on, may or may not end up within the Skyline proposal. “I do not know. It’s not my decision,” he said.

Through it all, some have wondered if Skyline can secure the water rights needed to create the village it envisions. “We’re not the water authority in the valley. Whether it’s this developer or any other developer, they need to bring the water with them,” said Commissioner Jim Harvey, addressing the issue.