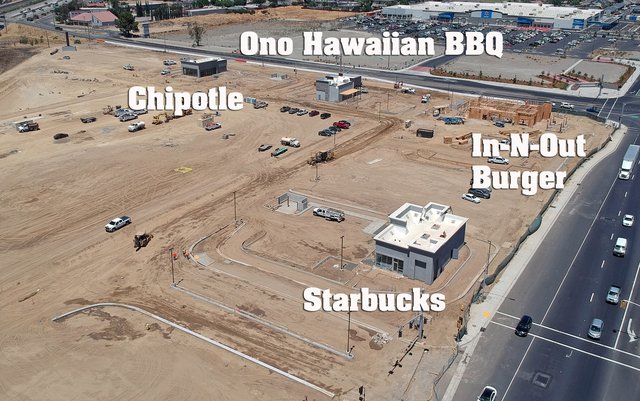 What is going where in the new shopping center

Before the end of the year comes, there will be a lot more places to spend your money.

The Ceres Gateway Center is quickly taking form with four buildings framed and wrapped and more underground work for other new businesses.

Site work began in December on the 13.65-acre Gateway Center which will bring In-N-Out Burger, Chipotle, Ono Hawaiian BBQ, a Quick Quack Car Wash and a third Starbucks to Ceres. Phase 2 of the center is expected to bring three junior anchors and a motel to the triangle-shaped center east of Highway 99.

Quick Quick Car Wash received unanimous approval in March to build at the northwestern most corner of the triangle-shaped commercial center and closest to the Service Road overpass.

To help readers understand what businesses are going into the buildings that are up, we sent up a drone to get an aerial view.

The building at upper left will be the Chipotle, a first for Ceres.

A little east and immediately south of the Service Road access to the Walmart Supercenter will be an Ono Hawaiian BBQ restaurant. It will take the place of what was originally intended to be a Panda Express restaurant. It will consist of 2,192 square feet and include a drive-thru.

An In-N-Out Burger will be constructed at the very corner of the intersection. A large sign is announcing that the company is looking to hire employees for the store starting at $17 per hour and allowing them to make up to $20.50 per hour. Applications are being taken at In-N-Out.com/grandopenings

Lastly, the building adjacent to the future Mitchell Road driveway into and out of the center is a Starbucks – the third one for Ceres.

The list of tenants has changed slightly since the center’s approval. A Circle K at the southern tip of the project has been dropped in favor of a Union 76 gas station.

An undisclosed hotel chain is looking to build a 64,000-square-foot four-story hotel of 80 rooms. It would be located on a new 2.14-acre commercial lot created by a parcel split approached this month by the Ceres Planning Commission. The hotel is tentatively planned to backup to Highway 99. No specific hotels have been named.

In May the Ceres City Council voted to increase the maximum allowable height of buildings from 35 feet to 50 feet to accommodate a four-story hotel in the Regional Commercial zone.

A 4.61-acre parcel has been aside for three junior anchor tenants.

In the first public hearing held Monday evening, the Commission approved a Tentative Parcel Map to subdivide Parcel 7 of the project into two commercial zoned lots. The 1.8-acre parcel at the southern tip of the center will be subdivided into two separate commercial lots to facilitate the development of two future businesses instead of one. The proponent suggested one use could be a drive-thru restaurant while the second would accommodate a Union 76 gas station with convenience store use and an additional tenant space with a drive-thru.

In 2008 the city approved the Gateway project as proposed by Ralph Ogden. The project stalled after the economy hit the skids that year. Multiple extensions were granted but the approval for the project expired in 2012. The center was redesigned and brought back in 2020 by Ralph’s son, Daniel Ogden.

To Stem the Spread of Monkeypox, Health Departments Tap Into Networks of Those Most at Risk

Page not found – The Daily Universe