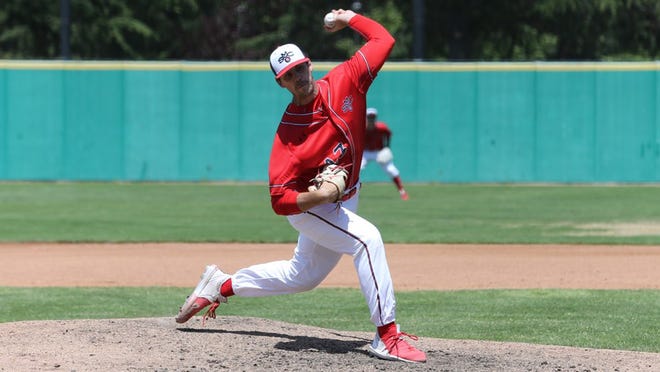 Shelly Smith and her family did not live long in St. George. In fact, she said it only took them 18 months to move north.

But those 18 months had a special impact on her son, Ky Bush.

Bush was drafted in the second round by the Los Angeles Angels with the 45th overall selection after an outstanding career in college baseball. Following this success and Bush’s professional baseball career, Smith would like to personally thank St. George and the baseball community.

That community started Bush on his way to becoming an MLB draft pick and becoming a professional baseball player.

“The people who connected us and brought us into the baseball world just wanted to reach out to us and just thank them,” said Smith. “The journey began in St. George.”

This journey started off a little convincingly.

The coaches told her it was a classic case of overzealous parents who believed their child was better than it actually was and said Bush shouldn’t play.

That was until Bush went to trial training with his brother.

During the trial session, the coaches asked Smith why Bush wasn’t wearing a number. She remembered the conversation and said he was denied the chance to act out. The Dixie Little League coaches quickly changed their minds when they saw Bush warm up with his brother for a trial session.

At the auditions, Bush caught the attention of the baseball community and had college coaches tell him that he had the potential to play college baseball one day. Not long after, Bush proved that he was a gifted talent and played alongside some talented players.

“It’s such a baseball community,” said Smith. “We just developed a love for the game.”

However, Smith said the parts Bush remembers most about his time in St. George were when he could be a child.

Smith said Bush and about six other kids in the neighborhood played Whiffle Ball for hours. Even when Smith moved her family to Santa Clara, Bush found another group of neighbors to play whifle ball with for hours.

These included Snow Canyon baseball coach Reed Secrist and the sons of assistant coach Lance Rigby, who were also allowed to coach Bush as a young player.

“My boys will tell you that the best memories they have are hours of playing Whiffle Ball,” said Smith. “They played with their friends in St. George and just as a kid you can do it all year round.”

But Bush grew up and became an outstanding baseball player. He was drafted in the 40th round of the 2018 MLB Draft by the Kansas City Royals, who dropped out of high school in 2018, but chose to play college baseball.

He first played in Washington State, but had a difficult newcomer season. Bush moved to Central Arizona College before making one final move to St. Mary’s College, where he built his design inventory.

Even in the toughest of times, Smith said, baseball was the constant helping her son grow into a motivated athlete. These adversities never stopped Bush from becoming the player who would one day play professional baseball, continuing the journey he began in St. George.

Smith got emotional remembering some of the troubles her family faced all those years ago which caused them to move to northern Utah instead of staying in St. George.

But the relationships the family forged in southern Utah have never faded. In fact, Smith said these relationships were some of the strongest she’s ever had, and they started out with baseball in St. George.

“Our friends in St. George, and especially those closest to us, have seen some of our trials and helped us through those trials,” said Smith. “You were always just a source of strength for us.”

Bush reportedly signed a $ 1.75 million deal with the Angels on Friday, slightly higher than what some of the 45th overall could expect.

When Smith dropped her son off to report to the Angels, the experience came back, reminding them how surreal it was that Ky Bush is now an MLB pitcher. This next step in his journey had to start somewhere.

“We’re just so grateful to the St. George community,” she said. “We just want the community to know that we love them and that we appreciate the things and the lessons and the friendships we learned during our time there.”

Chris Kwiecinski covers Region 9, Dixie State, and Southern Utah track and field for The Spectrum. Follow him on Twitter @OchoK_ and contact him at [email protected] or (435) 414-3261.