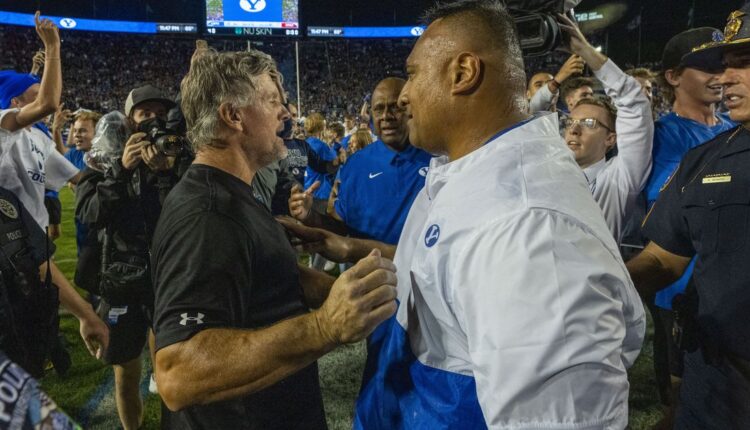 Why Utah’s season after losing to BYU. is not over yet

The TribUte is a weekly newsletter about Utah athletics. Subscribe here.

Contrary to what the Anger Twitter faction would have the University of Utah fan base believe, the sky didn’t go down after the Utes were solidly defeated at BYU on Saturday.

I’ve spent a lot of time this week writing and talking about the offensive line, the defensive line, what went wrong, what needs fixing, Charlie Brewer’s game, etc., but one thing I haven’t really touched on yet , that has to be said out loud.

The only thing that is guaranteed on Saturday is that Utah will not get into the college football playoffs because it will no longer be able to run on the table and stand as the undefeated Power Five conference champion. However, this idea was unreasonable. Nobody reports a loss for this, of course, but nothing really has happened yet. Everything sensible, everything achievable is still on the table for these Utes.

Utah can still win the Pac-12 South, Utah can win the Pac-12 championship game, Utah can play a Rose Bowl for the first time in program history. None of these targets were taken from the Utes in Provo. Utah is playing for a 14th game. Not 12, not 13, but 14. Playing a 14 is always part of the long-term goal.

Did BYU go well? No. Are there things to fix? Yes sir. Is Utah in a dire situation? Ha no. Is the season “over” as some believe? Hahahahahaha, no.

Relax, circumnavigate the cars, get comfortable, and let’s see what happens in San Diego state on late Saturday afternoon. More importantly, let’s see what happens against Washington State on September 25, because that’s when it really matters. If we sit here in the days after September 25th and things don’t get any better, then we can reconsider how we see the rest of this season.

For your information, there is no need to thank me for serving as the moral compass of the Utah fan base. I like to do this as a public service.

What’s on my mind, Utah or otherwise

• Charlie Brewer is Utah’s quarterback, and there’s no good reason why he shouldn’t be. On the list of issues, or at least things to be fixed / tweaked, Brewer’s game may not even break the top 10 with two games. I do understand, however. It was a frustrating loss, the offense was shaky so the quarterback gets a lot to blame. Find another hill to die for, fans.

• This is not the last time we have heard Tavion Thomas. Micah Bernard has the juice right now and earned the right to see an extended role off the backcourt, but Thomas is too good, bringing too much to the table to toss aside after losing two fumbles in as many games. Thomas will have a role in the state of San Diego. Bank on it.

• The atmosphere at LaVell Edwards Stadium on Saturday night was great. Loud, engaged, sold out, probably 95% of the fans in their seats at the kick-off at 8:25 p.m. Very impressive, very cool to see how everything develops from the press box. The field storms on the Horn were also fun. I love good field / court storming.

• The Prohibitive Pac-12 South Favorit USC was drilled by Stanford and is now looking for a new head coach. UCLA looks like it can beat anyone in the conference. The state of Arizona has yet to collapse in the face of looming NCAA sanctions. Colorado has almost beaten Texas A&M, and no one really knows what to think of Utah. Folks, the Pac-12 South is Pac-12′ing, and it’s not even October yet.

• Big win for Oregon in Ohio State as the Ducks established themselves as legitimate contenders for the college football playoffs, but again this is the Pac-12 so it would be premature to crown Oregon at this early stage. The Ducks gave up the Buckeyes 612 yards overall attack, including 484 yards through the air to quarterback CJ Stroud in his sophomore year. Some of this can be attributed to star edge rusher Kayvon Thibodeaux and five-star freshman linebacker Justin Flowe being injured and unavailable, but that kind of defensive performance should be enough to get everyone to pause, which is the long-term cap from Oregon is.

• Utah announced a schedule for 10 games without a conference on Thursday night, meaning the only schedule it had will not be filled. I wrote this down several times at this point, but let’s repeat it now that the schedule is complete. These staff did a good job of putting together a schedule in less than ideal circumstances. By the time they got through the door in late March, they had no MTE planned and were paralyzed with games against Sacramento State and Fresno State. I look forward to 2022-23 when employees have full control over the planning.

Q: “Is it fair to wonder if tragedy and turmoil have taken their toll on the coaching staff?” – @RockyMountainBK

A: This is obviously a question related to the death of Ty Jordan. I also see that as a wild overreaction to the loss at BYU.

In general, I don’t think this is an unfair thing to think about or ask about, but I’m not sure I have a good answer to it.

Has it taken its toll? Well, to a certain extent, I have to believe it. Life becomes more difficult, or at least different, when a loved one and / or someone you have cared for dies. Jordan was 19, a college freshman who had his whole life ahead of him. The circumstances surrounding his death were difficult, unfair and, unfortunately, avoidable.

Now remember that these men, Kyle Whittingham, running backs coach Kiel McDonald, the rest of the coaching staff, and even sporting director Mark Harlan had to be at the helm to help the players grieve, speak publicly on the matter and To help everyone move forward, to help everyone prepare for a season while trying to process their own emotions, their own pain, their own anger.

I’m not going to pretend I really understand how hard it was for the people at Eccles Football Center, but if it got to the point where it was too much for someone I wouldn’t blame anyone.

A: Cold Brew and Nitro Cold Brew are grossly overrated, mainly because I drink coffee to wake up, not to make my heart feel like it is trying to escape my chest.

Quick start guide: Cold brew, which typically contains twice as much caffeine, is nothing more than coffee grounds and water that is soaked together for at least 12 hours. I used to make cold brew at home and leave it in the fridge. It’s good. Nitro Cold Brew is a cold brew that is charged with nitrogen, which gives it a creamier texture. Big scream. Their most sophisticated on-site cafes have Nitro Cold Brew, and it’s not cheap. Take it for a walk.

I became a coffee guy when I was in my mid twenties. I regret it.

Q: “If you were Mark Harlan, how would you prioritize future non-conference planning with the conference realignment, the Alliance and the expansion of the playoffs on the horizon? Do intersectional games have more value (TV and use of Pac-12 playoff participation) than traditional local rivalries? Would you keep planning home and home with BYU, or would you prioritize two Alliance games (a B1G and an ACC) each year? ”- Emailer Lonnie

A: You guys who put three questions into one post really think you’re special, don’t you?

For this exercise, let’s assume that things go as planned and that at some point the ACC and Big Ten are playing all eight conference games, leaving four non-conference slots. Of these four, Utah will play an ACC school and a Big Ten school, so two non-conference slots are up for grabs.

Yes, I think intersectional games would have more value, both as a TV or streaming product and as a résumé for a spot in an extended college football playoff.

I don’t even think there’s much discussion there. Utah, which plays other Power Fives, is more attractive than Utah, which plays an FCS in the state, a group of five in the state, and so on for these two reasons. I’ll say the local matchups are important and a place in the over, but the landscape is changing and it still feels like the little guy is being squeezed out.

The last time I spoke to Harlan, BYU, and the Big 12 wasn’t official, so my thinking about the future of the Utah BYU series has changed a bit.

I think Utah-BYU is important. I think it should go on, I want it to go beyond the six scheduled games by 2030, but let’s be sensible. If you know you already play an ACC team and a Big Ten team every year, is it really a good idea to have a Big 12 team there every year?

I say no, but yes in a few years, play BYU. Don’t leave this streak behind, but playing the Cougars every year probably makes less sense than it did 10 days ago.