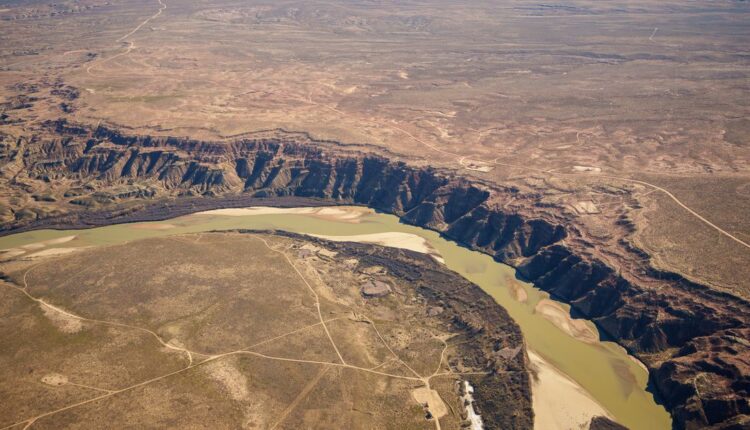 Back in the 1960s, a Texas company called Shamrock Oil and Gas Corp. drilled several wells on public land in a new oil and gas field called Horseshoe Bend, named for a prominent feature on the Green River in Utah’s Uinta Basin.

One well, called McLish #3, produced for two decades, yielding nearly 700 million cubic feet of gas before it was idled in 1987, when a new owner concluded it was no longer economical to operate, according to records on file with the Utah Division of Oil, Gas and Mining (DOGM). For the next 35 years, the well changed operators several times; each new owner tried unsuccessfully to eke a profit from it.

McLish #3 finally landed in the hands of Vernal oilman Mark Peterson, doing business as Hot Rod Oil, who was acquiring many marginal wells in the basin in the mid-1990s. Over the ensuing years, Hot Rod essentially walked away from the unproductive McLish wells without plugging them or remediating the sites, leaving the mess for federal land managers to clean up, according to DOGM records.

The federal leases expired and the wells joined a list of “orphaned” and “idled” wells proliferating across public lands in the West, a problem the Biden administration is now seeking to reverse.

“Portions of our federal lands have been neglected after years of prioritizing fossil fuel development above all other uses — ignoring the potential impacts to people, water, wildlife, climate, and the potential economic benefits of remediation,” Nada Culver, Bureau of Land Management’s deputy director for policy and programs, certified last year before Congress. “The cleanup of this past development has now been left to the taxpayer to remediate, instead of the liable party responsible.”

Now the BLM has decided to reissue the lease on which McLish #3 has long sat idle — but with a big catch. Whoever acquires the lease on this 159-acre parcel would be required to plug the well if they don’t put it back into production. They must put up a surety bond for the site’s reclamation before the lease would be issued under a decision the BLM released April 18, officially marking an end to the White House’s 15-month moratorium on oil and gas leasing.

“The well is in need of immediate attention, and the successful bidder should plan to perform work on the well soon after lease issuance,” states the decision.

Actually that’s not the case. In the months since the lease sale’s environmental review, the Interior Department’s well-plugging program caught up with the McLish wells.

How a Utah well became an “orphan”

June 1967: Shamrock Oil and Gas Corp., based in Amarillo, Texas, drills the McLish #2 and #3 well near Horseshoe Bend in Uintah County.

1984: Alta Energy acquires the McLish wells in 1984, and soon idles Mclish #3 when it is no longer economical to produce natural gas from it.

March 1987: Columbia Gas Development Corp. of Houston buys the well in March 1987 and was able to produce 611,000 cubic feet, before again idling it the next month.

1989: Columbia brings in a drill rig to “work over” the well in an unsuccessful bid to bring it back into production.

October, 1992: The city of Nephi acquires the wells.

October, 1994: Hot Rod Oil of Vernal acquires and brings them back into marginal, intermittent production.

A BLM-hired contractor plugged McLish #2 on Dec. 1 and McLish #3 on Dec. 3, according to the wells’ permit files maintained by state regulators. But well sites may still need surface reclamation

Regardless, the McLish site will be the one and only parcel offered at BLM’s next quarterly auction for Utah, to be held online June 28, the first since December 2020. Under a court order, the Interior Department is offering leases for the first time since Joe Biden was sworn in, succeeding a president who declared climate change a hoax and offered far more Western public lands for oil and gas development than the industry could even bid on.

Interior Secretary Deb Haaland has ordered a resumption of leasing, but under a more deliberative program in accordance with reforms recommended in a report released in November. In an effort to discourage speculation and ensure a better return for the American public, offerings will be far smaller than what the industry asked for, operators will pay a higher royalty, and minimum bids and annual rents will be increased from the current $2 an acre .

The BLM has hiked the royalty rate on new leases by half to 18.75%. The rent and minimum bids will not be increased for the leases sold in the June sale.

“The only thing that will materially bring down the cost of gasoline over the long term is a sincere effort to increase domestic production, which would be a very different set of policies than we see from the administration currently,” said Rikki Hrenko-Browning, President of the Utah Petroleum Association. “Here in Utah, we, along with our members, look forward to working with the administration on policies that can actually help increase production and provide relief to consumers and strengthen our energy security.”

(Trent Nelson | The Salt Lake Tribune) The Three Rivers field west of the Ouray National Wildlife Refuge, pictured on Nov. 17, 2001, is among Utah’s most productive oil and gas fields. This photograph was taken on a flight chartered by LightHawk.

For the Utah sale, the BLM considered just six parcels on 6,645 acres from the nearly 100,000 acres “nominated” for leasing since the beginning of 2021. Four were on the Green River near Horseshoe Bend, 10 miles south of Vernal. The area has a long history of drilling. Within a mile of these parcels are two producing, six idled and 28 “abandoned” wells, industry parlance for plugged wells. Also on the list were single parcels each in Grand and Emery counties.

Ultimately, the BLM decided to offer just the 159-acre quarter-section with the McLish well in a plan dubbed the Recreational Resources Preservation Alternative. The public or industry may file a protest against the decision before May 18.

That parcel is one of 173, totaling 144,000 acres, the BLM is auctioning in June in several states. It will be the first round of auctions since December 2020, when energy prices were badly depressed under the weight of the pandemic. Now two months into Russia’s invasion of Ukraine, oil prices have skyrocketed and the industry’s interest in public lands is picking up.

“We knew lifting the leasing ban wouldn’t jump-start production, but it would send a message to the market that help is on the way,” said Thom Carter, director of the Utah Office of Energy Development. “What we see in Utah, which is so minimal, won’t send the kind of message we need to send to the market.”

Interestingly, the Trump administration flooded the market with federal lease offerings at a time of historically low oil and gas prices. The situation is now completely reversed with sparse offerings coming forward at a time of astronomical prices.

Even with today’s thirst for oil and gas, however, it seems unlikely anyone would risk bidding on the Utah parcel, which has already been tapped and abandoned.

According to the BLM, Hot Rod will remain obligated to reclaim the site if the parcel fails to be leased and the agency holds a bond from the company, although it is unclear whether it would be sufficient to cover the well’s reclamation costs.

At the last auction in 2020, the BLM tried and failed to lease another Utah parcel encumbered with an unplugged well, according to leasing records.

This 40-acre tract in Grand County was once part of a much larger lease issued decades ago to Ambra Oil and Gas in the Cisco Springs oil and gas field north of Interstate 70. Ambra drilled the TXO Springs 9-1 well in 1981 and produced nearly 300 million cubic feet of gas from it, according to the well’s DOGM file. But by the early 1990s the well stop producing and the BLM instructed Ambra to plug it and other “temporarily abandoned” wells in the Cisco field.

Instead of plugging the wells, Ambra sold them and they wound up in the hands of a Colorado company called Falcon Energy LLC, whose principal Wayne Stout died in 2015 without ever resuming production from TXO Springs 9-1 or plugging it.

The site remains unreclaimed, awaiting a plug job courtesy of US taxpayers unless the BLM can find a new lessee.