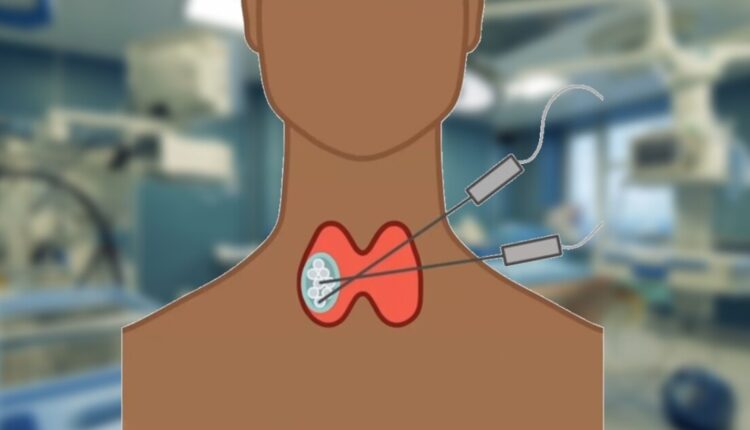 “This was really easy!” Linda Mumford said of the procedure she underwent this summer.

It was three years ago when Mumford found a node on her thyroid. At that point her only option was to undergo an operation, leaving a massive scar and forcing her to remain on medication she would have to take the rest of her life.

Or Linda could wait and see.

She chose to wait and see despite not knowing whether or not the node was cancerous. Experts say in these cases, they can’t know for sure until they are removed.

Last December, Mumford’s doctor informed her of a new procedure that was now being performed at Huntsman with minimal risk, eliminating the node and ending her wait.

“Not having to worry anymore, it being cancer, is awesome. And it’s gone now,” Linda said with a big smile.

dr Dev Abraham says Radio Frequency Ablation, or RFA, is a great addition to the armamentarium of treatments available at HCI.

“It’s truly a worldwide increase in the detection of thyroid nodules. It’s actually quite common,” Dr. Abraham explained, going further into how RFA works, “We connect the patient to literally a radio frequency generating machine. The needle does not generate heat. It merely causes vibrations of ions in the tissue. You position the needle in different locations and cause minor burns and the tissue loses viability and the body dismantles it as dead tissue.”

The procedure works by creating heat within the node, changing its makeup. It’s used on thyroid nodules that may be cancerous or benign.

“The whole node is basically cooked with heat,” said Abraham.

He says that’s how a more invasive surgery is avoided. Surgery is still a viable option for larger masses, but Abraham says in most of the cases, RFA is a better alternative.

“During general anesthesia, you won’t know about a patient’s voicebox nerves and complications until much later when they wake up. Here you can talk to them during the procedure and you know everything is okay. This can minimize complication risks to very low levels , less than a percent.”

It is also significantly less expensive. RFA is estimated at roughly $5,000, compared to $25,000 or more for surgery.

But for Mumford and her family, the peace of mind it provided was priceless.

“The actual procedure was really easy. Like it wasn’t awful at all,” said Mumford. “It was easy and I don’t have to worry about it again. That’s awesome.”

Linda says she went on a trip the very next day and was back to volunteering at the Natural History Museum of Utah immediately. She says her 9 year old daughter didn’t even know she’d had anything done, but her husband was very grateful for the peace of mind the procedure provided, knowing that the node that has caused so much concern was eliminated.

Only a few locations across the country offer the RFA procedure, and Dr. Abraham is performing all of them at the Huntsman Cancer Institute. He has been doing similar ultrasound guided procedures for the past 25 years. And like in Mumford’s case, the new RFA has proven to be a successful new alternative to surgery for those with thyroid nodules.