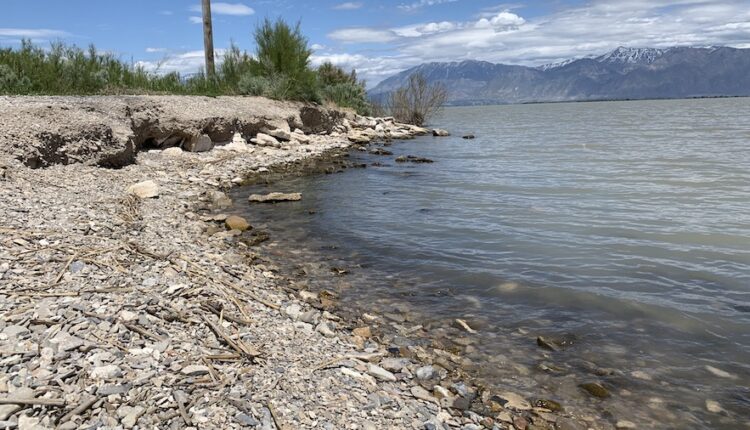 UTAH COUNTY, Utah — Over the past 150 years, Utah’s population has grown and naturally occurring ecosystems have shrunk. Which has made Utah Lake a little sick.

“The water quality in Utah Lake has been damaged over the years by pollution,” Eric McCulley, project coordinator for the Provo River Delta Restoration Project said.

The Lake’s health is in jeopardy in part because those shrinking ecosystems are comparable to the Lake’s vital organs.

“It’s like a kidney transplant for Utah Lake,” McCulley said. “We’re giving it what it needs to improve the situation out there.”

McCulley works with the Utah Reclamation, Mitigation and Conservation Commission. It’s a small federal agency with a big task — restoring 260 acres of delta land between the Provo River and Utah Lake.

“This project has been in the making for 10 years,” said Michael Mills, executive director of the Utah Reclamation Mitigation Conservation Commission.

The stretch of land was dictated 150 years ago and developed for agriculture.

“It was actually part of Utah Lake before the dike was put in,” McCulley said.

Now the dike has been demolished, the land has been acquired, and most of the vegetation work is done too with native plants in the ground.

“We’re looking at tens of millions of dollars that go into a project like this,” Mills said.

The funding is mostly federal and made it possible to restore the habitat for an endangered species of fish called the June Sucker.

“It’s come back from the brink of extinction and this project is going to provide an area for it to fill out one of their natural parts of their life cycle,” McCulley said.

However, the restoration will not only benefit the endangered fish.

“One of the criticisms we sometimes encounter is ‘oh you’re spending so much money on a fish.’ we don’t really see it that way,” Mills said. “Yeah, the fish benefit, but so does every other animal that relies on Utah Lake. The human population benefits.”

When it rains, all of that water flushes through our streets and cities, bringing contamination with it.

“Those things are absorbed in the vegetation before it goes into Utah Lake, so yes this will have a significant improvement of water quality going into Utah Lake.”

Water will run in several channels through the delta into Utah Lake once The Commission redirects Provo River — which they plan to do early in 2023.

It will act as a natural flooding buffer too when the Provo River or Utah Lake experience high water levels.

“It will also increase our resilience to climate change in the future and changes in weather,” McCulley said.

The area will feature a trail system and boat launches for people to recreate.

“We think it’ll be a draw for families to come out here and just enjoy a different type of recreation, right next to a huge population center,” Mills said.

For these natural resource managers, being part of a habitat restoration so large is special.

“It’s really compelling that we can actually turn back the clock of where we are giving rivers more room now to function naturally,” McCulley said.

There is a section of the Provo River Trail near alligator park that is temporarily closed for the work. The mitigation commission is working on a detour, but say that’s still a few weeks out. They hope to release water into the delta this January.