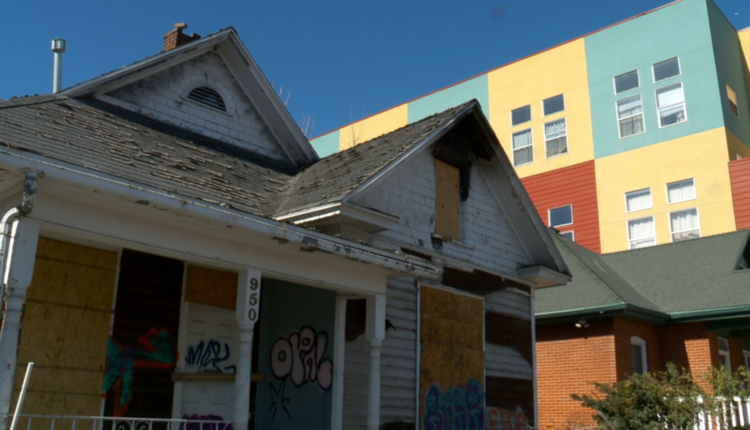 SALT LAKE CITY – Approximately 140 homes in Salt Lake City are currently empty and boarded up. One of the reasons could be a regulation drawn up nearly a decade ago in response to the infamous “sugar hole” that stood empty for years in Sugar House.

Now a frustrated Utah developer says the city’s ordinance is out of date and allows squatters.

Irvine Construction and Realty owns three houses on South Washington Street, two of which are covered in graffiti. The company has wanted to demolish the houses for months as it plans to develop a new affordable residential complex.

“It was a hassle,” said Dan Scarlet, the company’s CFO. “The boards told the homeless that this is an empty house … We couldn’t demolish these houses without first obtaining planning permission to build the replacement lot.”

Last week, Scarlet returned to one of the houses and found that some of the house’s plywood windows had kicked in. The ceiling appeared to be charred with several large holes. Someone lit a fire.

He was clearly frustrated.

“Think of the danger this poses! The fire problems. The drug use. All of these things, ”said Scarlet. “I haven’t even been notified! So I didn’t even know [there was a fire] Until I’m here this morning to meet you “

“There were six or seven people in the basement of this house,” said Orion Goff, the city’s director of building services. “Everyone could get out.”

The ordinances have been updated several times since 2012, initially with the city council’s decision to make it more difficult for developers to demolish buildings without a new building permit.

The city council chose to issue the directive in response to a contractor who suddenly stopped building after the Sugarhouse property was demolished. The “Sugar Hole” stood empty for years from 2008 onwards.

“It seems silly to have a whole city policy in one situation,” Scarlet said, “and 2008 was a financial disaster for a lot of people. It was an anomaly.”

The regulation was updated in January 2021 to make it easier for developers to demolish buildings. Current law allows developers to provide the city with a “letter of confirmation” promising that housing units will be replaced one-on-one.

“It’s not a good situation to have these empty houses,” said Goff. “The neighborhood hates these buildings for obvious reasons.”

Irvine Construction and Realty was finally approved for demolition in February. Goff said he accepted the letter of assurance because the developer is replacing three houses with approximately 200 units. Even so, Scarlet said he was frustrated with a cumbersome approval process and didn’t know about the confirmation letter until he worked the system for months. He said he believes the city’s policies allow squatters.

“I don’t think it was intentional, but we have to change that rule,” said Scarlet. “We have to fix this. It’s just backwards. “

Irvine Construction and Realty said it was particularly confused about how a policy requiring one-to-one swaps of housing units would apply to a boarded-up house that is not habitable. Scarlet argued that even a vacant lot would be better than an eyesore that attracts squatters.

“You’re making a really good point, but the regulation doesn’t take that into account,” Goff replied. “The city council is keen to get this right. They are very focused on affordable housing … Logically, having a vacant lot is much better than one of those pesky objects that puts neighbors and first responders in such a bad spot. “

Goff said the city’s system worked as planned on this case, but there is still room for improvement. The city council is currently working with an advisor to draft a new housing harm reduction ordinance.

“It needs more studies and it has to be done in its own process,” said Goff. “I would expect that in the next few months we will have a good idea of ​​what this housing loss ordinance will look like.”

“We need to find a way to streamline this process and work with developers to try to rebuild and revitalize the city,” Scarlet said. “They changed the zoning rules in this area to encourage this kind of development. We just need the rest of the process to keep up with the vision they had for this area. “