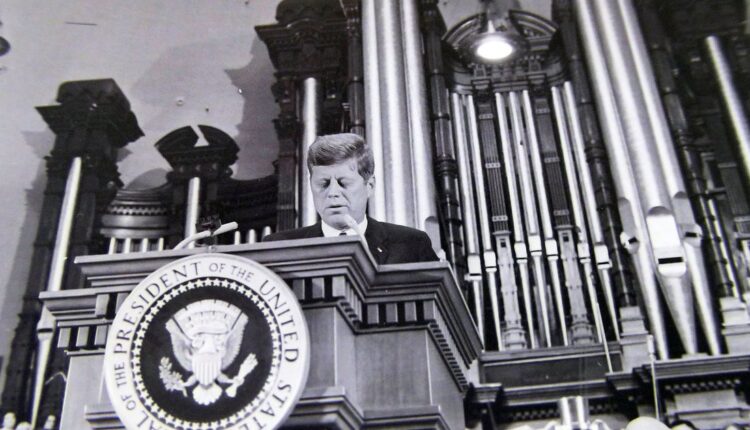 Dream big, build big, used to be the American way

American infrastructure spending used to be an area of ​​genuine non-partisanship.

In a speech at Salt Lake City Airport in September 1963, two months before he was assassinated, President John F. Kennedy focused on the scarcest resource in our arid state – water.

In the words of the young leader, “So water is the key, water management … is the key that will open a very bright future.” Kennedy stood in front of the cameras and next to Utah Democratic Senator Frank Moss and pressed the button a buzzer that activated the first generator at Flaming Gorge Dam, and an engineer confirmed, “Mr. President, the generator is now running at full speed. “

This was US infrastructure built to last.

Half a century later, Utah is the fastest growing state in the nation – and even drier. A brewing water war between the western states over the Colorado River centers on a planned pipeline – a pipe dream in an era of mega-drought – that would continue to drain Lake Powell towards a sprawling St. George. The booming retirement mecca of our state is still littered with green golf courses bordered by an extensive red rock desert suitable for turtles, lizards and anthills.

This mirage of growth amid shrinking water sources was not what the Utahners had in mind in 1963 regarding the future of Beehive State.

Last week, President Joe Biden signed a breakthrough infrastructure bill that will bring much-needed resources to Utah. Of Utah’s federal elected officials, only Senator Mitt Romney voted in favor. Senator Mike Lee and Reps. John Curtis, Blake Moore, Chris Stewart and Burgess Owens voted against the billions of dollars for new roads, bridges, airports and broadband. All five have spoken out in favor of tax cuts, especially for the rich. But where are their voices on common good projects that serve as muscles in our vast, interstate trade-dependent country? Utahners who get up to work early and come home late – and then do it all all over again – seem to be the ones forgotten in these partisan calculations.

American infrastructure spending has been an area of ​​true bipartisanism because of its popularity. It benefits everyone. One of us, a freshman, is old enough to remember the Federal Aid Highway Act under Republican President Dwight Eisenhower, and later Democrat Lyndon B. Johnson’s Great Society initiatives. The other writes as a Utahner with deep family roots in the Milford Valley, a remote area that reflects both the past and, hopefully, the future of Utah. Once home to Union Pacific trains, Milford is now surrounded by fields of solar panels and wind farms amid sagebrush plains and pig farms.

The Biden government’s successor legislation “Build Back Better” has been passed by the House of Representatives, but has not yet passed through the almost equally divided US Senate. This program, if approved, will invest in human infrastructure in our neighbors, including universal grants for pre-school education and childcare; an expansion of the child tax credit, which halved child poverty in the United States; lower cost of prescription drugs, such as life-saving insulin; Expansion of Medicare and Medicaid; affordable housing; clean energy alternatives; and much more.

In August 1964, less than a year after JFK’s death, Lady Bird Johnson inaugurated the Flaming Gorge Dam when she visited the isolated Dutch John, Utah, where US Bureau of Reclamation staff lived.

“No one can follow the trail I’ve been following for the past four days without capturing the spirit of the west,” she said. “It was the spirit of adventure that made brave pioneers and brave cross-border commuters – the optimism that led men and women to dream big and build big.” After her speech, the first lady attended a local BBQ.

Dream big. Build big. The American way of yesterday – or also of today and tomorrow?

Aside from Romney, the Utah congressional delegation seems to have forgotten the power of big dreams that can lead to big projects in our big country. Perhaps that’s because they’re trapped in the petty politics of diversion and division within a fragmented GOP that Ronald Reagan would not recognize. Many hard-working Utahners, from Daggett to Kane to Tooele, have not forgotten. Their livelihood depends on such projects.

Historic infrastructure investments across our country are overdue and make sense. The mega-drought in Utah doesn’t seem to be over for a long time, as hydrologists predict poor annual snow cover, a disappearing Great Salt Lake, and significant population growth. Californians and Texans, among others, discovered Utah on a grand scale. Many more people will follow in the years to come.

And the generators at the 150-meter-high Flaming Gorge Dam? They are now almost six decades old and still supply the Utahner with hydropower.

John Zaccheo, a 94-year-old Rotarian, is a former pizza and Italian restaurant owner and general manager who has lived in Utah for nearly five decades.