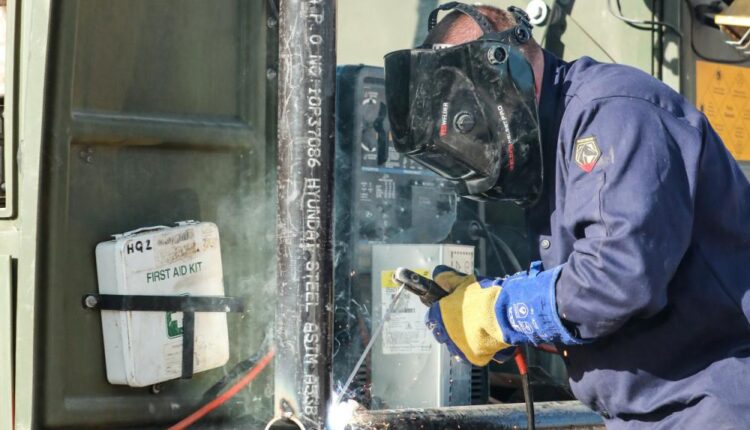 Vernal, Utah– Soldiers from the 1457th participated in an annual training exercise they won’t forget soon.

Engineers from the 116th Engineer Company and support personnel for the Forward Support Company– about 125 Soldiers in all– contributed to rehab and upgrade projects across several sites at Dinosaur National Monument, near Vernal.

“We provide the labor and are able to get [military occupation specialty] (MOS) training,” said 1st Lt. Caleb Brown, executive officer of the 116th.

According to him, it paid off.

“This will have a big impact on our unit readiness,” said Capt. Shayne Chadwick, commander of the 116th. “We had a great time. We were able to build good unit cohesion and give all our Soldiers excellent training.”

The 116th is composed of four platoons and a headquarters section. First and second platoons are made up of vertical engineers—they are the carpenters, plumbers, and electricians. Third platoon are the horizontal engineers. They can move earth and build roads. Fourth is the maintenance platoon, and those Soldiers keep operations going by making sure equipment is running.

The park service leveraged all the 116th skills for improvement projects across the monument.

In all, there were six separate projects: three different campsite restrooms, two cattle guards, and a road in need of attention.

Near the operations center, 1st platoon worked on two restroom facilities. In one, teams of carpenters and electricians renovated the interior of the decades-old structure, making it more functional and compliant with the Americans with Disabilities Act (ADA).

“We started with the demolition and took out all the fixtures,” said Staff Sgt. Kaydee Taylor, a horizontal construction supervisor with the 116th. “We discovered an ant infestation, so we decided to remove all the old framing. Then it was on to electrical and plumbing.”

Down the road a few hundred yards, two other sections improved other restroom facilities. At one, Soldiers installed a new ADA-compliant concrete path and plumbing for a wash station. At another, crews dug a trench and installed a new water line to replace the old cast-iron line that had long ago deteriorated.

“This is the type of work we love because it’s something we might see on a deployment, and it’s also contributing to our community,” said Spc. Hans Hurst, a horizontal construction engineer with 3rd platoon. “It’s a great opportunity to run the equipment and do something real with it.”

Meanwhile, the 1457th’s Forward Support Company was just down the river two bends.

“The FSC was great. They gave us sustenance and logistics support, which allowed us to focus on training,” said Brown. “Aside from the food, which we loved, they hauled fuel for us and provided other hauling capability to augment what we have organic to our company.”

“Our Soldiers did excellent work during this annual training,” said Forward Support Company first sergeant Ross Francis. “My distro platoon drove and worked their guts out providing fuel, delivering construction material and food runs that accounted for over 10,000 miles driven.”

Additionally, the food services section competed at the regional level of the Philip A. Connelly Program during the training period. The program’s goal is to increase “food service excellence executed by culinary specialists resulting in the presentation of extremely gratifying dining experiences” for Soldiers, according to the program website.

Francis said that his Soldiers have some of the best work ethics he has seen in his career.

Mission planners consistently referred to this annual training as “IRT,” which stands for innovative readiness training. It’s a package that requires special approval because it’s outside the conventional training that National Guard units typically do, according to Sgt. 1st Class Garth Johnson, the readiness NCO for the 116th.

Johnson, along with Staff Sgt. Moreno, the 116th training noncommissioned officer, did much of the planning.

“Having a dedicated pool of manpower to get the projects going made this whole thing come together,” said Brown.

It took over a year to plan and organize. Broen, Johnson, and others conducted several site visits and negotiated with Dinosaur National Monument officials to choose the best projects. Then, they had to schedule a time to close down large parts of public campsites and ensure the Soldiers could conduct operations in an environmentally safe way.

They began work June 6 and concluded operations on the 16th.

He is the subject matter expert on all things construction for the unit, and makes sure the work product meets mission requirements, including standards of building codes.

“Doing construction in Afghanistan is very different from doing it here, for example,” he said. “So this is a good opportunity to train on our technical skills in a new way.”

“This event was important because it allowed us to make good relationships with the National Park Service in addition to the valuable training we got,” said Chadwick.

“I’m really pleased with the cooperation all around,” said Johnson. “And not just among our Soldiers and the National Park Service, but up and down our formation. We made a handshake with the park service that Soldiers can benefit from in the future.”

One of the greatest benefits of the IRT was that engineers got to see their work from start to finish.

“It is real world and not just a scenario. Our guys get to put their hands on tools and see a real-life end result they can be proud of,” said Sgt. 1st Class Thomas McKenna, platoon sergeant for 1st Platoon.

“We have METs [mission essential tasks]said Massey. “Our Soldiers here have a project that gives them a wide range of MET training.”

Innovative training packages can also be an opportunity to grow new leaders.

Spc. Hurst was made project noncommissioned officer in charge of one of the cattle guard projects.

“As a specialist, that’s helping me develop myself for future roles and advancement in my military career,” he said.

“Our platoons have multiple projects going on at once. The platoon sergeants and platoon leaders have to divide their time and let their E-6s lead each project,” said Chadwick.

“I like watching the growth in the younger NCOs. We put Soldiers in charge who might not have had as much project development time,” added McKenna. “This training gets our NCOs the type of training and they can stretch and grow. Eventually someone is going to have to replace me. NCO development is what’s going to carry us forward from this.”

Perhaps just as important, Soldiers enjoyed their time, according to Brown.

The 116th set up their operations center and sleeping quarters next to the Green River at Split Mountain Campground under the shadow of several hundred-foot cliffs.

“We could ask for anything better with the view and the projects we’re working on,” said McKenna.

“This has been an unforgettable [annual] training,” said Johnson. “Morale and esprit de corps has gone through the roof.”

“Ultimately, it’s great for our Soldiers because they get to build something lasting,” added Brown.